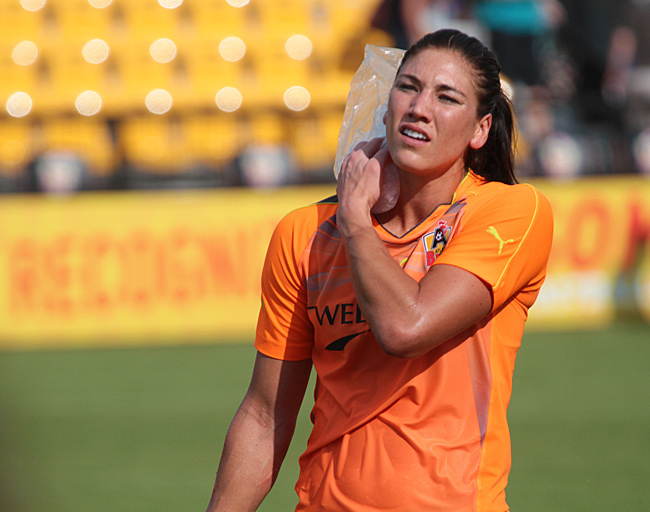 Gold Pride could have clinched a playoff spot with a win, but instead will attempt to earn their first-ever post-season berth this coming Saturday, August 7, at CSU East Bay when the Red Stars come to town.

Atlanta controlled much of the action for the opening ten minutes, creating opportunities that should have created at least one goal. The Beat showed its speed in the sixth minute, with Eniola Aluko and Lori Chalupny both beating the Pride's offside trap as Aluko raced to the ball and dribbled into the box.

With Chalupny wide open to her left, Aluko elected to shoot, forcing Gold Pride keeper Nicole Barnhart to make a lunging save, punching it out for a corner that the Pride defended. If Aluko passed it to Chalupny, she would have had a wide-open goal with Barnhart guarding the near post.

FC Gold Pride was able to fend off the initial pressure that Atlanta put on them, and regained their possession-style game after the 10-minute mark. Camille Abily ripped the first Gold Pride shot in the 11th minute, a deflected ball that Beat keeper Hope Solo saved with ease.

But despite the possession shifting in favor of the Gold Pride, Atlanta had another great chance to net the game's first goal.

Chalupny sent Aluko to the races. The English international beat Pride and Canadian international defender Candace Chapman to the ball. Aluko beat Chapman off the dribble and freed her left foot but whistled her shot wide of the target in the 20th minute.

Gold Pride got its best chance of the first half in the 25th minute. Tiffeny Milbrett send a grounded through-ball into Kelley O'Hara's feet. O'Hara’s first touch was a shot at goal, beating Solo to the far side, but it dinged the post and bounced out. Tina Ellertson cleared it; Gold Pride got the possession back and Shannon Boxx took a shot that Solo stabbed to put a halt to the Pride efforts.

Things cooled down in the following several minutes until Ramona Bachmann, returning for her first match since the All-Star Game, took on Chapman one on one. She was able to get a shot, but it was deflected by the defender, and Barnhart made the save in the 34th minute.

Solo showed why she's arguably the world's best keeper in the 42nd minute. Boxx ran onto a ball Solo punched away and sent a cross back into the center of the box. O'Hara hit a headed toward the lower 90, but Solo made a diving save on the goal line, pouncing on the loose ball to stop the Pride rally.

A couple tries at goal by Boxx during extra time was not enough to beat Solo and the two teams went into the half scoreless.

Marta, after hardly having any touches throughout the first 45, began to pick up a little steam in the early stages of the second half. Within the first five minutes, she took three shots at goal — two with her feet and one with her head — but nothing was on target.

Also struggling in the first half was Christine Sinclair. She had her first opportunity in the 56th minute. Boxx sent O'Hara into the box where she took a shot that was blocked. On the rebound, Sinclair chested it down but her shot went high of the target.

Atlanta made its first chance of the second half on a counterattack in the 61st minute. Bachmann streaked down the right flank and squared it to Chalupny who took a shot that Barnhart saved nicely.

The Gold Pride followed the Beat chance with two of their own in a single sequence.

On the initial chance, Milbrett received a Sinclair pass and sent it into Boxx at the top of the box. She headed it to her foot and took a shot that Solo dove all-out to punch away. Gold Pride retrieved the rebound and sent it back in the box where Milbrett flicked a shot that hit the crossbar before Solo grabbed it.

Solo continued her remarkable performance with another diving stop in the 67th minute. O'Hara, coming from her left midfield position, cut into the box before unloading a shot for the far post. Solo, like the save on Boxx a few minutes earlier, dove fully horizontal to punch the ball away from goal.

Gold Pride defense showed why it has allowed the fewest goal in WPS, with Chapman and Becky Edwards defending shots by the Beat's Bachmann and Chalupny in the 71st minute to keep the game scoreless.

Ali Riley suffered what appeared to be a hip injury in the 74th minute. On the Beat's next possession, they attacked Riley, who was first to a ball that was sent towards Monica Ocampo. Riley attempted to head it to Chapman, but had no power behind it, allowing Ocampo to get the loose ball and fire a shot at goal that went high of the target. Riley came out before the Pride took its goal kick.

Ocampo challenged Kristin Graczyk (Riley's replacement) in her next touch in the 78th minute. Ocampo crossed it toward Bachmann who won it away from Rachel Buehler and took a shot for the far post but missed wide.

Sinclair had her, and the Gold Pride's, best chance of the game in the 90th minute. Kandace Wilson brought the ball down the right side and fed Kiki Bosio. Bosio beat her defender and sent a low cross into the box that Sinclair was first to. Her first touch was at goal, and it drilled the crossbar.

It was the last chance of the game, and the two sides ended in a scoreless draw.