Share All sharing options for: Washington Freedom heads to FC Gold Pride in need of points 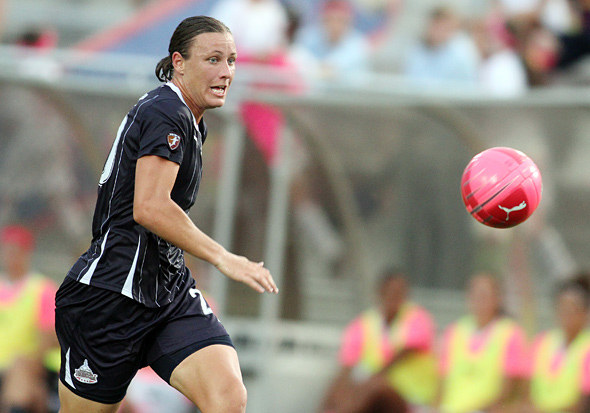 Abby Wambach and the Washington Freedom will be looking to deny FC Gold Pride in their quest for the best regular season record in WPS. Photo: Tony Quinn, isiphotos.com

FC Gold Pride already clinched its playoff spot. Everything they do from here on out is just gravy, leading to an almost guaranteed spot in hosting the WPS Championship on Sept. 26. For the Washington Freedom — and every other WPS for that matter — it's not as cushy.

Washington (5-8-6, 21 points) is currently in a tie with the Chicago Red Stars for fifth place, a point out of playoff spot. And with only five games remaining, the Freedom have some work to do, especially with the team right in front of them, Sky Blue FC, having a game in hand.

A win against the league leaders on Saturday night at Pioneer Stadium would help instrumentally in making that push for the playoffs.

"This is the end of a stretch that has had us on the road for most of the matches," said Freedom coach Jim Gabarra. "Three points are always important but we feel that it is still on our control with three home matches left."

Gabarra received a vote of confidence by the Freedom organization after his club went 11 games between wins. Washington added former Red Stars coach Emma Hayes as a consultant to help the club in the stretch run.

"She will give us a different perspective and another resource to help us reach our goals of getting in the playoffs and winning a championship," said Gabarra.

In three meetings this season, FC Gold Pride (12-3-3, 39 points) has won twice — once at home; once on the road — and tied the other at home. This will be the third match on the West Coast between the two.

"I believe we have played well in all three of our matches with them," said Gabarra, whose club allowed one, three and four goals to its opponent in the matches. "What needs to be different is our defensive discipline and intensity level."

With a win and a loss by the third-place Boston Breakers (Sunday vs. Sky Blue), FC Gold Pride will clinch a spot in the Super Semifinal on Sept. 22 or 23 (to be determined); a Gold Pride win and losses by both Boston and second-place Philadelphia (Sunday vs. Atlanta), the Pride will need just a single point in its remaining five games to clinch the WPS regular-season championship.

Kickoff for Saturday night is at 7 p.m.