Wondolowski, Cannon help get San Jose Earthquakes back on track

Share All sharing options for: Wondolowski, Cannon help get San Jose Earthquakes back on track 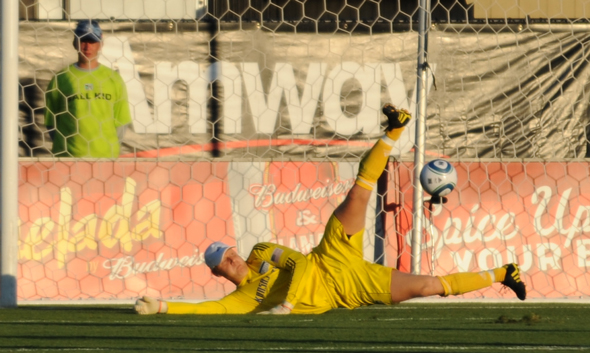 After two straight 1-0 losses in league play, the San Jose Earthquakes reversed the tables by defeating the Kansas City Wizards by the same scoreline. Providing the heroics were two players that were instrumental in the Quakes' early season success: Chris Wondolowski accounted for the goal with a wonderful strike in the 35th minute, and goalkeeper Joe Cannon returned to the starting XI and made seven crucial saves to record his sixth shutout of the 2010 season.

In a game that was hyped as a "must-win" by Earthquakes players and coaches during the week leading up to the Saturday evening contest, newcomer Khari Stephenson provided the catalyst for a fine first half effort from the team in earning a one-goal lead. The Jamaican international was named a starter in his debut, and expertly stepped in to the roll of attacking midfielder. He provided the crucial assist on the Wondlowski goal by sending a 30 yard pass over the defense and right on the foot of the Quakes' forward.

As Stephenson tired in the second half, and San Jose began to cede the majority of possession to the Wizards, Cannon rose to the challenge to make four expert saves over the final 45 minutes. Helped by a disciplined back line that earned three offside calls on apparent Wizard goals, Cannon did not disappoint in his return to the starting line-up after a six game absence.

Come back soon for the complete Match Report. In the meantime, enjoy audio interviews with Earthquakes players Jason Hernandez, Joe Cannon, and Chris Wondolowski, along with the gaffer Frank Yallop.