Share All sharing options for: FC Gold Pride books a spot in the WPS final with win over Chicago 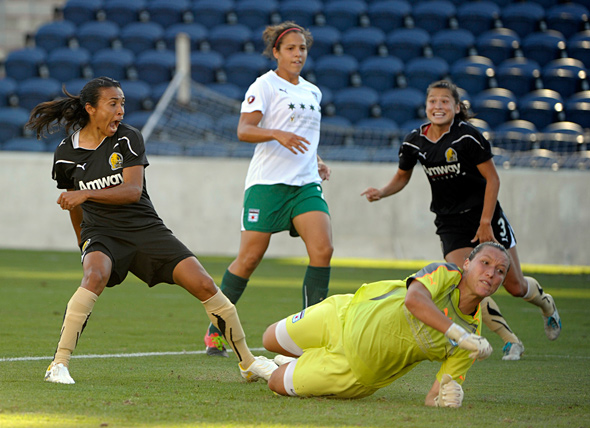 In an up-and-down affair with lots of playoff implications, Women's Professional Soccer's league leading FC Gold Pride (13-3-4, 43 points) broke out of its three-game goalless slump to beat the sixth-place Chicago Red Stars (5-11-6, 21 points), 3-2, at Toyota Park on Sunday night. The win, coupled with losses by second-place Philadelphia and third-place Boston, guarantees the Pride the WPS regular season championship and a berth in the WPS Championship match, which they will host on Sept. 26.

“We went from finishing at the bottom last season to being on top, so we are ecstatic," said Albertin Montoya, FCGP head coach. "Coming back strong in our second season and finishing in first means a lot to the entire organization.  I want the team to really enjoy this moment because they earned it, but we also need to keep in the back of our minds what happened to last year’s regular season championship team in the finals.”

That side, the now defunct Los Angeles Sol, limped to the championship after being the class of the league for the majority of the season, and was defeated in the WPS final. Montoya will be working hard to ensure that his team doesn't suffer the Sol's fate. Gold Pride will begin its prep for the championship game with its remaining four matches, starting Saturday, Aug. 28, at KSU Soccer Stadium in Kennesaw, Ga., against the Atlanta Beat. Chicago has two games left and, while still mathematically in the hunt, will need a lot of help to finish in the top four of the league.

FC Gold Pride hadn't scored a goal in three full matches heading into this tilt at Chicago, but it only took a little over seven minutes for the Pride to get on the board and end their goal-less streak at 279 minutes.

Ali Riley made a long run from her left back position, running onto a Rachel Buehler long ball to get behind the Red Stars defense. When keeper Jillian Loyden committed to Riley, the rookie defender slid a pass to Marta who tapped in her 14th goal of the season for the 1-0 lead.

After the Pride got on top, Chicago fought back. In the 13th minute, Megan Rapinoe got a pass at the top of the box from Cristiane. Rapinoe turned, beat Buehler and took a strike at goal that Nicole Barnhart dove to stop.

Then, just five minutes later, the Red Stars did what no team had done in over three games: score against the Gold Pride, a team which had put together three successive clean sheets. On a quick counter in the 18th minute, Formiga fed Cristiane out on the left flank. The Brazilian international took a couple of touches and sent a sizzling cross into the box that Barnhart mishandled, giving Ella Masar a chance at the ball, which she tapped in to equalize the match.

Gold Pride got its next opportunity in the 28th minute. Tiffeny Milbrett was alone in the back, running onto a through ball but Loyden raced off her line to beat Milbrett to the ball and clear it away.

Five minutes later, the Pride took the lead again. Buehler notched her first goal, and the second of her career, off a set piece. Taking a corner, Milbrett struck a low liner headed toward the top of the goal mouth and Buehler ran to the spot, contorted her body and directed it into the net for a 2-1 Gold Pride lead.

Buehler's chance was the last real action of the half, aside from Marta (43rd) and Formiga (45th) getting yellow cards for decent and malicious tackling, respectively.

Chicago opened the second half with a defensive miscue that FC Gold Pride nearly converted into a third goal. However, the defense of the Red Stars tracked back to prevent anything from developing.

Chicago threatened in the 48th minute. Casey Nogueira sent a lofted ball to the middle of the box from the right flank and found Katie Chapman, but she volleyed the cross just over the bar.

Cristiane and Rapinoe teamed up and nearly got the tying goal in the 54th minute. Cristiane had possession with space on the left side and sent a through ball to Rapinoe who was a tad slow getting to the ball, and Barnhart slid in to snatch the ball.

And with the Red Stars fighting to stay alive in the playoff race, they pulled even with the league leaders.

Formiga controlled the ball in the midfield and fed Marian Dalmy on the right side. With Marta in hot pursuit of the ball, Dalmy sent a low cross that Masar ran onto and put home her second of the match in the 61st minute.

The Gold Pride was not content to simply play for a draw on the road, however. Minutes later, Christine Sinclair dribbled around Loyden in the box and had an open net, but Lydia Vandenbergh raced back and deflected Sinclair's shot out.

Sinclair was again one on one with Loyden in the 76th minute, running onto a Becky Edwards through ball in the box. Sinclair waited for Loyden to tip her hand, but it never happened, and she took a shot that Loyden punched out.

Two minutes later, Red Stars defender Natalie Spilger was whistled for a hand ball in her box. Marta stepped up and scored with ease, giving the Pride a 3-2 lead in the 79th minute.

“It was great to be able to contribute and help our team earn the win today,” said Marta. “We have not scored in while, so scoring two goals was very nice. We really needed this win.”

Masar nearly netted her third goal, and another equalizer, in the 87th minute for Chicago. However, after Masar ran onto a chipped ball into the box and flicked it toward goal, Barnhart, a U.S. national team keeper, dove to punch the ball off the line.

That was the last chance of the day for Chicago, who is now all but eliminated from WPS playoff contention. The final whistle was greeted with joy by the visitors, however, who celebrated their regular season title on the green grass of Toyota Park.