José and Pep to dominate in "Exhibition League"

Share All sharing options for: José and Pep to dominate in "Exhibition League" 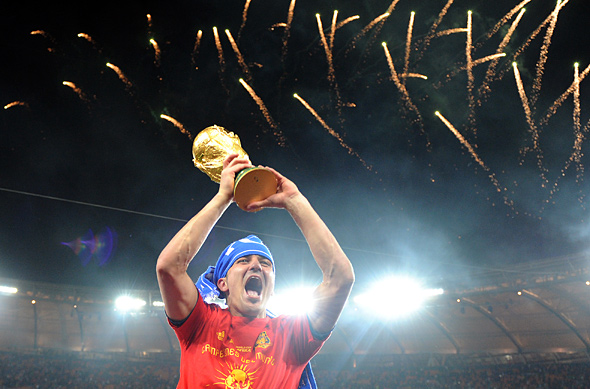 Barca boss Pep Guardiola has added Spain star David Villa to the roster at Barcelona, but new Real Madrid manager José Mourinho has made six major signings at Real Madrid. Which side will come out on top in La Liga? Photo: Chris Brunskill, isiphotos.com.

(We'd like to welcome Andy May to Center Line Soccer. Andy is a journalist based in Madrid and will keep an eye on La Liga for us, as well as other European leagues that catch his eye. Today, he gives us a preview of the new season in Spain, which gets underway this weekend. — Editor)

Last season in La Liga, Barcelona and Real Madrid bagged an incredible 195 points between them, out of a possible 228. You can see why some people claim Spain's top division is an "exhibition league," a league which will only be won by the country's top two teams. The upcoming 2010/2011 season will be all about which side — Real or Barca — drops the fewest number of points.

Both El Clasico giants have bolstered their squads over the summer; Pep Guardiola has brought in Brazilian defender Adriano and Spain's World Cup star David Villa, while José Mourinho has made six summer signings. Among the new players at the Santiago Bernabeu: German midfielder Sami Khedira, wingers Pedro Leon and Angel di Maria and Ricardo Carvalho, who worked with the Special One at Chelsea and Porto.

It is hard to see where Real and Barca's competition will come from over the next nine months. Valencia, who finished third and 18 points adrift of Real last season, have sold their two best players. With Villa now at the Nou Camp, David Silva is a Manchester City player.

Sevilla look most likely to challenge for a place in the top two. Manola Preciado has done well to keep hold of his top striker Luis Fabiano this summer and only last week, Los Rojiblancos beat Barcelona 3-1 in the Spanish Super Cup — Fabiano got Sevilla's first goal.

After reigning champions Barcelona lost just one match in 09/10, it seems as though this season's title will be won or lost in April and November — El Clasico time!

While Mourinho is at a new team and wants to be judged on his second season at the Bernabeu, Real certainly have the quality to regain the La Liga title. Cristiano Ronaldo has looked sharp in pre-season, World Cup star Higuain is still scoring goals and Iker Casillas was magnificent the other night at Bayern Munich.

But on paper, Barcelona are the reason why Casillas and co. won the World Cup in South Africa. Each of Spain's 8 goals were scored by Barca players! And we cannot forget about the best player in the world, Lionel Messi, who tucked away a very impressive 34 goals in the league alone in 09/10.

I think it is fair to say Guardiola has the best — and certainly most settled — starting eleven but José can call on a better squad. With Real and Barca fighting on three fronts this season, it is all about having a strong squad.