Remembering the reality of the NASL

Share All sharing options for: Remembering the reality of the NASL 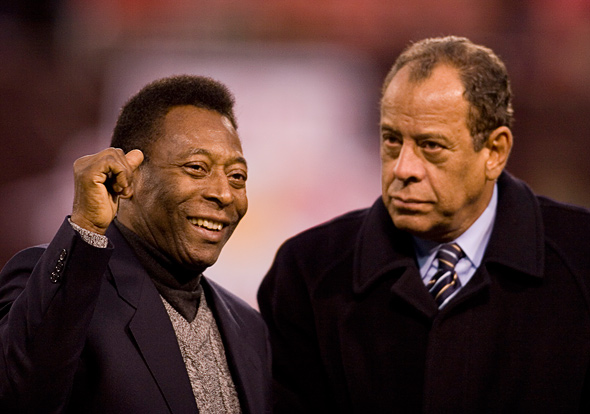 Despite the presence of players such as Pelé and Carlos Alberto, seen above at a 2006 Red Bulls pre-game ceremony, the NASL was not the high-water mark for American soccer, contends Center Line columnist Pete Ratajczak. Photo: Howard C. Smith, isiphotos.com

The rise of the Red Bulls from laughingstock to MLS' Most Glamorous Franchise has had soccer scribes from coast to coast comparing the current league, usually unfavorably, to the glory days of the NASL Cosmos. I’m here to tell you that nostalgia isn't what it used to be; there’s never been a better time to be a soccer fan in the U.S. than right now.

“Once in a Lifetime,” the film that chronicles the rise and fall of the Cosmos, is great fun, but doesn't give more than a cursory glance at the NASL outside of that one team. Let’s take a look at the Cosmos (and the NASL’s) best year, attendance-wise: 1980. The Cosmos drew over 42,000 a game at home and over 37,000 a game on the road that season, but even with those big crowds, the league-wide average attendance was just over 14,000. Eight teams drew less than 10,000 a game. Philadelphia and Atlanta’s announced attendance was under 5,000 a match.

As for the games, while there were some great players in the NASL, most of them were at the end of their playing careers. I remember the thrill of seeing Johan Cruyff playing for the Washington Diplomats in 1980, and there were some matches that were quite entertaining. But few teams had a Cruyff on their roster. There were many games that resembled a dreary midweek Colorado – New England matchup of today, with two major differences: back then, the fields were much worse, and there were very few American players involved.

NASL teams played in huge football stadiums, often on crappy artificial turf. If you get the “Once in a Lifetime” DVD, check out the bonus clips of the 1981 Soccer Bowl. The Cosmos play the Chicago Sting in Toronto, in a half-filled Exhibition Stadium, on what looks like the world’s largest pool table. Dreadful. The clips of Pelé’s last competitive game, winning the 1977 NASL title in Portland, shows an artificial turf field so scarred and patched it should have been condemned.

To try and boost the game here at home the NASL had a rule that each team had to field at least 3 North Americans, and many sides struggled to meet this requirement. Usually, that meant the goalie, a defender or two, and/or maybe a holding midfielder (usually described as “rugged,” or “hardworking,” never “skillful,”) would be American (i.e., native born, or a green card holder). Those were the days when the U.S. National Team was in the midst of a 40 year run of failing to qualify for the World Cup, when soccer fans were all waiting for the kids inspired by Pelé’s arrival in 1975 to grow up and take the American game to new heights.

Those kids, and the sport, have grown a great deal since then. The numbers don’t lie. A U.S. World Cup game played in the afternoon now draws the same TV ratings that a World Series game played in prime time does. (Back then, World Cup games weren’t even on English language television.) MLS’ expansion plans have been thoughtful and successful; Philadelphia had to cap their season ticket sales at 12,000, while Vancouver has sold 12,000 season tickets for next year’s expansion team (Portland has sold over 7,000). And the new financial requirements for ownership of D2 teams is great news for those of us looking towards the day when promotion and relegation is a part of the game here in the U.S. (though that is still a generation away).

And Red Bull Arena rocks. Imagine the Home Depot Center, but with a roof that’s functional instead of decorative, seats much closer to the action, and with a train stop within walking distance. Finally, a world class setting for the sport in the media capital of the world.

It might have been glamorous and exciting to be at a sold out playoff game in Giants Stadium back in 1979, hanging out with Henry Kissinger and Mick Jagger in the locker room after the game, but going to a Seattle Sounders – Chicago Sting playoff game in 1981, with less than 10,000 people rattling around the old Comiskey Park, was a different experience.

Yes, soccer still has a long way to go in the U.S. to be seen as “major league.” While our National Team can claim to be a dominant force in the region, we’re still thrilled to beat a “powerhouse” like Algeria, and based on CONCACAF Champions League (and/or Champions Cup) results, MLS lags behind Mexico and even Costa Rica when it comes to the strength of our domestic league.

But when I hear anyone get all misty over those “good old days” of the NASL, I know they’re either delusional, or simply miss being young, and discovering a brand new sport.

For soccer fans in the U.S., the sport is stronger, our players better, and the future brighter than ever before.