Barca already ahead in title race after Santander win

Share All sharing options for: Barca already ahead in title race after Santander win 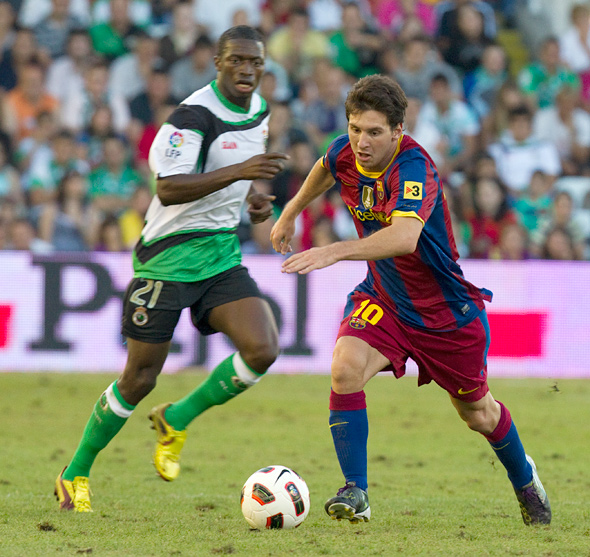 After scoring a sensational 34 goals in La Liga last season, it took Lionel Messi just three minutes to get off the mark this time around. The little Argentine — along with World Cup winners Andres Iniesta and David Villa — hit the back of the net in Barcelona's 3-0 win away to Racing Santander. Meanwhile, Real Madrid could only draw 0-0 at Real Mallorca in Jose Mourinho's first competitive match in charge of the whites.

Barca were dominant in the north of Spain and could have easily scored more than three goals at Racing; before his strike, Villa had an effort disallowed on his debut.

Racing's former attacker Sergio Canales was entrusted with the Real play-maker role but the youngster was largely ineffective on the island of Mallorca. Mourinho's men struggled to get going and his two main out-and-out strikers, Gonzalo Higuain and Karim Benzema, both squandered good chances inside their opponents box.

A season is never decided on the opening day but already Barcelona are two points in front of their arch rivals. Last season, the title was decided by just three points.

In all fairness to him, Jose Mourinho has admitted that his Real side are far from their best and he has asked supporters to give him time and judge him on his second season in charge at the Santiago Bernabeu. And he will get time - it took him two years to win the Champions League at Inter Milan and Mourinho is definitely the right man to deliver the impressive tenth European Cup that Madrid and their President Florentino Perez crave.

One amazing but unsurprising move this week in Spain, has seen Zlatan Ibrahimovic leave the Nou Camp and return to the San Siro in Italy. After just one year at Barcelona, the former Inter striker has joined AC Milan on loan in a deal which could become permanent at the end of the season. Considering he cost Barca well over €50 million just over a year ago, this is the latest crazy transfer in the beautiful game.

I think it would have been wise for Pep Guardiola to persist with the Swede, who did actually score an average of one goal every two games last season. With little Lionel in the team this is not a bad record at all!

Elsewhere in Spain's top division, Sevilla and Valencia both recorded victories at the weekend and Deportivo were held to a goalless draw by Real Zaragoza.

There are still a few days to go until the transfer window closes, so it would be unwise to rule out another big signing or departure in the crazy world of La Liga.