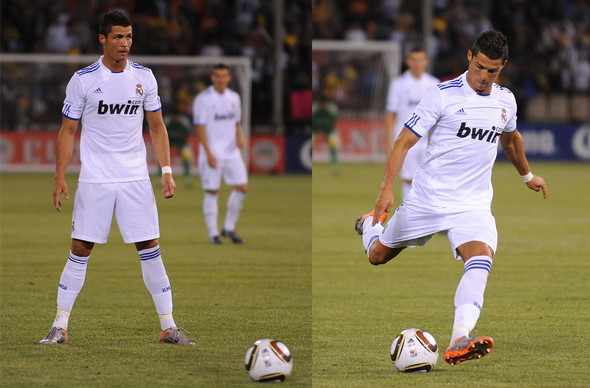 Center Line Soccer's complete coverage includes a photo gallery and video of the post-game press conference (part 1 and part 2—note that it is almost entirely in Spanish, although the first question in part 2 is in English).

(San Francisco) The atmosphere was festive at Candlestick Park with support mixed for both opponents in an entertaining international friendly between Real Madrid and Club America. In the end the appreciative crowd gave a standing ovation to both sides as the Spanish giants prevailed 3-2.

A first half goal from Real Madrid's Sergio Canales was answered by two second half strikes from Club America's Enrique Esqueda and Vicente Sanchez. Not willing to settle for losing their first friendly of the preseason, Real Madrid struck back through goals from Gonzalo Higuain and Cristiano Ronaldo to secure the victory. The Ronaldo goal in the 82nd minute came off a beautifully taken free kick that has become the signature finish for the Portuguese international.

For Club America, the discouraging result was tempered by the fact that goalkeeper Guillermo Ochoa and the rest of the defense comported themselves fairly well against a potent and creative Real Madrid attacking threat throughout the first half, before pushing forward in the second half to take a surprising 2-1 lead. Losing on the Ronaldo free kick late in the game had to hurt, but in no way did the Mexican Club disappoint with their effort.

While missing many of the promised star attractions for Real Madrid -- Kaka, Iker Casillas, Xabi Alonso, and Sergio Ramos -- fan favorites Pepe, Gonzalo Higuain, and Cristiano Ronaldo did make the midweek trip to San Francisco to participate in their first preseason friendly of the summer. The match also marked the debut of new Real Madrid head coach Jose Mourinho, who was victorious in his first match with the famed Spanish club.

After a tentative start to the match, the first significant Ronaldo sighting of the evening came in the eighth minute, as the Real Madrid talisman attempted an audacious shot from well outside the penalty area that forced America goalkeeper Memo Ochoa into awkward chest-save. Blame the Jabulani? The often maligned official World Cup ball certainly seemed to play into the swerving shot.

Real Madrid continued to control the run of play as the game wore on. In the 17th minute a wonderful give-and-go on the right wing between Pedro Leon and Canales resulted in a through ball to the top of the area that found forward Karim Benzema in stride. His blistering shot was deflected away from danger by a nice kick save by Memo.

Club America had little time to catch their breathe as Madrid was on the push again a minute later. A nice ball delivered to Benzema to the left of goal was expertly pushed toward the byline. With space running out, he sent a low shot toward goal that forced Memo into another fine save. With 20 minutes elapsed in the match, it was clear that Real Madrid was the better team.

Resorting to speed attacks through the center of the field Club America finally found some space to carry the ball into the attacking third, as Daniel Montenegro carried the ball straight down route one. However, the hulking defender Pepe stepped up to greet him near the top of the area, and stopped him in his tracks. Montenegro crumpled to the ground, but no foul call was forthcoming from referee Jair Marrufo. A yellow card was brandished to a Club America teammate for dissent, but he wouldn't have been surprised by the non-call if he more closely followed MLS.

By the 30th minute it was clear that Real Madrid was in control of the game. While not exactly looking fluid in their passing, Madrid dominated possession in the attacking third as they searched out space to challenge Memo. Ronaldo especially, given free reign in the center of the Madrid attack, anxiously prodded the defense for any passing or shooting lanes. And then things got interesting.

Off a corner kick in the 32nd minute, Benzema finally found an opening as he leaped high at the top of the six-yard box and smashed a header off the crossbar. Less than a minute later, Benzema had a second chance to score as he was on the receiving end of a beautiful cross at the far post courtesy of Pedro Leon. Instead of burying the header, he somehow conspired to slip over and the ball harmlessly deflected off of him for a goal kick.

Real Madrid would not have to wait much longer to find the back of the net as a beautiful sequence of passes in the 34th minute led to the opening goal of the game. Finding the ball at the top of the area, Ronaldo deftly touched the ball forward to a full-speed Benzema converging on the left post. Instead of taking the shot, he one-touched the ball back across the six-yard box to an unmarked Canales, who calmly slotted the ball into the net for the 1-0 lead.

Instead of seizing the momentum from the goal, Real Madrid slowed things down over the rest of the first half. Apparently already in midseason Jose Mourinho form, the team played as if they would be content to leave Candlestick with a 1-0 victory. The only danger to that scoreline was a 45th minute header from Ronaldo that forced Memo into a comfortable diving catch save.

Following a somewhat disjointed first half, the second half started much more sharply, as Club America began to even the possession disparity with Real Madrid. The action also spread from end to end, as both teams used their speed to run the ball directly at goal. Fresh legs for the Mexico City club in the midfield came via Miguel Layun and Antonio Lopez, and they quickly forced Real Madrid to better settle their back four.

In the 53rd minute, Club America found just reward for their efforts with a spectacular effort to even the score. A long ball from the left side from defender Adolfo Rosinei was met in stride by Esqueda just inside the penalty area. Without taking a touch, he rifled the ball low and to the far post to beat goalkeeper Jerzy Dudek and restore parity to the scoreboard.

Surprisingly, the Ronaldo led Real Madrid attack continued to fizzle and Club America seemed to tip the game in their favor. Capitalizing on a defensive miscue, assist man Rosinei notched his second of the night with an intercepted pass and go to Vicente Sanchez. The young forward took a nice touch and settled the ball at the far post for the shock 2-1 lead in the 61st minute.

Perhaps trailing in the contest was the catalyst Real Madrid needed to step up their game in the second half. Pressuring the Club America defense from the restart, Ronaldo and company did not take long to find the equalizer. In the 63rd minute, second half substitute Angel Di Maria found space at the top of the area to feed Ronaldo. He immediately sent a well-weighted diagonal ball through the area to the feet of substitute Gonzalo Higuain. The Argentine World Cup goal scoring standout continued his prolific ways by blasting the ball past the substitute Club America goalkeeper Armando Navarrete.

The same combination for Real Madrid nearly restored the lead in the 70th minute as some clever footwork from Ronaldo found him with plenty of space to lay the ball off to Higuain for the 18-yard shot from the top of the area. Unfortunately, the shot was somewhat scuffed and the ball was safely scooped up by the ‘keeper.

In the 73rd minute, a loud gasp from the crowd resulted from a dramatic volley attempt off a corner kick from Club America's Esqueda that soared over the crossbar. The shot was a good reminder that the Mexico City club was not done for the evening.

Real Madrid appeared to take the lead in the 80th minute when Ronaldo again connected with Higuain for a well taken goal into the roof of the net. Instead, with offside called on the play, the score remained tied.

In the 82nd minute, a foul committed by Club America at the top of their area set up Real Madrid with a free kick. To no one's surprise in the stadium, up stepped Ronaldo to take the 22-yard attempt from just right of the arc. With a trademark sigh and shoulders dropped, Ronaldo stepped up to the ball and finally completed the expected end to his infamous Nike World Cup commercial. He "wrote the future" with a well-placed shot up and over the wall and past the helpless ‘keeper to give the Spanish club a 3-2 lead.

Both teams began to empty their bench in the 85th minute, included the departure of Ronaldo to a thunderous applause from the appreciative crowd. And after an uneventful five minutes, the final whistle blew to close out the match.