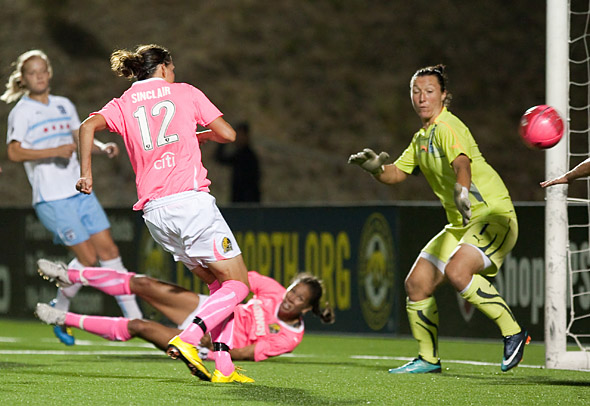 What appeared to be a late goal for Gold Pride's Christine Sinclair was called back for an alleged foul by Shannon Boxx. Photo: Kelley L. Cox, isiphotos.com

Two of the top defensive clubs in Women’s Professional Soccer battled to a hard-fought draw on Saturday night at Pioneer Stadium in Hayward.

FC Gold Pride, the league’s top defensive team, showed why it has allowed the fewest goals all season (14) when they shutout the Chicago Red Stars at home. However, all-star keeper Jillian Loyden of the Red Stars showed her caliber of play, shutting down the league’s best offense.

There were few chances on either side, with Loyden making the best save of the game — a diving stop on a Kelley O’Hara shot in the 41st minute — to keep the game scoreless.

Gold Pride’s Christine Sinclair also put home a goal that was called back when Shannon Boxx was whistled for a foul on a free kick late in the second half.

Ultimately, the game ended in the scoreless draw and FC Gold Pride (12-3-3, 39 points) became the first club to clinch a playoff spot. Chicago (5-8-6, 21 points) remains in a fourth-place tie, even with Sky Blue FC for the final playoff spot.

In the sixth minute, Candace Chapman sent a long ball into Marta toward the left flank. The Brazilian international turned and found Kelley O'Hara at the top of the box, where she fired a shot that Jillian Loyden batted down.

Chicago began to control possession after the Gold Pride came out with some momentum. Megan Rapinoe created the best chance for the Red Stars in the 23rd minute when she ducked her way into the box and sent a cross for Ella Masar. Gold Pride captain Rachel Buehler tracked down the ball, however, and headed it away to safety.

In a half with few opportunities by either side, Chicago's Karen Carney had what could be the semblance of a threat of a goal with a shot that went 10 feet wide of target.

Rapinoe had an open shooting lane from about 25 yards out. Her shot was headed wide, and Barnhart made easy work of it. Rapinoe tested Barnhart again, this time from 30 yards out in the 39th minute, but it wasn't a challenge for Barnhart.

Gold Pride had its first chance in nearly a half hour when O'Hara was robbed of a goal in the 41st minute. Tiffeny Milbrett beat her defender to the end line and sent a cross into the box that O'Hara headed for the lower 90. Loyden made a one-handed, diving save before grabbing it to keep the game scoreless.

It proved to be the last chance of the half, and the two sides went into the locker room even, 0-0.

Both teams got off to inauspicious starts to begin the second half, but the Gold Pride had a pair of chances within the first 10 minutes.

Marta collected a through ball in the 53rd minute and sent a cross to Christine Sinclair, but it was knocked out for a corner; Marta took the corner and Buehler nearly got behind the ball but it was just out of her reach.

After the Pride chances, the game opened up a bit. Cristiane got Chicago's first chance of the half in the 56th minute when she slipped behind the defense and fired a shot, but it was right at Barnhart.

Kandace Wilson got herself a yellow card in the 62nd minute, taking down Cristiane on the left side, just outside the box.

Casey Nogueira took the free kick, bending a ball into the goal mouth that crossed up Barnhart. The Pride keeper couldn't handle it, but Chapman was in the right place at the right time and sent it out of pressure.

Pride midfielder Shannon Boxx got in on the action in the 69th minute. Camille Abily left a pass for Boxx just outside the box which Boxx one-touched at goal. Loyden gobbled up the shot with ease.

A minute later, the Pride pressed forward with Wilson streaking down the right flank. She whipped a cross through the box that was just out of the reach of O'Hara on the back post.

Gold Pride scored an apparent goal in the 78th minute when Marta took a free kick from 35 yards out. Her bending ball was won by Boxx who headed it square to Sinclair who put it in, but was called back when the official blew a foul on the Pride.

Abily made one last effort at goal in the match, but her shot in the 90th minute was saved with ease by Loyden.

After one minute of stoppage time with no chances either the way, the final whistle blew with the sides deadlocked at zero.