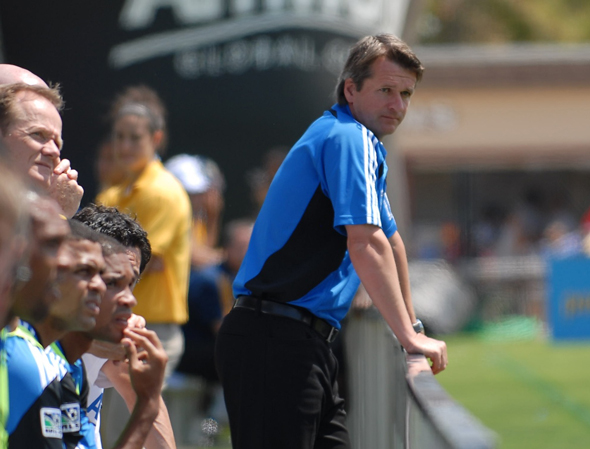 The many permutations possible for the Earthquakes starting XI for the match-up with FC Dallas on Saturday finally started to coalesce around a single line-up with the close of training on Friday afternoon. Getting themselves reacquainted with Buck Shaw pitch after a two week absence, the Quakes players separated themselves into the starters and reserves to work on match day tactics. If you have already listened to this week’s Center Line Soccer podcast, much of what follows extends from that conversation.

Midfielders Khari Stephenson — through injury — and Sam Cronin — through red-card suspension — will not be taking the field against the hoops, no matter the situation tomorrow evening. Instead, the center of the field will be manned by rookie Brad Ring, making his second start of the season, and Geovanni. The Brazilian being dropped to the attacking midfield role allows Chris Wondolowski and Cornell Glen the opportunity to pair up at the forward position. The wingers look to be Arturo Alvarez and Bobby Convey — the latter being a welcome inclusion into the offense again, where his delivering ability will be greatly wanted by Geovanni and the strikers. The back four remains intact from the Houston match, as Tim Ward has shaken off his ankle injury in time to make the start against the hoops.

The biggest move that I see in this line-up decision comes from asking Geovanni to play creator instead of finisher. While his hustle and passing ability lead directly to the first goal of the match against Houston, he did not show much more initiation of possession throughout the remainder of the match. And given the strength of potential MLS MVP David Ferreira and the rest of the Hoops midfield, Geovanni’s relaxed defensive style will not help the rookie Ring in shutting down their dangerous opponent. Still, the focus on returning Bobby Convey to the midfield has to be applauded, as his early season assists record went a long way toward earning San Jose goals and points. If the Quakes can continue their recent results of scoring early in matches, expect the formation to take on a much more decidedly defensive posture to run out the clock. In this case, Convey is well suited to that responsibility, and a potential substitution of Joey Gjertsen for Alaverz could do the same for the right side of the formation.

Besides Gjertsen, Bobby Burling looks to be the other bench candidate to see playing time against FC Dallas, with a third substitution by Ryan Johnson likely to spell either of the two starting strikers. Of course, all this is speculation on my part and will be determined by the game situations, but the pattern of substitution from previous matches is on record and likely to repeated.

Other notes from Buck Shaw include the absence of Scott Sealy as well as Stephenson. Neither player will make the 18, but Stephenson does target the midweek match against Philadelphia as his comeback game. Brazilian forward Eduardo continued to look sharp as he gets himself back to full fitness and Ramiro Corrales continued to increase his workouts as he gets his knee back to full strength. The erstwhile captain of the team is hoping to be back in time for the Chicago match later this month, but was careful to say that he would not accelerate his return to the field and risk further injuries. With the depth of the roster right now, Corrales certainly has the right attitude regarding the timeline of his return.

Jon Busch continues to hold down the goalkeeping role, with English International and guest of the team Richard Wright continuing to provide a counterpart in intrasquad scrimmages. In fact, the interplay between the two during shooting drills is a blast to observe. While the trash talking and banter is usually reserved for the strikers, Busch have Wright were getting into a game of one-upmanship when it came to making spectacular acrobatic saves. Both were impressive on numerous occasions, and I have no doubt that Wright has plenty left in the tank for any team smart enough to sign him. Perhaps if he stays unattached into the MLS offseason, he could be playing stateside come 2011.

I stuck around after the Earthquakes retreated to their lockerroom to witness the arrival of FC Dallas to Buck Shaw Stadium. They spent much of the first half of their training getting used to the field dimensions and the pitch conditions. It looks like Jeff Cunningham will be starting in their lone-forward formation, so here’s hoping he doesn’t extend his scoring record started last week against Toronto FC. The notoriously streaky scorer will be one to watch for the Hoops, as will their young wingers Brek Shea and Atiba Harris. Bog down the Dallas attack, and maybe Geovanni, et. al. can find space through a banged up center of defense. If so, the Quakes will be the first team to beat the Hoops in over 3 ½ months.