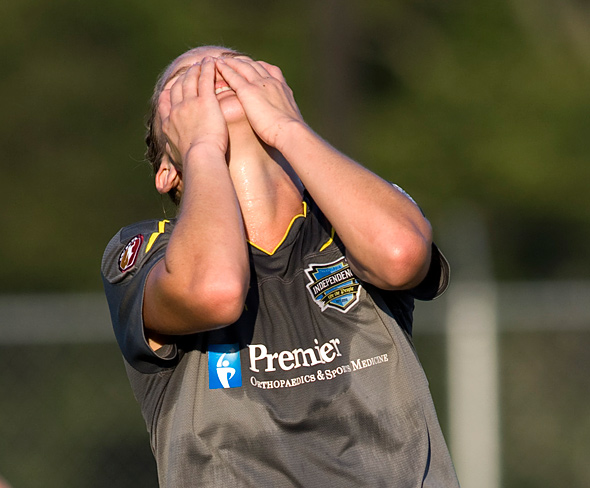 Philadelphia's leading scorer, Amy Rodriguez, has had a hard time finding the back of the net since winning Player of the Month honors in June. Photo: Brad Smith, isiphotos.com

Entering the final weekend of play in Women’s Professional Soccer’s second season, FC Gold Pride has everything locked up and is just looking to keep its solid play rolling into the playoffs. Their opponent, the expansion Philadelphia Independence, while they have locked up a home playoff game, are reeling and need to right things before the postseason.

Philadelphia (10-9-4, 34 points), who sits in third place, can still grab hold of second place in WPS — which would grant them home field in the WPS Super Semifinal — should they come away with a win and a loss or tie by the Boston Breakers.

It won’t be an easy task for Paul Riley’s club, who have lost three straight and are going up against a team in FC Gold Pride (15-3-5, 50 points) that has run away with the WPS regular season championship and has not lost in 13 matches, going 9-0-3 since its last defeat, June 27 vs. Sky Blue FC.

Pride midfielder Shannon Boxx is not likely to play, having picked up three yellow cards throughout the year. Another yellow and Boxx would be suspended for the club’s next match, which would be the WPS Championship on Sept. 26.

For the Independence, Amy Rodriguez is the number one threat in their attack. She has been kept off the scoreboard for some time since her June outburst that got her WPS player of the month honors.

Rodriguez leads her club in goals with 12, but hasn’t put one in the back of the net since Aug. 11 in a 2-1 win over the Chicago Red Stars. If the Independence hope to win their first in four matches, they’ll need Rodriguez to produce.

Meanwhile the Pride have a number of players who can score goals. Marta leads the team with 18, while Christine Sinclair has nine goals and nine assists.

Kickoff at Pioneer Stadium in Hayward is set for 5:30 p.m.