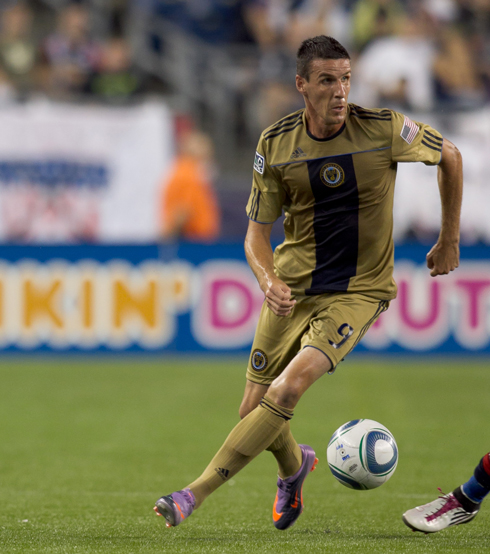 Welcome to the media round-up here at Center Line Soccer, as we look at all the stories surrounding the San Jose Earthquakes and their match tonight against the Philadelphia Union. The game starts at 7 p.m., so make sure to leave home early so you don’t get caught in rush-hour traffic. Plus, the first 3000 fans through the gates receive a draw string backpack courtesy of the National Hispanic University. Muy bueno!

Also, for you season ticket holders, tonight’s game marks the last chance to turn in unused tickets from prior games. In fact, bring an unscanned ticket and get two tickets to the match. Heck, if you weren’t planning on using them anyways, pass them out like Halloween candy to the fans outside the gates and really make their night. Maybe your good karma will help ensure the Quakes make it into the playoffs.

In our local newspaper, the San Jose Mercury News, Elliott Almond kicks things off with a player profile on midfielder Khari Stephenson. The lanky Jamaican hopes to take the field tonight as he continues to revive his career after a difficult stint abroad. The Quakes sure could use the playmaking skills of Stephenson, especially leading up to the attacking third. He sat out the weekend match against FC Dallas with the intent of healing up or the Philly match — let’s hope for the Quakes offense he is ready to go.

Looking at things from the Philadelphia perspective, the Union still harbors hopes of catching the Quakes in the race for the MLS Cup playoffs. After struggling to start the season, Phily has a spate of home games remaining, plus a nice nucleus of players that are rounding into form. Team MVP Sebastien Le Toux headlines the roster, while dynamic rookie forward, and the club’s leading scorer, Danny Mwanga hopes to make the 18 this evening after suffering a recent shoulder injury. Even former Quake Shea Salinas is back in the mix for the Union after recovering from a two month absence due to injury. Throw in recently acquired, and very effective, midfielder Justin Mapp, and the Union look ready to avenge the Quakes 2-1 stoppage time victory earned earlier this season in Chester, PA.

So, what to expect head-to-head? I’ll let Nick and Keith over at Goal.com handle those details. As I stated earlier this week on the CSRN Around the League podcast, I see the Quakes taking this one 2-0 behind a solid Buck Shaw defensive effort — it would be a fourth home shutout running — and goals created by playmaker Geovanni. Even though San Jose sports the lightest of schedules to end the 2010 regular season, the club can ill-afford to drop points at home to the league’s bottom feeders.

Turning our attention to some general Earthquakes news, a few tidbits are worth mentioning. First off, an apparent successful trial by English midfielder Luke Hammond has earned him a return invitation for preseason camp this January. With MLS contemplating the expansion of team rosters to 30 players in time for the 2011 season, Hammond showed enough to head coach Frank Yallop to be considered as part of the team’s future plans. Second, with the induction of former Earthquake Ronald Cerritos into the San Jose Earthquakes Hall of Fame coming during halftime of the Fire match on September 29th, the club’s all time leader in goals and assists is planning a meet-and-greet with fans the night before at a local eatery. Delicious pupusas and scintillating soccer talk at the same time? Sounds like a fun opportunity to me.

And lastly, the annual Soccer Silicon Valley Community Foundation banquet is scheduled for this Friday evening at History Park in San Jose. Don’t miss the chance to hob-nob with the Valley’s soccer movers and shakers while enjoying a keynote speech from former player and GM Johnny Moore. Also, the humanitarian awards for Earthquakes and FC Gold Pride players will be presented — tickets are still available for this event.