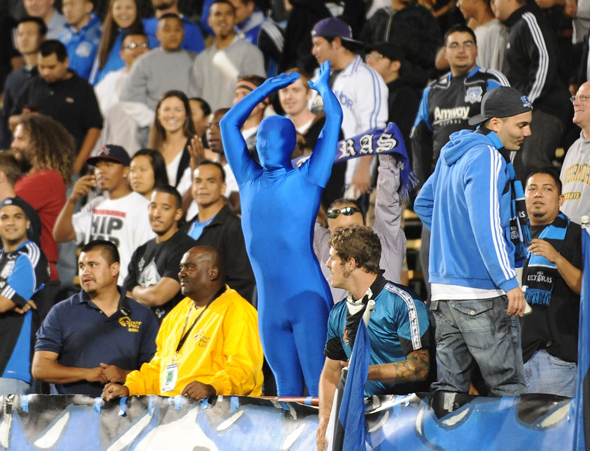 Why so blue? The San Jose Earthquakes are primed to make the MLS Cup playoffs after their 1-0 victory over the Philadelphia Union. Photo: Joe Nuxoll, centerlinesoccer.com

After earning the day off yesterday, the San Jose Earthquakes were back in action this morning with a light training session ahead of a weekend off from MLS play. With the Quakes next match still eight days away, coach Frank Yallop took the opportunity to give the players time to recover ahead of their upcoming road trip to Canada. With such a long break between games, injuries and fitness concerns can be answered and improved upon. Most notably, getting Khari Stephenson’s ankle back to 100% and giving Eduardo more training time to reach his full playing potential.

One of the take-home messages from Wednesday night’s 1-0 win over the Philadelphia Union was the need for the starting XI to get more time on the field together. With Cornell Glen looking more like a bench player as Eduardo clearly supersedes him as a target forward and Geovanni still not looking fully comfortable with his new teammates, an extended week of training ahead of their match with Toronto FC will certainly help elevate the flow and intensity of play that was lacking in Wednesday’s first half.

Goalkeeper Jon Busch continues his renaissance in San Jose after being unceremoniously dumped by the Chicago Fire, and he still leads in the fan-vote for player of the match against the Union. However, my choice in that match was Chris Wondolowski, and not just because he scored the only goal of the match — his sixth game-winning goal of the season. Wondo has now twice in two games been asked to play considerable time in the midfield, in an effort to let floating forward Geovanni more freedom to play wherever he pleases in the attacking half. Not always given credit for his defensive abilities, Wondo was constantly in the thick of things in the center of the field, making and winning numerous aerial challenges and 50/50 balls to thwart the opponents in possession. With the Earthquakes preferred strategy of building attack up the flanks, it is essential for the central midfielders to play clean-up in front of the defensive four. We know Sam Cronin — and Brad Ring against FC Dallas — is highly capable of that, but it was the work of Wondolowski that helped stave off potential opponent possession at the centerline. Coach Yallop will have some tough decisions to make in the coming weeks as his roster reaches its full health. Wondo versus Eduardo; Ramiro Corrales versus Tim Ward; Stephenson versus Wondo or Geovanni; Joey Gjertsen versus Arturo Alavarez. And add the need to fill the bench, the depth that Yallop and general manager John Doyle praised at the start of the regular season is proving to be the best kind of problem to have as the season draws to an end and the playoffs beckon.

Looking far ahead to next Saturday’s match in Toronto, I am most interested in seeing how the Reds react in their first meaningful match since the dismissal of head coach Preki this weekend in Houston. TFC certainly didn’t represent well against Real Salt Lake in the CONCACAF Champions League on Tuesday, but I reserve judgment on what I see the direction the club is heading in until after their match-up with the Dynamo. Both those clubs have a slim chance of making noise in the MLS playoff chase, and a draw will do neither any good in that regard. If TFC lay another egg of a performance, then the Earthquakes will be visiting Toronto at an ideal time to earn another three points on the road.

Returning to the Quakes, let’s go over a quick update on the injury situation over at Buck Shaw Stadium. The best news of the week had to be seeing the empty training room after the win against Philly. I poked my head in there after finishing gathering post-game interviews, and the only inhabitant was head trainer Bruce Morgan tidying up the physio tables. With only the requisite ice-bags to be administered all around, he had the easiest post game in his nearly three years with the current Earthquakes. As for the players still in recovery with a chance to see the field again this season, Corrales looked the farthest along, as he is targeting a return to action with the Chicago Fire match later this month. Scott Sealy appears to be on that same schedule, but he’ll need to ensure his nagging summer injuries are in the past. Rookie Ike Opara is back with the team, but still looks many weeks away from seeing regular season action. The team will not rush the defender back onto the training pitch, especially with Brandon McDonald and Jason Hernandez doing so well in the center of defense. As for the walking wounded that may have seen their last playing minutes of 2010, Andre Luiz is finally off crutches and wearing just a soft knee brace. The news for Joe Cannon is less positive, as he is still a week or so away from stowing the crutches away and putting full pressure on his surgically repaired foot.

Lastly, on this lazy Friday afternoon, I want to highlight some good reading around the internet as it pertains to the Earthquakes. Ridge Mahoney over at Soccer America pens a good review of the growing Brazilian contingency in the Quakes locker room. The Santa Rosa Press Democrat relates the philanthropy of the Earthquakes organization in coming to the aid of a boondoggled Healdsburg youth soccer league. And the Soccer Silicon Valley Community Foundation is gearing up for tonight’s sunset banquet in History Park, with special guest speaker Johnny Moore, and beer and wine included in the price of admission.

As always, please feel free to leave your comments and questions below. I enjoy getting your feedback, and take that with me on my trips to Earthquakes training. Have a great weekend everyone.