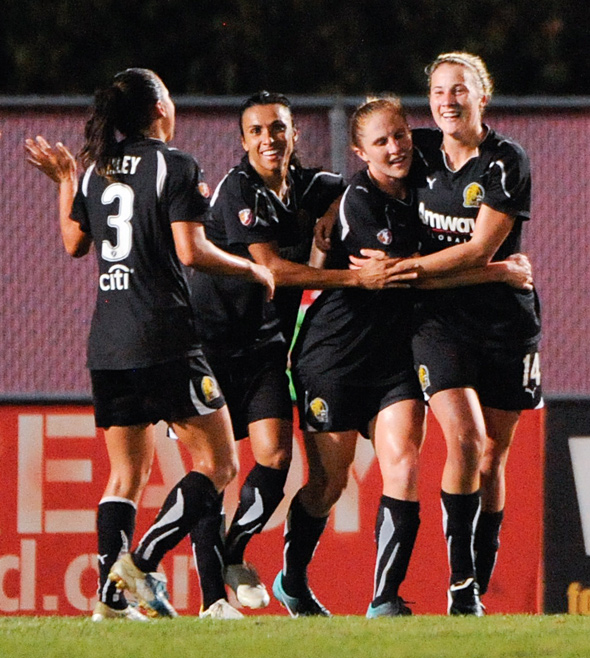 It was a slow beginning to the match, with neither team taking an edge. Gold Pride controlled more of the ball, but neither the league leaders nor defending champs had any chances.

Gold Pride controlled the possession early on despite the better chances of Sky Blue. But in the 21st minute, the Pride got its best opportunity.

Marta handled the ball before dropping it off to Camille Abily. Abily ripped a shot but it went just over the bar.

Kacey White threatened the Gold Pride goal in the 29th minute, collecting a Kai pass, faking out Kandace Wilson before ripping a shot for the far post; Barnhart had great positioning and snagged it.

In one of the last chances of the first half, Marta showed her creativity, dribbling around a couple defenders before unloading a shot just outside the box. It was out of the reach of Burke, but wide.

Marta had a couple more chances to break the deadlock, but shots in the 44th and 45th minutes went for not.

Sky Blue FC came out gunning for a goal. In the 48th minute, Kai dribbled through a couple defenders and took a shot wide of Barnhart's net.

Marta continued her constant pressure on the Sky Blue goal. In the 50th minute, Kelley O'Hara fed Marta, who played a one-two at the top of the box with Christine Sinclair. Upon receiving the pass back from Sinclair, Marta ripped a shot just high of the net.

For Sky Blue, it was Kai who put pressure on the opposition's goal. In the 53rd minute, she was free behind the defense and before taking her shot, stumbled and missed.

In the ensuing rush, Sinclair got behind the Sky Blue defense and dribbled around Burke. After getting around the keeper, she couldn't position herself to shoot; she was blocked when she finally unloaded.

After a long stretch with not much activity, Kai’s persistence paid off in the 72nd minute for Sky Blue FC. After being called offside a number of times, she finally figured out the trap, beat it, and shot one past Barnhart for the 1-0 lead.

But after 18 minutes of possession soccer, with Sky Blue needing the three points, the Pride dashed those chances and got the equalizer in extra time. Abily sent in a ball and Edwards was on the receiving end to get the goal just prior to the final whistle.