Gold Pride have turned it around in 2010

Share All sharing options for: Gold Pride have turned it around in 2010 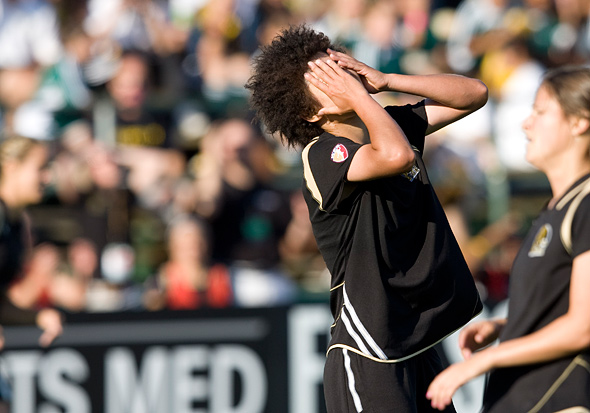 Frustrating scenes like this miss by Eriko Arakawa were common for FC Gold Pride in 2009. This year, things couldn't be more different as they head into the WPS Championship match on Sunday. Photo: Michael Pimentel, isiphotos.com

What a difference from one season to the next! A year ago, FC Gold Pride finished off Women's Professional Soccer's inaugural season with a league-low 18 points thanks to its 4-10-6 record.

"Players on the team from last year have that mentality that we can only go forward from here," said Gold Pride defender Kandace Wilson.

And in 2010, things have gone forward. In fact, it has been a complete 180 from a season ago. Gold Pride finished up the second WPS campaign with a league-best 53 points, a 16-3-5 record and home-field advantage in the WPS Championship - Sunday, Sept. 26, 11:30 a.m. at Pioneer Stadium in Hayward against the expansion Philadelphia Independence (who beat Washington and Boston, both in extra time, to get to the final).

"I was a lot more confident than I was last year," said Pride coach Albertin Montoya. "It was a learning process and it wasn't until the end of last season when I decided to be myself and coach the way I think I can coach."

Along with its incredible record and point total, the Pride also set a number of records - both individually and as a team.

"Last year we had a lot of inexperience, not a lot of chemistry and not a lot of players complementing each other on the field," said Pride veteran Tiffeny Milbrett.

Gold Pride added Marta, Camille Abily and Shannon Boxx from last year's top WPS team, the Los Angeles Sol, which folded after the 2009 season. In addition they've added three star rookies in Ali Riley, Becky Edwards and all star Kelley O'Hara that have been regular starters all year long. Christine Sinclair, who was on the 2009 club, meshed well with the new players and scored 10 goals along with nine assists (last year, Sinclair had six goals and one assist). Another key addition was Candace Chapman from the Boston Breakers, who has been rock solid in the central defense.

"We have the right combination of players (this year)," said Milbrett.

On the defensive end of the field, Gold Pride endured a tough season in 2009, allowing 28 goals, which was second from the bottom in WPS, in 20 games. In addition to the 28 goals allowed, the Pride had the worst goal differential with a minus-11.

Led by captain Rachel Buehler, who has captained the Pride in both its seasons, the Pride defense, along with Rookie of the Year Riley, Chapman, Wilson (who returned this year from a season-ending injury she suffered early last year) and Goalkeeper of the Year Nicole Barnhart, the Pride turned it around this year, allowing a league-best 19 goals in an extended 24-game season.

"Although we didn't have a great record, I think we did play some good soccer (in 2009)," said Buehler. "We really learned from our experience last year, prepared a little bit differently than we did last year."

But beyond the stats, the one thing that seems to be top on the players mind as to what made such a difference from one year to the next was team cohesion.

"We have really great chemistry this year," Buehler said. "I say that's really the number one thing… the chemistry has really taken us far."

"Team chemistry is something we could have done a much better job of last year," said Montoya. "This year, we've been able to spend time and make sure this team comes together. I believe that goes a long way into having success on the field."

Montoya, Buehler and the entire Gold Pride club will hope to add to that success for one more game in the championship on Sunday.