There's a title drought for the Bay Area — except for soccer

Share All sharing options for: There's a title drought for the Bay Area — except for soccer 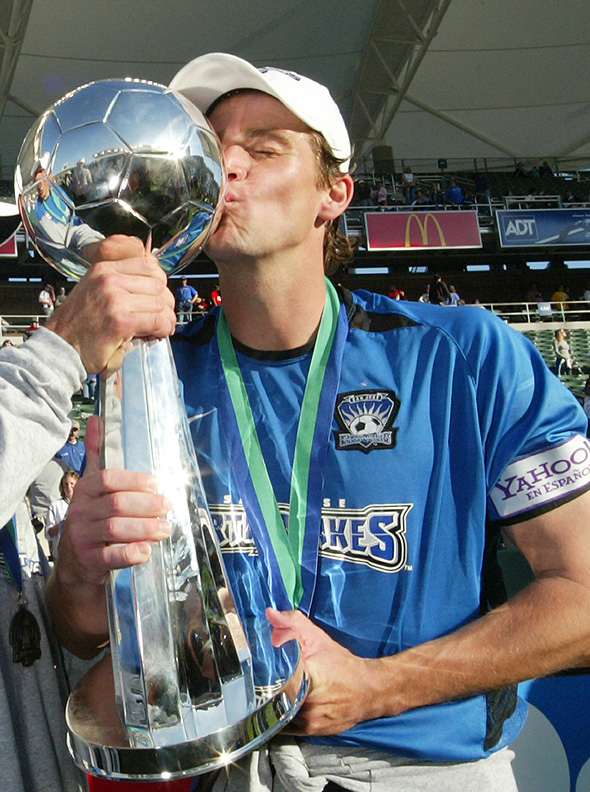 If it wasn't for soccer, Bay Area sports fans might not remember what winning championships is like. Here's Ronnie Ekelund kissing the cup after San Jose's 2003 MLS Cup win over Chicago. Photo: John Todd, isiphotos.com

It has been a while by local standards, but the Bay Area has another professional sports champion as of Sunday afternoon.

FC Gold Pride of Women’s Professional Soccer hosted the Philadelphia Independence at Pioneer Stadium in Hayward, on the campus of Cal State University-East Bay, and dominated, running away with a 4-0 win in the WPS Championship.

Thank goodness for Bay Area’s soccer clubs, otherwise the die-hard fans from San Jose, Oakland, San Francisco and everywhere in between would be sitting on a 16-year title drought — dating all the way back to the Super Bowl XXIX champion San Francisco 49ers.

And before those Quakes went to Houston, they, even without Donovan, left a nice parting gift — the 2005 Supporters’ Shield as best team in the MLS regular season.

Those teams were dominant, but this Gold Pride team could make a case as being the most dominant pro sports team in the Bay Area of all time. Finishing with a 17-3-5 record, the Pride led WPS with goals (50, including Sunday, 10 more than anyone else), goals against (19, eight fewer than anyone else) and goal differential (27, 20 better than anyone).

And the Pride ended its season with a 14-game unbeaten streak, having not lose since June 27, while blowing away the competition. They bested the second-place WPS club, Boston Breakers, by 17 points in the standings.

Without question, it’s been a dominating season for the Pride. It wasn’t possible for it to get better. But on Sunday, according to Gold Pride and Canadian national striker Christine Sinclair, it did.

“For 90 minutes, it was the best game we played all year,” said Sinclair, who netted a pair of goals in the win.

This championship experience used to be one of common occurrence in the Bay Area. It has become a distant memory. Until Sunday, the previous time there was a championship contest in this area was Game 5 of the 2002 World Series when the San Francisco Giants hosted the Anaheim Angels. And the last time Bay Area sports fans were able to watch a championship winning performance, it was the opposition, Cincinnati Reds, besting the Oakland A’s in the 1990 World Series.

Perhaps this Gold Pride victory will infuse that winning tradition back in the Bay Area — teams on the brink of breaking through, the new San Jose Earthquakes of Major League Soccer, as well as the Giants in Major League Baseball, could ride that local momentum in their respective playoff runs.