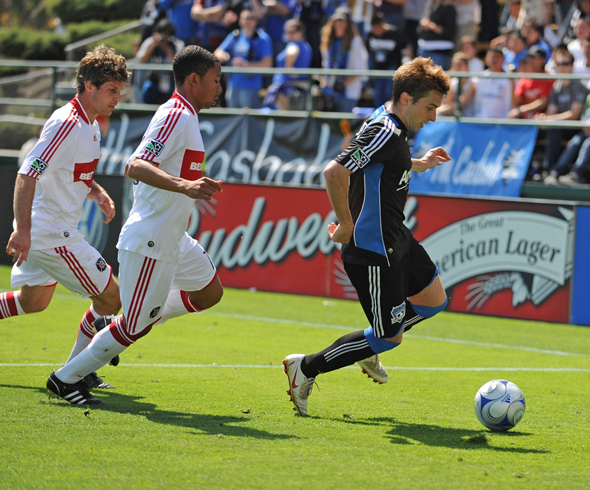 As the late September heat wave continued to bake the South Bay on Tuesday, the intrepid reporters from Center Line Soccer hosted the annual CLS Supporters Card training day extravaganza at Buck Shaw Stadium. Settling in the west grandstand to observe the San Jose Earthquakes on field preparations for Wednesday’s match against the Chicago Fire, the chatter was mainly about how confident this edition of the Quakes looks in practice as compared to years past.

Coach Frank Yallop and assistant coach Mark Watson ran their charges through a series of passing drills before splitting the team up for a full 11 v. 11 scrimmage. Making a return to full training was erstwhile captain Ramiro Corrales, as he anchored the B-side at left back, and Eduardo up top. The latter was unfortunately unable to make the trip to Toronto for last weekend’s match, but he was in full strength Tuesday ahead of the match against the Fire. Ryan Johnson continued to see duty atop the A-side formation and displayed a fine finishing touch throughout the scrimmage. And even more encouraging was seeing some of the same fine passing from RJ that was witnessed against TFC — a game where he should have earned three assists — as a valuable complement to his goal scoring display.

Jon Busch looked sharp between the sticks for the Quakes, as he prepares to face the team that dumped him just prior to the start of the season. While Busch is hesitant to comment specifically on the incident, it is clear that what matters most to him is seeing his new club be successful. With a 4-1-1 record with Busch in goal over the past six games, and the team just one point shy of the proverbial 40 point threshold for playoff qualification, the ‘keeper can be excused for not dwelling on the match against Chicago. Instead, it was all about keeping himself and his back four stationed properly in fending off the B-side during the scrimmage.

So what were the make-ups of the two sides? To save space — the A-side was the same starting XI that took the field against TFC, and the B-side was made up of the other healthy Quakes. Of those, Arturo Alvarez was the most active, as he carried several possessions into the area. Doing what he does best, Arty unleashed a left-footed blast that required a fine acrobatic save from Busch. Scott Sealy also presented well against the starters, as he appears fully returned to fitness following a difficult summer of injuries.

Finally, as a personal observation, I am impressed with the work ethic of the team this season as compared to the last two. By that, I refer to the training sessions in these latter weeks of the season, when in 2010 the team has everything to play for, while in ’08 and ’09 that was not always the case. The cliché that winning cures everything can apply for these Earthquakes, but it looks to be more than that. More and more I am seeing the guys anticipating the play rather than just reacting to the play in the scrimmages. This goes for both offense and defense, which then elevates the quality and intensity of the play to near-match levels. And instead of that intensity resulting in contentious confrontations between players, I am seeing common goal competition in its place. Yes, the B-side players need to show well to make an impression on the coaching staff, but they are not trying to do so at the expense of A-siders. This cohesiveness will serve the team well as they march toward their inevitable playoff qualification and the MLS Cup chase in the post-season.

Just a reminder, tomorrow’s match against Chicago starts at 8 p.m. The weather should be perfect for the players and the fans, so we encourage you to be there.