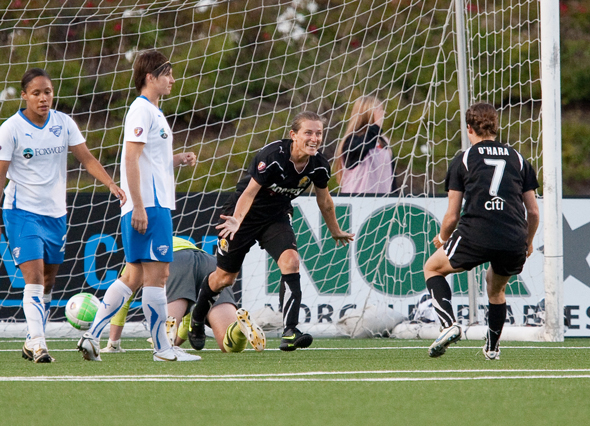 After playing to a scoreless first half, goals by Marta -- a league-leading 18th for the season -- and Tiffeny Milbrett catapulted the league's best offense to the two-goal lead it would not let up. Goalkeeper Nicole Barnhart and a resilient defense did the rest, shutting down the surging Breakers, and collecting a clean sheet.

For many WPS observers, the Breakers and the Pride are proving to be the two best teams in the league and are likely to meet up again in the championship match scheduled for September 26th. If that match-up does prove to materialize, it was clear from Sunday night’s action that the Pride would be considered to overwhelming favorites to lift the WPS trophy.

Read on to see how the game broke down:

Kelly Smith took the first shot of the game for either side, taking a shot from the top of the 18. Her shot, however, was deflected and scooped up easily by Nicole Barnhart in the sixth minute.

Two minutes later, the Pride, who controlled the majority of the possession in the early going, got its first shot. Kelley O'Hara jumped on a loose ball and took a rip from 20 yards out that just whistled wide of Alyssa Naeher's goal.

Gold Pride continued to apply the pressure and in the 16th minute, appeared to get the game's first tally. O'Hara fed the ball to Marta's feet inside the box, where she drilled it into the side netting. The goal was called back, however, when the Brazilian national was whistled for offside.

Boston was able to escape the opening pressure of Gold Pride and began to mount some semblance of possession. Smith began to control the middle of the field and in the 24th minute, set up Lauren Cheney. Cheney slipped in behind the defense and was one on one with Barnhart but was called for offsides before able to rifle a shot.

And in the 26th minute, the Breakers got their best chance of the match. Jordan Angeli fed Cheney the ball into Cheney at the top of the goal mouth. She was able to turn toward the end line and blasted a shot that Barnhart blocked. Kristen Graczyk cleared the ball away from danger.

Continuing to press the Pride's goal, former Gold Pride intern Jordan Angeli won a header off a Kristine Lilly corner kick in the 31st minute, but it sailed over the Pride goal.

Gold Pride got its first opportunity in 20 minutes when Marta streaked down the left flank in the 36th minute. She found Christine Sinclair in the center of the pitch, who slid a pass to O'Hara. O'Hara took a touch and fired one that went over the net.

O'Hara continued to add to her strong outing in the 39th minute. Marta sent a long through ball into the rookie all-star's feet, splitting Breakers defenders Ifeoma Dieke and Amy LePeilbet. O'Hara got into the box and took a shot that Naeher pushed away from the goal.

Boston made its way up the field in the 42nd minute and had a golden opportunity that they didn't convert. Cheney beat the Pride's offside trap and was deep in the box when she sent a cross to Lindsay Tarpley. Tarpley, with time and space, took a shot for the far post but missed the target by 10 yards.

Sinclair got behind the Breakers defense in the Pride's next run up the pitch in the 44th minute. Becky Edwards sent a lofted ball to the far post that Sinclair ran onto and first-timed a shot high and out for a goal kick.

Boston's rookie keeper Naeher showed why she is one of the league's best when she made an incredible stop on a Sinclair header in stoppage time. Sinclair received a cross and headed a lofted ball that was dipping just under the crossbar. Naeher leaped and was able to punch it off the ball and out.

It was the half's last chance, and both teams retreated to their locker rooms scoreless.

After not being able to convert any opportunities in the first 45, it didn't take long for the WPS regular season champs to tally the first goal of the match.

In the 47th minute, Rachel Buehler played a ball into Sinclair's feet on the left flank. Sinclair beat her defender before sending a low ball across the box that Marta ran onto and shot it into the goal past Naeher for the 1-0 lead.

Three minutes later, the Pride's eldest player, Tiffeny Milbrett put the Pride up 2-nil. Milbrett and O'Hara teamed up for a great one-two. O'Hara's ball into Milbrett split the Boston defense, with Milbrett connecting on a shot that hit the upper-90, virtually unsaveable for Naeher.

Sinclair got behind the Breakers defense in the 61st minute. But in her one on one opportunity against Naeher, Sinclair blasted it off the keeper, keeping the score at 2-0.

Gold Pride's second-leading scorer Sinclair continued her set up ways in the 63rd minute hooking up with O'Hara, but after settling the ball, O'Hara's shot was stopped by Naeher.

With all the offensive fireworks, Gold Pride's defense showed why it's the best in WPS. Boston penetrated into the Pride's 18, but the defensive line of Buehler, Kristen Graczyk, Ali Riley and Kandace Wilson swarmed to stop shots by Smith and Cheney in the 64th minute.

Marta nearly put the Pride up 3-nil in the 72nd minute. First, the four-time FIFA Women's World Player of the Year beat Naeher and had an open net to work with. Luckily for Boston, its all-star defender LePeilbet tracked back and blocked Marta's shot out for a corner that went for not.

O'Hara got the next opportunity for the Pride in the 76th minute, taking the ball, back to goal, at the top of the box. In one motion, she whipped around and fired a shot that just missed the lower 90.

Even with its commanding lead, the Pride still pressured the Breakers for a third goal. Shannon Boxx nearly got that goal in the 85th minute, firing a low liner that Naeher dove to stop.

Boston's first chance of the second half came in the 87th minute when Alex Scott beat the defensive trap, but Barnhart came off her line to make a diving stop. The Pride defense did the rest, stopping Boston's efforts.

It proved to be Boston's final chance as FC Gold Pride came out victorious.