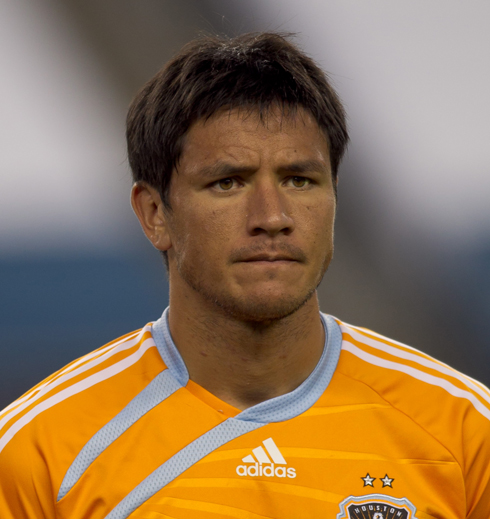 Brian Ching, hampered with a calf-strain injury, could do little to stop the San Jose Earthquakes from gaining a 2-1 result Sunday evening and earning their first ever victory in Houston. Photo: Andrew Katsampes, isiphotos.com

There is nothing like a three-day weekend to recharge the batteries and also get those little projects finished that a regular weekend does not have time for (hello, clean garage!) Throw in a pair of excellent results for the Bay Area soccer clubs, and prepping the kabobs for a Labor Day bar-b-que feels that much better.

Let’s start with the Earthquakes 2-1 victory at Robertson Stadium in Houston. As every story written on the match agrees, this was a night of firsts for the Quakes. First win for San Jose away to the Dynamo in three years of trying; first time the Quakes 2.0 have reached the 9 win mark; first MLS goal for attacking midfielder Khari Stephenson; and first straight red card for defensive midfielder Sam Cronin. Okay, maybe that last first is nothing to be excited about…

But the man who easily earns his first Man-of-the-Match honors for the Earthquakes was their designated player Geovanni. The ex-Hull City man notched his first MLS assist and first MLS goal in helping the Quakes leave the Dynamo languishing in the Western Conferences standings — and 9 points out of a playoff spot. Geovanni is still getting up to speed in his words, so look out MLS!

The flip-side to the good feelings from the Quakes victory is the uncertainty surrounding the injuries to Stephenson and Tim Ward. The former left the field for substitute Bobby Burling early in the second half after an awkward scissors tackle from the Dynamo’s Cam Weaver. The latter found himself falling off-balance late in the game, with the Quakes already playing a man down following Cronin’s ejection, and appearing to twist his ankle. Ward gamely continued to play as a disrupter in the midfield, even as it was painfully obvious that he could not effectively kick the ball.

The road result for San Jose was also important in the jockeying for playoff position as the final third of the season plays out. Now at 32 points with 9 games to play, the Quakes realistically can secure a place in the MLS Cup tournament with just 3 more victories. Why is that? Well, history has shown that 40 points is the threshold separating the qualifiers from the non-qualifiers in seasons past. Throw in a couple draws with the three wins, and the Quakes can start printing those first-round playoff game tickets. With a schedule that features 7 of 9 games with teams below them in the standings, playoff qualification should be considered inevitable.

Next up for the Earthquakes is a visit to Buck Shaw Stadium by the hottest team in MLS — FC Dallas. After a mediocre start to their season (0-1-4), the Hoops have climbed to a comfortable third place in the conference, and stand poised to challenge Real Salt Lake and Los Angeles for the top spot in the West. Dallas beat the Quakes 2-0 earlier this season in Frisco, Texas behind a brace from sensational young star Brek Shea. The Quakes will look to return the favor this Saturday night as they attempt to extend their home winning streak to 3 games.

Another bit of Earthquakes news comes out of England courtesy of the Daily Mail, where it was reported that former English International goalkeeper Richard Wright is on trial with San Jose and is poised to join the team. Given that the Quakes are working with just Jon Busch on the roster, and that the MLS pool ‘keeper cannot stay with the team indefinitely, it makes sense that John Doyle is looking to sign a second backstop. We’ll keep a lookout at Quakes training this week for Frank Yallop’s former Ipswich Town teammate, and let you know what we think. If he can be had for a decent price, it seems to make sense, but that may not be the best news for injured #1 Joe Cannon…

Finally, looking at other Earthquakes in action this past Sunday, forward Ryan Johnson scored the lone goal for his Jamaican National Team side in a 1-0 victory over Costa Rica. Johnson has found it difficult to find the back of the net while wearing the black-and-blue this year, but in green-and-yellow he notched his second goal of 2010. Up next for Johnson and Jamaica is a Tuesday night friendly with Peru.

Meanwhile, over in the East Bay, the FC Gold Pride continue to roll over the rest of their WPS competition. In beating the Boston Breakers 2-0 on Sunday evening, the Pride extended their league-best unbeaten streak to 12 games. Marta notched her 18th goal of the campaign, while Tiffeny Milbrett iced the result with her 6th of the season. Firing on all cylinders heading into the WPS championship game to be hosted by the Pride on September 26th, Albertin Montoya’s team showed why they must be considered the overwhelming favorites to lift the WPS championship trophy.

Due to the unusual format of the WPS playoffs, the Pride will face an opponent that has played just four days before, and perhaps participating in their third game in eight days. Breakers head coach Tony DiCicco firmly expressed his disappointment in the league’s playoff structure to yours truly after his squad lost to the Pride in what many feel was a preview of the championship match (complete audio of my interview follows the CLS match report). DiCicco took great exception to the notion his team may have to play so many more pressure-packed minutes ahead of the final with precious time off to get his players rested and ready. Don’t get too bent out of shape Tony; remember how well all that rest did for the Los Angeles Sol last year.