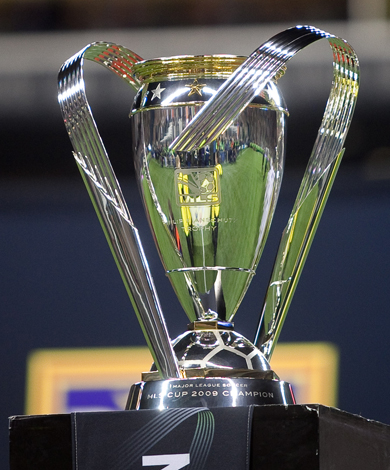 Why wait until November to talk about the MLS Cup playoffs?

A fortunate accident of the MLS schedule has all eight teams currently in playoff position in the league table playing one another this weekend. Given that the eighth seed, Seattle Sounders FC, resides four points above the next aspiring playoff hopeful, it is conceivable that the top half of the table will remain intact through the end of the regular season. In fact, the only likely changes will be a shuffling of the seeds from what would be assigned if the playoffs were to begin today.

Six teams from the Western Conference and two teams from the Eastern Conference make up the eight best teams in MLS right now. Columbus and FC Dallas appear to have the inside track on each regular conference championship, with New York Red Bulls and Real Salt Lake primed to finish as the runner-ups. The struggling L.A. Galaxy should lead the pack of four wild-card teams that should also include Seattle, the Colorado Rapids, and the San Jose Earthquakes.

While the games this weekend don’t reflect the most likely first-round playoff match-ups expected for the 2010 MLS Cup, they still provide a good measure of which of the eight teams have positive momentum going into the last seven or so games of the regular season. The marquee match of the weekend, and the night-cap on a busy Saturday schedule, is the contest pitting the two current conferences leaders — both with the same number of points in the chase for the Supporters Shield — Columbus Crew and L.A. Galaxy at the Home Deport Center.

Meanwhile, the other eight playoff hopefuls are also in action this weekend, with the best of that group having the potential to close the gap on the playoff eligible. However, in the interest of focusing on the best the weekend has to offer, and not another stinker like the TFC-Chicago scoreless draw, let’s take a closer look at the four matches that best approximate the match-ups we should see throughout the MLS Cup playoffs. While we are still in early September, that doesn’t prevent us from embracing the anticipation that otherwise waits until November.

Real Salt Lake at Seattle Sounders FC (Thursday 8 p.m., Qwest Field): The defending MLS Cup champions make their first visit to Seattle since capturing the title last November against the Galaxy. Jason Kreis has his team believing in a team philosophy that has RSL just one point back of L.A. in the conference. While not the juggernaut they are at Rio Tinto Stadium — a current 22-game unbeaten streak — RSL has improved dramatically on the road this season as compared the past. For the home side, Seattle will have the backing of 33,000+ fanatics willing their team to earn all three points from the defending champs. Potential league MVP Freddy Montero has fully emerged from the shadow of former Sounder Freddie Ljungberg and is poised to lead the Sounders back into the playoffs in their second year. This match-up may very well materialize in the first round of the playoffs, so expect fireworks from both sides. Prediction: 2-2 draw.

Colorado Rapids at New York Red Bulls (Saturday 4 p.m., Red Bull Arena): Another tantalizing match-up that seems very likely to be repeated in November kicks off at the crown jewel stadium of MLS this Saturday afternoon. The Rapids are firing on all cylinders offensively of late, with the potent duo of Conor Casey and Omar Cummings leading the way. After some early season adjustments, Colorado has found a grove that has put them safely into the fourth spot in the Western Conference. While their road record is not spectacular, the forward leaders of the Rapids will not be intimidated by playing at Red Bull Arena. For New York, after a disappointing road loss to RSL last weekend that saw them field a staring XI missing playmakers Rafa Marquez and Dane Richards, their international call-ups are back for this match-up and will want to keep pace with conference leaders Columbus Crew. Thierry Henry will also want to bounce back from his invisible performance last weekend in front of the home faithful. Prediction: 2-1 Red Bulls.

FC Dallas at the San Jose Earthquakes (Saturday 7 p.m., Buck Shaw Stadium): The hottest team in the league arrives in San Jose with no fear of playing away from Pizza Hut Park, as evident by their ongoing and MLS record 10 game unbeaten streak on the road. The youth movement brought in by coach Schellas Hyndman is already ahead of schedule, with Dallas surging up the league table and poised to earn a high playoff seed. Midfielder Brek Shea will again hope to haunt San Jose — he scored a brace for the Hoops 2-0 victory over the Quakes earlier this season — while veteran Jeff Cunningham will bring his late season finishing touch. The Earthquakes counter with their designated player Geovanni leading the charge and hoping to repeat the magic he brought to bear against the Dynamo last Sunday. If San Jose can field a healthy Khari Stephenson at the top of their diamond midfield formation, and Cornell Glen can finally slip a shot into the net, Dallas may finally see their 13 game unbeaten streak come to an end. Prediction: 1-0 Earthquakes.

Columbus Crew at the Los Angeles Galaxy (Saturday 7:30 p.m., Home Depot Center): With both teams tied atop the league table with 44 points, it is very possible that this match-up will be revisited as the 2010 MLS Cup final late in November in Toronto. The Crew are quietly closing in on their third straight Supporters Shield honor, while the Galaxy are struggling to return to the form that saw them roll opponents in the first half of the season. Columbus faces six road games in their next eight matches, and will want to keep the momentum gained from beating DC United on the road last weekend. Guillermo Baros Schelotto earned all three points for the Crew in the contest after scoring a hustle goal, and will need that same focus and intensity to lead his team to victory at the HDC. Meanwhile, the Galaxy look to get a boost from the possible return of the MSL original designated player David Beckham, who is expected to make his first appearance of the season for L.A. However, the fortunes of the club reside squarely on the shoulders of the Galaxy’s World Cup representatives Landon Donovan and Edson Buddle. Both players have struggled over the last four contests, and Los Angeles has seen their once thought of insurmountable lead in the MLS Western Conference evaporate. Even without expecting to make a lengthy appearance on the pitch, will merely the presence of Beckham be enough to inspire the Galaxy to return to form? Prediction 1-1 draw.

Its never too early to talk about the MLS Cup playoffs, and which teams will meet in Toronto with a chance to take home the trophy. So be thankful for the fortuitous regular season scheduling for this weekend and enjoy this early taste of what to expect in November.