MLS SuperDraft on tap this week for the Earthquakes

Share All sharing options for: MLS SuperDraft on tap this week for the Earthquakes 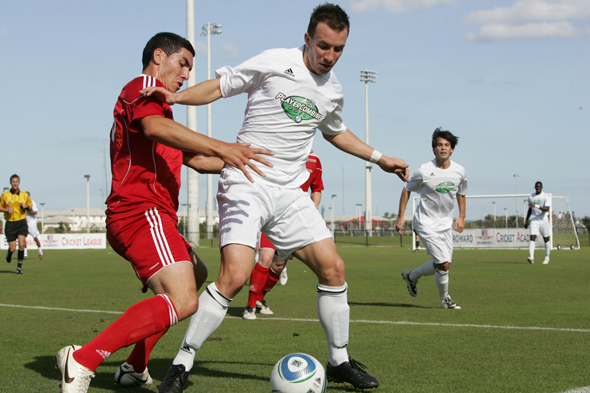 With the lack of activity surrounding the San Jose Earthquakes over the last few weeks, it would be tempting to say that things are all quiet on the western MLS front. However, that has not been the case for General Manager John Doyle and the Quakes coaching staff. With the departure of six players from the team since the conclusion of the 2010 season, San Jose has been biding its time in finding replacements. While in previous weeks scouting players from around the globe has been the task at hand, this week their focus turns squarely onto Thursday’s MLS SuperDraft.

That wonderfully American convention of a sporting draft gives all MLS teams a chance to pick up players from the college ranks that remain professionally unattached. Unlike in other parts of the world, and due to the nature of MLS being a single entity league where all player contracts are owned and administered from the head office, the individual teams do not partake in a free-for-all to sign players to their roster. Instead, each team expresses their interest in eligible college players — and new to this year’s draft, select international players — which are subsequently evaluated at the annual MLS Combine. The players in that pool most sought after by the individual teams before the draft are often signed by the league, with the most promising prospects offered incentive laden contracts through the Generation Adidas (GA) program. For 2011, ten players have agreed to GA contracts and are available for selection on Thursday.

This year the SuperDraft is being limited to three rounds, with the order of selection being determined by when the team finished play for the season — non-playoff teams select in reverse order of points earned, while play-off teams select in reverse order of playoff finish. Given the Earthquakes remarkable run to the Eastern Conference final against the Colorado Rapids, they will select fourth from last in each round of the draft. With expansion teams Vancouver and Portland selecting first and second respectively, the Quakes have been assigned the fifteenth pick. San Jose forfeited their selection in the third round this season to the Chicago Fire in the transition that brought defender Tim Ward to the team midway through the 2010 season.

So what does this all mean for the Earthquakes? With San Jose losing six players and not signing any to this point in the offseason, the draft provides a ready opportunity to address just a couple of the positional needs of the team. Those needs clearly are at forward, attacking midfielder, right winger, and goalkeeper. Look forward to needs the team might have beyond 2011, and left back should be added to that list. With the roster expanding to 30 players in 2011, though up to six of those slots can be filled with developmental or academy level players, the Earthquakes have 5-7 slots available in this offseason.

Given that players coming out of the SuperDraft do not have professional experience, expect Doyle and company to address the team’s greatest needs through trades and the open transfer market. To that end, the two players selected on Thursday should not expect to be game-changers for the team, but rather players that can build up their readiness through training and the MLS reserve league as the 2011 season progresses. Opportunities to play with the senior team will always be available — Steven Beitashour last season had some nice performances early in the season — but drafting at #15 and #33 will probably not result in any sure-fire starters.

Last week, in an exercise with other MLS beat reporters throughout the league, I participated in a mock draft hosted by SBNation.com. Tasked with evaluating the available players and matching them to the needs of the Earthquakes, I took the unconventional path of choosing two forwards with the team’s two picks. In round one, I selected Michigan forward Justin Meram and in round two Maryland forward Jason Herrick. Both players are graduating seniors that have already expressed interest in signing with MLS, and they are both currently participating in the MLS Combine going on in the days leading up to the draft.

Revisiting my assessment of the Quakes needs outlined above, and putting into context the value that can be gained from the draft, I felt the team would do well to find a pair of strikers that could be developed in training to be the back-ups for the forward pool of Chris Wondolowski, Ryan Johnson, and Scott Sealy. Neither Meram nor Herrick should be expected to start right away, but given their strong college careers, I expect that they will be strongly considered for first team minutes before too much of the 2011 season has elapsed. To get further perspective on both my mock draft selections, I spoke with MLSsoccer.com’s college writer Travis Clark over the weekend to get his impressions of the two senior strikers.

“Meram, despite really only coming into his own this season has a real nose for the goal that looks very natural,” said Clark about the Wolverine striker. “He has the ability to make quick decision with the ball and then follow that up with a very powerful shot.”

Meram had a fantastic senior season for Michigan, where he tallied 17 goals and 8 assists and led his team to the national semifinals — where they lost 2-1 to the eventual champions, Akron.

“He scored a highlight reel goal (out in Santa Barbara) against Akron during the NCAAs that is well worth viewing,” said Clark. “In that game, Meram showed the ability to use his speed and agility to take on defenders going toward goal.”

That skill should serve him well for a San Jose team that likes to defend first and then generate offense on the counterattack. With what he has shown so far, Meram would make a nice withdrawn forward just behind Wondolowski or Johnson that could carry the ball into the offensive third and play the dual role of provider and shooter.

In the second round, with my attention still focused on the San Jose need for offensive players, I selected Maryland forward Jason Merrick with the #33 overall pick. The scoring leader for the nation’s highest scoring college team, Merrick’s Terrapins narrowly lost to Meram’s Wolverines in overtime of the NCAA quarterfinals in 2010. Merrick finished the season having started all 23 games for Maryland while tallying 11 goals and 6 assists.

“I had a chance to see Merrick quite a bit this past year,” revealed Clark, who also doubles as the DC United beat reporter for MLSsoccer.com and lives in close proximity to the University of Maryland. “He is a hardworking forward that will not just wait up top for the ball, but will make the necessary moves to help the offense gain possession. His coach at Maryland says his game compares with that of Brian McBride both in his finishing ability and work off the ball.”

When I asked Clark about other potential draft choices that might be available to the Earthquakes in the draft, two names were mentioned — Akron midfielder Anthony Ampaipitakwon and James Madison University forward CJ Sapong. The tounge-twister named Zips midfielder shined during Akron’s run to the 2010 NCAA championship and has the potential to be an attacking midfielder or winger at the MLS level. Sapong plays a game very similar to Herrick, but has not had the same level of publicity leading up to the draft — a strong Combine could see the JMU striker move his way up the draft list. Clark and I also agreed that Stanford star midfielder/defender Bobby Warshaw was a potential target for the Quakes due to his versatility to play many positions — a talent rated highly by Head Coach Frank Yallop. Clark also mentioned the small cadre of international players invited to this season’s draft — players that we have little scouting to go on and may impress enough in the Combine to push their way up the order and drop the available college talent down to the lower picks.

The SuperDraft is just four days away, and player evaluations are still going on in earnest down in Florida at the MLS Combine. Will the Earthquakes target forwards in the draft on Thursday like I predicted, or might they go more for the versatile players that can potentially address multiple needs for the team? The team’s brain trust has not tipped their hand yet as to what direction they might take, but it does remain clear that the draft will be just one method by which they build their roster for the 2011 season.