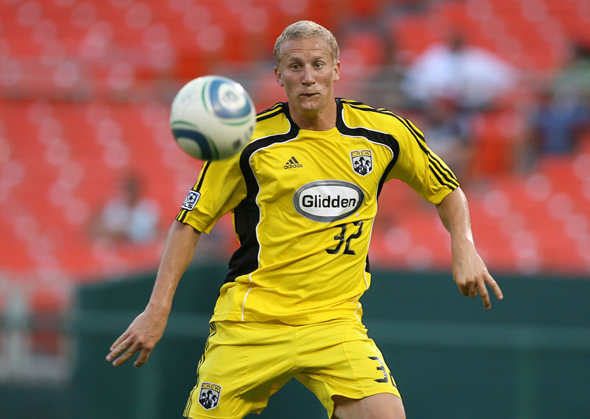 It was just another day not unlike the many that make up the MLS offseason for Southern Californian native Steven Lenhart as he was driving home through the streets of Yorba Linda, when his cell phone suddenly rang. On the other end of the line was the Columbus Crew — Lenhart was  the “player to be named later” in a trade to the San Jose Earthquakes for allocation money and a first round draft choice that had just been completed in that morning’s MLS Superdraft.

“I found out just when it happened,” recalled Lenhart as he relaxed on his porch later that afternoon. “I was driving and I got a phone call from the Crew, and then a call from Frank (Yallop) and the coaching staff. And that was kind of it. It really caught me by surprise.”

However, this was a good surprise for the three-year MLS veteran forward, who revealed he always had that itch to move back to the west coast at some point in his career. Satisfaction with the trade to San Jose was strengthened after hearing of the current wintery weather by his sister back in Ohio. After all, in the Southland the winter meant you might need to wear a long sleeve t-shirt instead of a short sleeve one. A California raised dude like Lenhart was always going to feel that pull to return closer to his roots.

“I’m excited, man,” said Lenhart, who actually was enjoying the good weather in his Orange County hometown wearing a more summery short sleeve tee and backward cap. “I’m from the west coast so just being out closer to my family and friends and also coming to a good team who did well this last year that has some confidence and is competitive will be fun. I’m really looking forward to it.”

While the offseason for Lenhart was more about relaxing and recharging his batteries while getting his body back in condition for another summer of soccer, the coaching staff of the San Jose Earthquakes were busy designing moves to help bolster the player roster in preparation for the upcoming season. In the days approaching the 2011 MLS Superdraft, the San Jose Earthquakes personnel brain trust of John Doyle and Frank Yallop were determined to identify a striker that could help the team immediately. They attended the MLS Combine games in Florida to evaluate the potential talent coming out of college and hoped to find a player that it their needs at the 15th pick in the draft’s first round.

In a noisy conference hall in Baltimore, among representatives from all 18 MLS teams plus a large contingent of chanting fans from across the country, Doyle and Yallop waited as the teams above them methodically made their selections. Yallop recalled that they had made overtures to other teams about trading away their pick, but were hoping to get someone who could make an immediate impact in return. When Real Salt Lake took a time out while deliberating over the 14th pick, the Earthquakes were afforded enough time to come to an agreement with the Columbus Crew.

“Yes, we were looking for a forward in this draft, whether that came in the first round or not,” said Yallop later that evening. “Steven Lenhart became that forward and he will be ready for the preseason from the beginning. It just made good sense economically to make the trade for our team, instead of using that pick.”

With the agreement in place, the Crew instead submitted their selection to MLS Commissioner Don Garber, who strode to the podium to announce that Columbus had selected Michigan forward Justin Meram with the 15th overall pick in the 2011 SuperDraft. With most of what was considered a pretty weak draft class already selected, Meram was a logical choice for the Crew, and perhaps would have been the right choice for the Earthquakes if they had kept their pick. Instead, Yallop has a player with MLS experience that can step right into the starting XI if necessary, instead of rookie that leaves that option uncertain.

“I think Steven Lenhart is a proven player in this league,” answered Yallop when asked to assess the qualities of the newest Quakes forward. “He is very difficult to play against. He’s played very well for Columbus, and every time we played against him, he was a real handful for our defenders. He is dangerous and strong as a forward and has those qualities that I like. When we were able to work out a package to bring him to San Jose, we felt it was a no-brainer for us. He’s a good player that is available for us from day one. I’m very excited about that.” 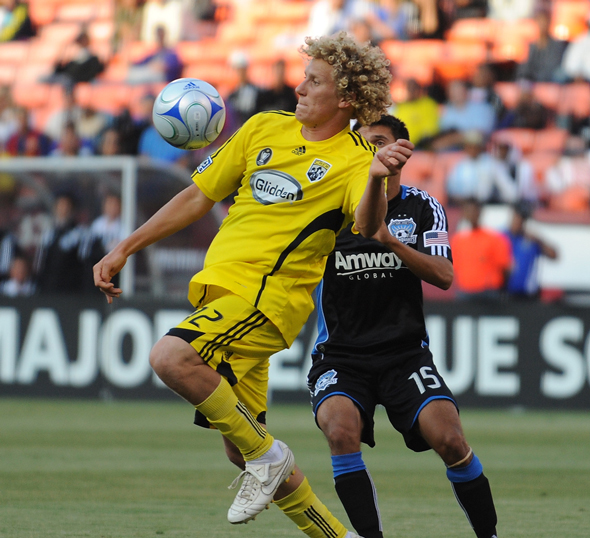 While with the Columbus Crew, Steven Lenhart proved to be an effective traget forward in matches against the San Jose Earthquakes. Photo courtesy of Joe Nuxoll, centerlinesoccer.com.

The player was excited by the news he was heading to San Jose; the coach was excited to get a player he has admired during his first years in the league. Like a Christmas present you unwrap already knowing what it is, you still look forward to getting it without the unnecessary surprise of wondering what it might possibly be.

As Lenhart’s conversation ended with the Crew and the shock of the news really hit him, he turned his attention to what ay in store for him in San Jose. His first call from the Earthquakes came from Yallop, a coach that he knows has a great reputation among MLS players.

“I’ve heard a lot of great things from guys that have played with him,” said Lenhart, without a hint of hyperbole in his voice. “He seems like a cool dude, and I am eager to get up there and learn from him and get to know him and contribute the best I can.”

Meanwhile, on the other end of that call, Yallop assured the young striker that he was very much wanted by his new team.

“I told him that he will really enjoy himself in San Jose,” said Yallop. “We have a fantastic group of players and he will fit in with what we are trying to do here. He is a hard working and honest player that likes to stretch his play in the right direction. Though I usually give limitations to players, when they can move forward and be effective, I let them go.”

Yallop went on to talk about some of his goals he’ll have for Lenhart in the 2011 season.

“Steven is a powerful and strong player, and has proven he can play in our physical league,” assessed Yallop. “Hopefully we can get him to the point where he’s playing terrifically well and he’s scoring goals and doing his thing. I think he has a bright future in MLS — remember he is only 24 years old.” 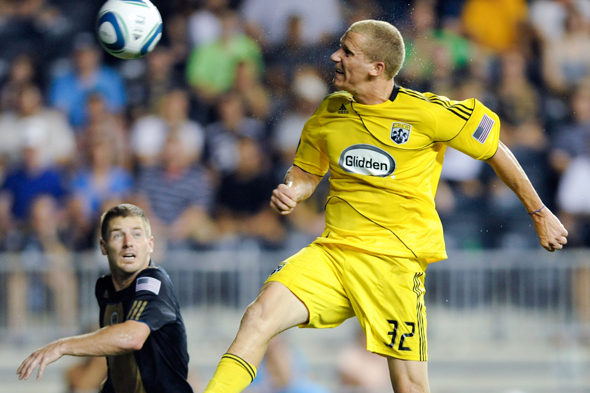 Head Coach Frank Yallop will want to see more scoring production from Steven Lenhart's aerial game in 2011, but will first need to work with the young striker to hone his skills. Photo courtesy of Howard C. Smith, isiphotos.com.

Indeed, Lenhart is less than two years older than the player he was essentially traded for in Meram, but has three years of invaluable professional experience with the speed and physicality that are the hallmarks of MLS. Lenhart has performed well and scored goals in all competitions — MLS, U.S. Open Cup, and CONCACAF Champions League — since entering the league as the 48th overall draft pick in 2008. For an Earthquakes team that wants to build upon last season’s playoff results and groom a true physical target striker, Lenhart provides a useful piece in the player roster puzzle.

“I love to battle and work hard and that really comes into play as the target forward,” said the 6’4” tall Lenhart. “You can talk so much about strengths and the way the team is going to be. But most of all I am exciting to be going out there and start training with the team, and doing what I can to fit in with the other forwards.”

When asked about what he expects of himself in the upcoming season, Lenhart is quick to put the needs of the Earthquakes first and not focus on any individual accomplishments.

“To be honest, I’m going to put the team first,” said Lenhart. “I want to contribute to the team’s success. Obviously, I’m a forward so scoring goals is one of those things. I think last year I didn’t do as much as I wanted to as far as scoring the amount of goals. So I’d say it’s important for me to become a better finisher. I have high standards, so I am going to push myself to really go for it. As far as a numeric goal, I don’t have anything specific. My priority is to help the team have a good season and push for a championship. I’m committed to doing just that.”

Of note for a player that often gets more attention for his wild hair than his scoring production, Lenhart is entering the last year on his current four-year deal with MLS and will be playing for a new contract with the league. Signed to the league minimum — currently $40K annually — Lenhart says it’s not all about getting a big pay-day, but about developing his game and becoming a better player and teammate.

"I’m commited to working hard either way, money or no money,” said Lenhart genuinely. “Soccer is what I’m doing and I want to put my effort toward it. I’m committed to being sharp. Sure, the money is obviously a part of the motivation. More than anything, I am looking forward to getting to San Jose and getting to know everyone there. I’m looking forward to that more than anything.” 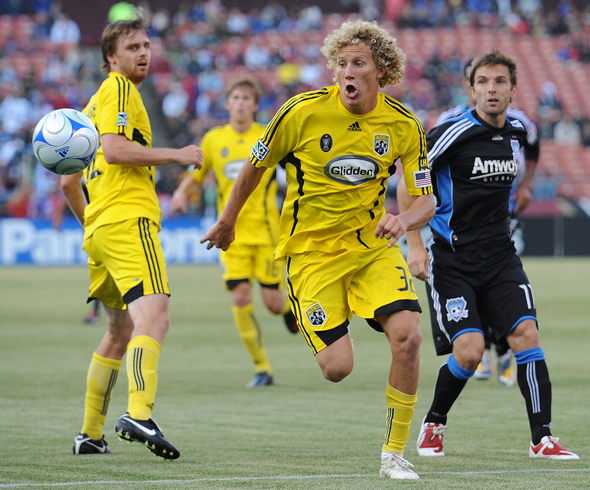 The prospects of joining the San Jose Earthquakes are exciting for young forward Steven Lenhart, and he hopes to put together a great 2011 season. Photo courtesy of Joe Nuxoll, centerlinesoccer.com.

With just 13 goals in his three seasons of limited playing time with the Columbus Crew, Lenhart feels that with the opportunity to play and the right system in place to complement his game, the sky is the limit for how many goals he can score. A year ago, the Earthquakes had another promising player at forward who shared that feeling, and he went on to win the MLS Golden Boot for most goals scored in league play. Coach Yallop is hopeful that whereas Chris Wondolowski enjoyed a breakout last season, Lenhart might repeat that feat in 2011.

“I do, I think there are goals in this kid this season,” said Yallop. “Hopefully we can help him hone his finishing ability. Sometimes all a striker needs is that confidence and he will really take off. I think you saw that with Chris (Wondolowski) this past season. I think Steven is ready to go and can be something special in San Jose. After his three years in Columbus he’s now joining us and hopefully he can have that Wondo year.”

If lightning strikes twice at Buck Shaw Stadium and Lenhart becomes this season’s Wondolowski, then the Earthquakes and their fans can expect another great year of soccer in San Jose.