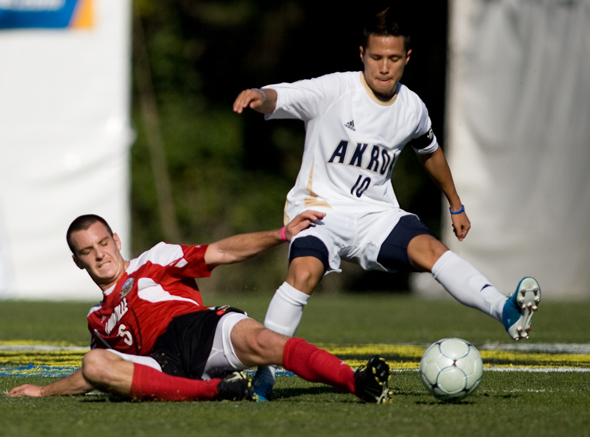 In the weeks leading up to the 2011 MLS SuperDraft, many soccer journalists had midfielder Anthony Ampaipitakwong rated as a mid-level first round selection. After all, the four year letterman from the University of Akron and co-captain his senior year had a sparkling resume of soccer success. Culminating in the 2010 NCAA College Cup championship, Ampaipitakwong — or Ampai (am-PIE) as he often goes by — had displayed a #10’s mentality in leading his Zips through a very successful season.

However, as the draft progressed through the first round and into the second, it was his Akron teammates who were getting selected in record numbers. Darlington Nagbe to Portland, Perry Kitchen to DC United, Zarek Valentin to Chivas USA, and three more before the San Jose Earthquakes were on the clock for the 15th pick of the second round, 33rd overall. Only then did Ampai get the news that he was on his way to MLS.

“I couldn’t even speak I was so excited,” said Ampaipitakwong just minutes after being selected by the Earthquakes. “I got a call from my agent that San Jose was going to pick me up. My mouth just dropped, it was a great feeling.”

While the rest of his draft-eligible teammates were in Baltimore to attend the event in person, Ampai was back in Akron where he was attending to school matters. When the bad weather prevented him from getting to Maryland at the last minute, he stayed at home and followed the proceedings in private. When the phone call came that he had been selected by San Jose, he was playing computer games and trying not to think too much about the draft.

Meanwhile, in that busy convention center conference room in Baltimore, the Earthquakes player personnel brain trust was thrilled to get the Akron product at such a late stage in the draft. Many pundits had downgraded Ampai following his performance at the recently completed MLS Combine in Ft. Lauderdale. The annual event for draft invitees comprises three competitive matches and numerous fitness evaluations during a compressed five day schedule. For some players, the spotlight shines brightly and their draft stock rises in the eyes of MLS coaches. For Ampai, the Combine did not showcase the ability and winning attitude he had so featured during his college career. Quakes head coach Frank Yallop was not deterred by the midfielder’s travails in Florida, and was pleased when he was still available late in the second round.

“I know a lot of coaches liked him, but he didn’t have a great combine,” said Yallop. “But it’s more than that. You have to look at what his college team did and realize that he can work much better with his team an not a bunch of new players. Our scouts have all said that he is a skilled soccer player that can do well in our league.” 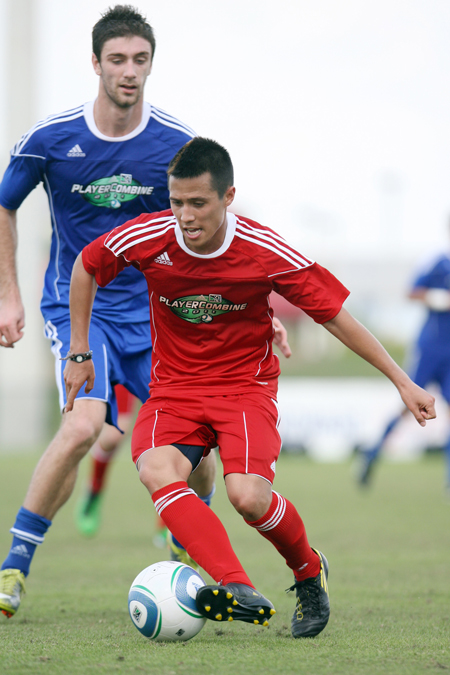 Ampaipitakwong remained realistic about his chances of getting drafted high in the first round after the Combine performance. The Akron co-captain had already come to grips with the various assessments that proclaimed he was too small for the rigors of MLS; that his possession style of play would not work in a league where defenders were too strong and too fast; that succeeding against college competition was not enough to warrant a first round selection. But Ampai never stopped believing in himself, and is now ready to face the challenge of playing professional soccer.

“I’m the kind of player that likes to link up with other players and move the ball and attack together as a team,” explained Ampai, “but the Combine is more a collection of players that you don’t know. I was forced to call players by the numbers on the backs of their jerseys because I didn’t know their names. That made it very tough for me, because I rely on knowing what my teammates are going to do and what they are capable of doing. It made it very hard to mesh with the other players at the Combine and to be able to effectively link up with them.”

Prior to enrolling at the University of Akron, Ampaipitakwong was a member of the famed IMG Soccer Academy in Bradenton, Florida. The full time residency program for youth soccer players in the US Soccer national team program provided an excellent atmosphere for the Texas native to hone his skills with some of the best youth players in the country.

“Down in Bradenton, I was playing alongside Michael Bradley and Freddy Adu,” said Ampai, “as well as numerous players from my class which are currently in MLS. The experience was valuable for me in helping me do well at Akron and become the professional athlete I hope to be.” 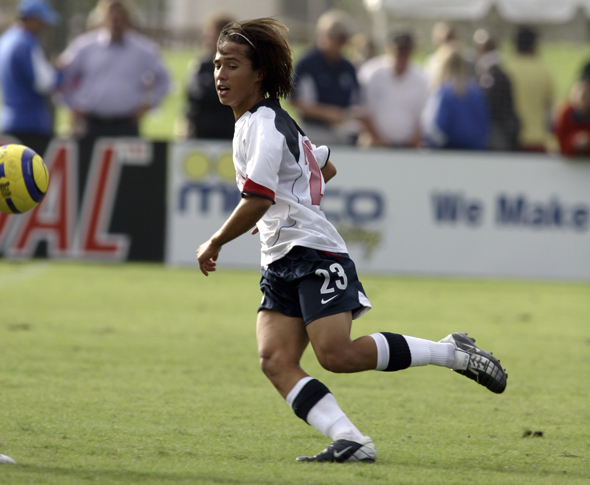 Ampaipitakwong was a member of the IMG Soccer Academy prior to joining the University of Akron Zips. Photo courtesy of J. Brett Whitesell, isiphotos.com.

Not only did Ampaipitakwong do well at Akron, his team captured the recently contested NCAA College Cup to take the national championship back to Akron for the first time in school history. The year prior they were runners-up to the national title. Ampai, at the time sporting a creative two-toned Mohawk-inspired hair-style that looks perfect for the world of professional soccer, played brilliantly at the Final Four in Santa Barbara. The hallmarks of his game — possession passing, quick movements into space, tracking back to help the defense, and creativity in the attacking third — were in full display in victories over Michigan and Louisville.

The Zips do not play a straightforward and physical brand of soccer. Instead, head coach Caleb Porter — a former player with the San Jose Clash — taught a style at Akron that is more reminiscent of the Spanish game. Porter has been known to show video of Barcelona playing in order to reinforce their good practices of ball control and movement. When Ampai came to Akron, he immediately knew he was capable of being an orchestrator of that style of play and he settled in quickly as a team leader.

“Coach Caleb (Porter) built an outstanding program through some good recruits,” explained Ampai, “and by using his knowledge and experience to have us train in a professional style environment. It showed after this season by getting so many players into the pros how effective that system can be.” 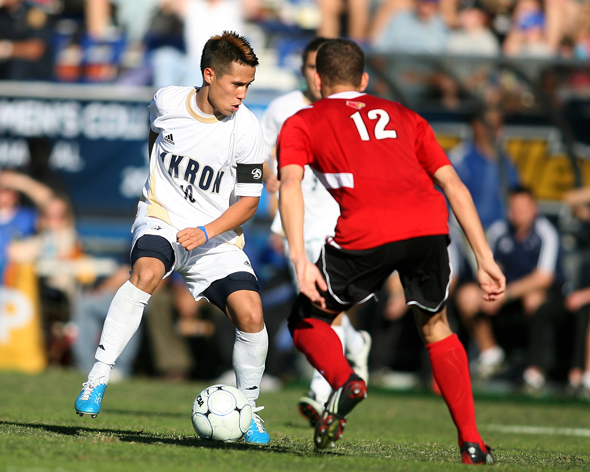 For Yallop and the rest of the Earthquakes coaching staff, they were also well versed on the program that Porter had put together in his five years at the Ohio university. The Zips head coach was very proud in his central midfielder’s accomplishments since arriving in Akron, and was happy to let Yallop know what to expect when he enters MLS.

“Our coaching staff has had the chance to see him play quite a lot,” said Yallop, “and I watched him more last season when we didn’t play late into the year. I spoke to Caleb Porter before the draft, and he loved him and said he’s going to be a good solid player, very good on the ball, clean with possession. He has a bit of a strong streak in him; he is not afraid to track back and get into a tackle when he needs to. I’m very excited to have him.”

Good with the ball, but also not afraid to get stuck in — virtues that Yallop prizes in players he brings to San Jose. Ampaipitakwong matched the coaches’ assessments of his play and what he hopes to bring to his professional career.

“I like to move the ball fast and have a quick rhythm to my game,” said Ampai. “I like reading the game and knowing what I need to do next. I like to work with the defensive and outside midfielders to gain possession as well as find a way to link with the forwards to get into the attack.”

Ampaipitakwong tallied three goals and eleven assists his senior season in Akron, while wearing the proverbial #10 jersey for the championship side. Perhaps that kind of player is what is missing in the San Jose line-up, and the rookie, if signed to the club, will have the opportunity to bring that game to Buck Shaw Stadium. Coach Yallop was a bit more cautious in projected that type of impact from the 22 year-old.

“While it is the position he played in college, I am not sure he is ready for that yet,” said Yallop. “I think he is good at keeping the ball moving and has good composure between players. He’s a strong possession player. Is he ready to take the ball directly at defenders? Not at this point. I think he will be better fitting into our style of play where he is part of the attack. He is still young and will need to adjust to the speed of the league, and when he does, I expect him to do well.” 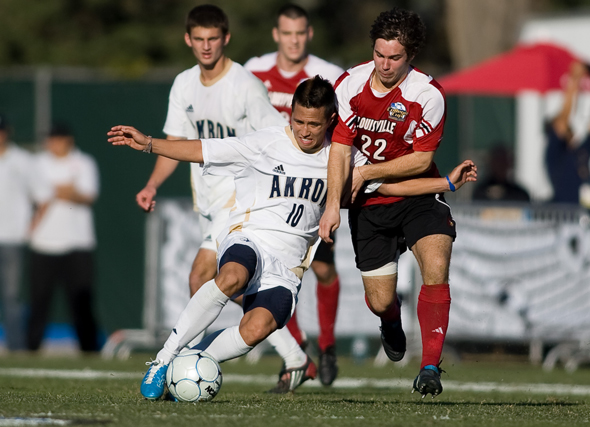 Ampaipitakwong fends off a defender and keeps control of the ball during the 2010 NCAA College Cup Final. Photo courtesy of Michael Janosz, isiphotos.com.

The question of transitioning to the speed of the professional game is a valid one, especially when you add in the increased physicality of the MLS game into the mix. Space to create is at a premium in MLS, and defenders are very quick to close down on players with the ball to prevent such possession tactics from being effective. Ampaipitakwong recognizes that challenge, but feels equipped to handle the change in pace, and is not worried that he won’t be able to adjust his game.

“Not at all,” said Ampai flatly. “Of course, you have the luxury in college on having plenty of time on the ball. I’m looking forward to the fast-paced style in the pros, especially since that was what we tried to do at Akron.”

He went on to credit some of his former Zips teammates that are currently playing in MLS whom with he continues to have consistent communications.

“I’ve talked to Steve Zakuani at Seattle quite a bit,” shared Amapi. “We were roommates while on the road for Akron and got to know each others' game well and become good friends. I also grew up with Blair Gavin, who’s now at Chivas USA. They have both told me that the pace of the game is faster in MLS — the ball movement is really fast, the defenders close down much faster — so it is important to get the ball off your feet.”

Ampaipitakwong will have his first chance to make the team when the San Jose Earthquakes begin preseason training later this month. With the departure of creative midfielder Geovanni at the conclusion of last season, and the return to full health of Andre Luiz still to be seen, the opportunity looks good for the rookie to make a good impression on Yallop and the coaching staff and earn a contract with the senior team. Ampai certainly has the confidence and resume suggesting he will do just that.