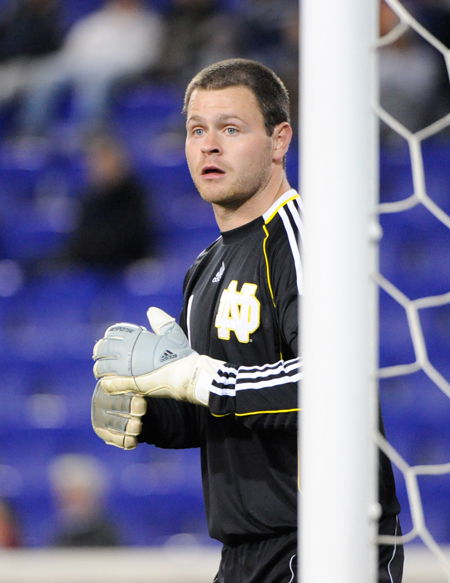 Someone might want to send a case of caulking over the MLS headquarters in New York, because there have been a lot of drafts coming from the league since the end of the 2010 season: Expansion Draft, Re-entry Draft — Stage One and Stage Two, SuperDraft, and finally Supplemental Draft. In that final draft held earlier today, the San Jose Earthquakes selected two players — goalkeeper Philip Tuttle from the University of Notre Dame and defender/midfielder Victor Cortez from the University of San Francisco.

Tuttle, a fifth year senior for the Fighting Irish, was selected #33 overall in the Supplemental Draft, and was the fifth goalkeeper selected to that point in the proceedings. Tuttle led his team to a 10-6-4 record in 2010 and a second round overtime exit in the NCAA tournament to Dartmouth. He was not invited to the recently completed MLS Combine, but has shown an improved statistical measure in each of his three final years at Notre Dame. He is a familiar commodity to the Earthquakes coaching staff, as Tuttle spent time training with the team last summer in San Jose.

Cortez fashioned a good career at USF, where he was asked to play defender and midfielder during his four year stay. A starter for 60 of 71 games he played for the Dons, Cortez was the kind of two-way player that is valued by the San Jose coaching staff. Prior to his Dons career, Cortez spent time with the U.S. Men’s National Team Under-20s program.

Both players will be invited to attend the San Jose Earthquakes preseason training camp starting later this month. With MLS team rosters expanded to 30 players in 2011, both will have a good chance to make it with the team.