Share All sharing options for: Earthquakes open preseason training with optimism for 2011 season 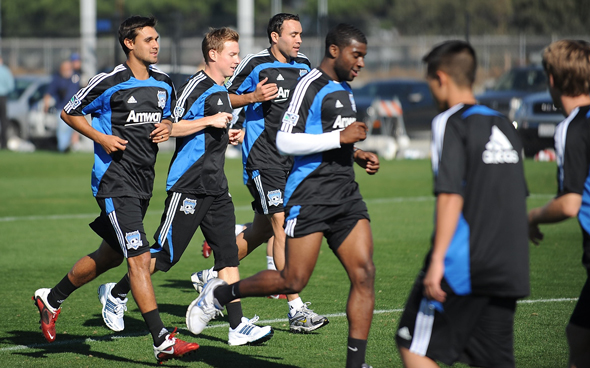 The calendar still read January, but the weather was more suited to June at the Nutrilite Training Facility in San Jose for the Earthquakes first training session of the 2011 MLS season. As in years past, the preseason starts with a few days of fitness drills and running exercises before any balls are rolled out onto the field. The Quakes will follow a regimen similar to 2010, when Head Coach Frank Yallop and his assistants focused squarely on getting the players fit and strong ahead of the season opener.

In all, 25 players were on hand under the pleasant winter sun, with all but Jason Hernandez and Scott Sealy present from last year’s holdovers. Both are expected to be with the team in the coming days, but were excused from Thursday’s practice. Attending their first Earthquakes training session were drafted newcomers Anthony Ampaipitakwong and Philip Tuttle, ex-Columbus Crew forward Steven Lenhart, newly assigned goalkeeper David Bingham, and the still unofficially signed ex-Montreal Impact midfielder Tony Donatelli. Draft choice Victor Cortez has not yet joined the team, and two goalkeeping hopefuls Andrew Weber and Brian Edwards return to the mix.

On the injury front, just Andre Luiz, who is still recuperating from season-ending surgery last summer, participated fully in fitness drills. The Brazilian midfielder is expected to be back to full training within a month, but will need further evaluation to deem whether he is ready to return to the starting XI prior to the season home opener against Real Salt Lake. Sam Cronin, who picked up a slight injury while away at National Team camp, was back in full action, as was last year’s rookie sensation Ike Opara. Joey Gjertsen was moving around at 100% and was pronounced ready to go by Coach Yallop.

Not much else can be gleaned from watching a bunch of guys running back and forth on the pristine green grass of the NTF. However, unlike in seasons past, when the team was forced to practice at a myriad of fields throughout the Bay Area, the team looked very comfortable training on familiar ground. Couple that with the core of the team returning for another year together, and the players picked up like the 2010 season had never ended.

The fresh faces in camp received most of the attention of onlookers, especially the much touted goalkeeper from Cal, David Bingham. Both Yallop and General Manager John Doyle were still smiling over their good fortune at winning the weighted lottery for the ‘keeper’s services. Instead of entering the season with a back-up to incumbent Jon Busch in Joe Cannon earning close to $200K a year, the Quakes get a Generation adidas signing in Bingham that counts zero against the salary cap. Busch, while no means ready to relinquish his role as a starter, should also prove to be a solid mentor for the young Bingham in his rookie season, while potentially spelling the MLS veteran in matches outside of the league schedule.

Speaking of, still no word on whether MLS will participate in the SuperLiga competition this season. San Jose has been mentioned as one of the four teams selected by MLS to face a quartet of Mexican Primera League clubs in the annual summer exhibition tournament. With rosters expanding to 30 players this season in order to accommodate the return of the MLS reserve league, that should provide Coach Yallop with plenty of player options for additional tournaments like SuperLiga and the Lamar Hunt U.S. Open Cup. With more and more fans showing interest in these competitions, the impetus returns to the teams to put forth their best efforts.

Back off the soapbox, and back to the action at the NTF. The biggest question mark going into the season is whether the Quakes have the personnel to meet and exceed last year’s surprising run to the Eastern Conference Championship match. MLS welcomes two more teams to the league in Vancouver and Portland, so there will be more teams in the fray. However, MLS has also announced that 10 of the 18 teams will qualify for the postseason — an increase from 8 of 16 teams in 2010 — thus making it easier percentage-wise to enter the MLS Cup playoffs. Since the majority of league followers still consider the MLS Cup the ultimate prize, it would be simple to say that the Quakes will contest for that trophy again in 2011 with the roster they already have. Sure, the Supporters Shield award to the team with the best record in the regular season might be out of reach for this team, but does that really matter when the Cup is where it’s at? Perhaps all this team will need is a few more starter-level players to contend for the Shield as well, but a regular season finish closer to the middle of the pack seems most reasonable to predict at this point.

Of note for the Earthquakes as this preseason rolls on is the scheduled trip to England to train at the grounds of Tottenham Hotspur. A repeat of last preseason’s endeavor should again prove advantageous for the team in terms of building camaraderie and cohesiveness. Add in the prospect of playing some high-level friendlies while in North London, and the trip looks even more attractive. Jason Hernandez, Ryan Johnson, and others praised the organization for taking them to England last season, and credited the trip with bringing focus to the team ahead of the season. Sure, they went out and lost 3-0 to defending champs Real Salt Lake, but they did not collapse after that performance, and went on to a successful season.

As for Coach Yallop and some of his goals for the 2011 season, the chief among them was making Buck Shaw stadium a more difficult place for opposing teams to visit. Complacency seemed to permeate the team for stretches during some home games last season, and Yallop singled that out as an attitude to change this year. The Quakes rode their fine road results to a playoff berth, and go do much to improve their seeding this time out with a focus on getting more points at home. With some players excited as they expect bigger crowds at Buck Shaw motivated by the team’s run in the playoffs, the message was that the team needs to reward that with home wins.

Lastly, the competitions to make the preferred starting XI take on more importance in the coming weeks. Five goalkeepers — four more than at one point last summer — are in camp with hopes of making the final three selections to the 30 man roster. MLS will require three GKs at a minimum, and the Quakes roster is unlikely to field more than that number. Central midfield also presents an interesting battle over the next two months. Brad Ring, Sam Cronin, possibly Brandon McDonald will all look to secure the defensive midfielder role, while newcomer Ampaipitakwong takes on veterans Andre Luiz, Scott Sealy, and possibly Khari Stephenson — contract negotiations with the Jamaican are still ongoing — at the attacking midfielder position. If Sealy slots in more as a forward, then he, golden boot winner Chris Wondolowski, Ryan Johnson and Steven Lenhart look to be likely candidates up top.

Speaking of Wondo, he revealed that he has a new contract with the Earthquakes that will pay him considerably more than the $48K annually he was earning before. While that salary figure has gone unannounced to this point, it was worth noting that Wondo was driving a new Lexus away from training grounds after practice instead of the old SUV he has used since high school. Good on him, an 18-goal season deserves a good treat. Finally on the Wondolowski front, today (January 28, 2011) is his 28th birthday. Be sure to send him your birthday wishes, and look to buy him a drink if you see him out on the town celebrating.

Stay tuned to Center Line Soccer for more preseason reports in the coming weeks. Thanks for reading!