Share All sharing options for: 1-1 tie with Sporting Kansas City has San Jose Earthquakes on brink of playoff elimination 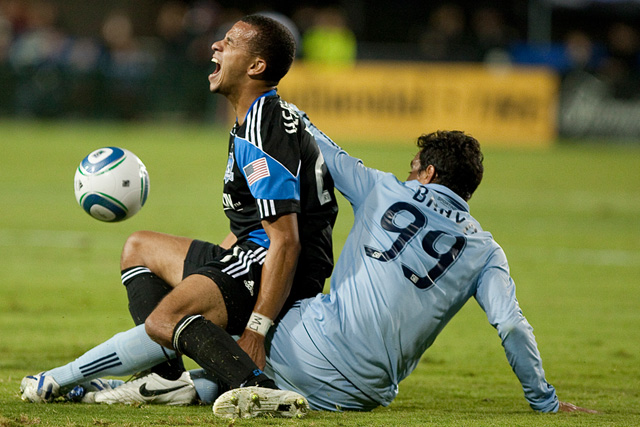 (Santa Clara) For the third time in the last four games, San Jose scored first but failed to win the game as the Earthquakes battled to a 1-1 tie with Sporting Kansas City Saturday night. Chris Wondolowski’s 85th minute goal was answered seconds later by by Kansas City’s Teal Bunbury, leaving the Earthquakes close to being mathematically eliminated from playoff contention.
"It kind of sums everything up this year. When we need to get a win we can’t do it," San Jose coach Frank Yallop said. " We deserved our lead. To be 1-0 up in the 85th minute and concede is not good."
The tie, San Jose’s third straight 1-1 outcome, leaves them 8 points shy of the last playoff spot with just three games left on their schedule.
"This has been the story of our season, right here," goalkeeper Jon Busch said. "It’s about finishing games off, and unfortunately, we didn’t do that again tonight. To give up a goal right after you score a goal, it hurts. We worked so hard for 85 minutes and we got our goal. And we just switched off for a minute, and that’s all it takes in this league. You give a team one good chance and they tie it up, and you go from three points to one point. It’s happened too many times this year."
For most of the night, it appeared that the two clubs would be playing to a scoreless draw. San Jose had a majority of the possession in the first half, but did little to trouble Kansas City goalkeeper Jimmy Nielsen. The ‘Quakes were credited with 15 shots in the opening period, but none on goal. San Jose’s best chance came one minute into the match when Simon Dawkins teed up Ramiro Corrales for an open 15 yarder, but Corrales’ right footed effort went wide left.
Against the run of play, Kansas City almost broke through at the half hour mark when Jeferson sent Omar Bravo in on goal. San Jose’s Jon Busch came off his line to challenge the shot near the top of the penalty area, and Bravo was able to flick the ball over the onrushing goalkeeper. A hustling Steve Beitashour cleared the shot away just two yards shy of goal.
After intermission, Kansas City threatened to go on top several times in the next quarter hour. Jon Busch had to be on his game to deny Teal Bunbury from a tight angle in the 54th minute, and came up with a quality kick save in the 62nd minute to again deny Burbury from close range.
The Earthquakes took their brief lead with just five minutes left in regulation time. From his right back position, Steven Beitashour moved up the wing and curled a long ball into the box for Chris Wondolowski, who banged it home from eight yards out. It was the 12th goal of the year for Wondo, and the 33rd of his career, lifting him past Landon Donovan as the second all-time leading scorer in franchise history.
The celebratory confetti was still airborne when Kansas City scored the equalizer. From the kickoff, CJ Sapong slalomed through three San Jose defenders, then slipped a pass through to Teal Bunbury for an open shot from 15 yards out. Bunbury drilled a low shot past Jon Busch for his eighth goal of the season.
"We had five guys who could have affected the play," Frank Yallop said. "You want that play back. We had a chance to foul them at the half way line. We had another chance to foul Sapong 30 yards out, another chance to foul him or stop the play, and then we had a chance to go with the runner and we didn’t go with him. So that’s the story of that goal.
"We’ve got to mean business with five minutes left in the game," Yallop continued. "You’ve got to go in hard, and you’ve got to stop the play, no matter what it takes. You’ve got to see that game out. If they would have scored off a set play that came from the foul we created then you’d say, "okay," but you don’t let a fellow waltz into our defensive third and slip a ball through and basically shoot uncontested. Nobody touched the ball from the kickoff from us. We had chances to make a difference on that play."
"I feel bad for the boys, because they really put it in for 85 minutes. And we just turned off one time," Jon Busch said. "Good teams, teams that go to the playoffs, win that game 1-0. We did it last year. How many games did we win 1-0, or 2-1, where we were taking a lot of heat? This group can do it. For whatever reason we’re not doing it this year."
Kansas City, now with 45 points, would be tied for fifth if they played in the MLS West, but as luck (and the commissioner’s office) would have it, they are in the MLS East, where their record has them sitting atop the division.
San Jose’s slide from a winning record to today’s troubles began with a 1-0 loss in Kansas City back on June 17. Before that game, San Jose was 5-4-4. The Quakes have gone 1-7-10 since.
The Earthquakes have road games at New England and Seattle before closing out the schedule at home against Dallas.