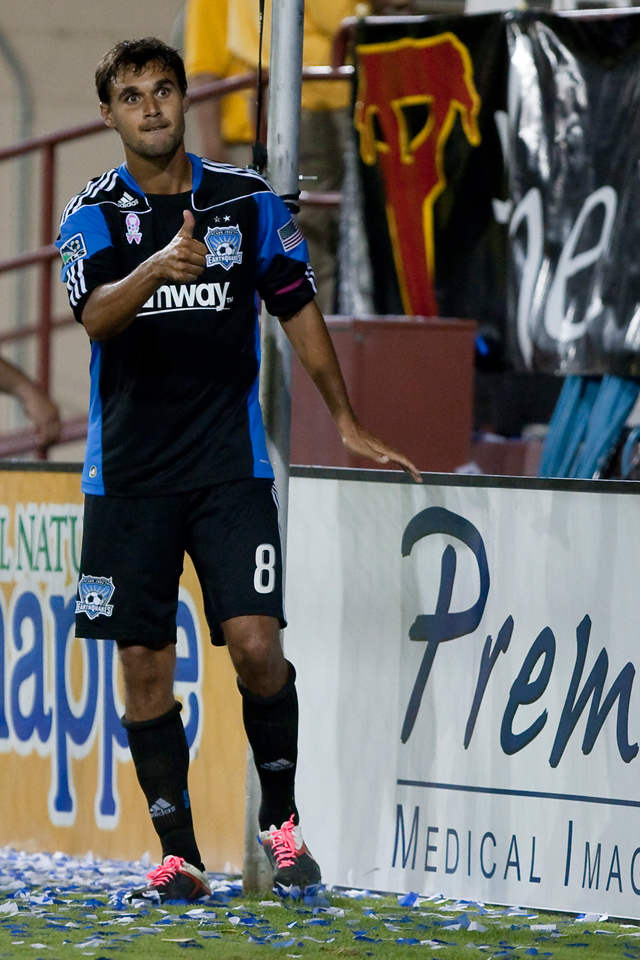 Chris Wondolowski shows appreciation for a pass from a teammate that provided a scoring opportunity. Photo: Kelley L. Cox, centerlinesoccer.com.

(Santa Clara) As the San Jose Earthquakes closed out a frustrating 2011 campaign, there was one thing left to play for: a scoring title for Chris Wondolwoski. And, like most of the season, Saturday’s night game was bittersweet for the Buck Shaw faithful. Wondo scored once to tie Dwayne DeRosario as the league’s top scorer, but was denied the golden boot by a combination of FC Dallas goalkeeper Chris Seitz and the crossbar.

Wondolowski scored his 16th goal of the season on a penalty kick midway through the first half, but couldn’t come up with another goal as the Earthquakes beat FC Dallas 4-2.

DeRosario, who also netted 16 goals this year, wins the golden boot via the first tie breaker: he has 12 assists Wondolowski’s 4. Still, the Earthquakes forward was all smiles after the match, sharing the league scoring title after winning the golden boot last year. "It means a lot," Wondolowski said. "I’m glad I can show myself and others, the league and my teammates, that I can do it, that the first one wasn’t an aberration. I’ve always had belief in myself, but you have to prove it to others."

"It’s a shame," coach Frank Yallop said. "Everyone was hoping and praying he would get the goal for the goal scoring title. On a night when (Wondolowski) has five pretty good chances to score and only gets one, it’s not like Wondo. Great season from him, and a good end to a tough year for everyone."

Dallas, looking ahead to the upcoming playoffs, did not play many of their regular starters Saturday night. Brek Shea and Ricardo Villar, banged up in last Tuesday’s CONCACAF Champions League match against Toronto, did not dress for the match. Neither did team captain Daniel Hernandez, midfielder Andrew Jacobson, and goalkeeper Kevin Hartman. The Hoops also were without Jackson Goncalves, who was sitting out a one game suspension for yellow card accumulation.

San Jose took full advantage of the depleted Dallas line-up, erupting for four goals in the first half. The Earthquakes opened the scoring in the 26th minute when Simon Dawkins stole the ball from Dallas defender Jeremy Hall just outside the penalty area and fired home a right footed shot from 20 yards.

Just a minute later, Rafael Baca made it 2-0 for the home side. Steve Beitashour sent in a cross from the right wing that bounced across the face of goal, finally reaching Baca at the far post for a diving header from close range. For Baca, it was his first career MLS goal.

Then came Wondolowski’s turn. In the 34th minute, Dallas’ Jair Benitez pushed down Steve Beitashour inside the penalty area as the two of them raced to chase down a long ball out of the back. Referee Kevin Scott pointed to the penalty spot, and up stepped Wondolowski. On the penalty kick, Dallas goalkeeper Chris Seitz guessed the right way, but still couldn’t stop Wondolowski’s blast inside the left post to extend San Jose’s lead to 3-0.

"It’s 12 yards out. As a forward, you should always make it," Wondolowski said. "I saw the keeper guess right, so I was little fortunate (to score)." The goal was Wondo’s sixth in the season’s final 5 games.

As the fans chanted "golden boot," San Jose made it 4-0. From the top of the arc, Khari Stephenson lofted a pass to Wondolowski breaking into the penalty area. Jair Benitez knocked it away from Wondo, but the ball rolled to Simon Dawkins for an open shot from eight yards out. Dawkins banged it home for his second goal of the night and sixth of the season.

The Earthquakes four goals in a half was one shy of the team’s all-time best, a record set back in 1996 against New England.

Dallas got on the scoreboard in first half stoppage time. Daniel Cruz sent a corner kick to the far post, where Jack Stewart rose above the defense to head it back across the face of goal, where George John headed it home from point blank range.

After intermission all eyes were on #8 in black, as the Earthquakes created several more chances for Wondo to score. "I’m fortunate to have teammates like I do," Wondolowski said. "They were feeding me the ball non-stop all night."

Wondo was gifted a golden opportunity in the 55th minute when Justin Morrow rolled a centering pass in from the left wing that was misplayed by the Dallas defense. The ball fell to Wondolowski six yards from goal, and he slammed a shot that Dallas ‘keeper Chris Seitz deflected off the cross bar.

"I went hard.I kicked it as hard as i could, and he saved it," Wondolowski said, "He’s a good goalkeeper, it was a good save by him."

Wondo was again denied by Seitz in the 71st minute, when Joey Gjertsen let fly from 20 yards, a shot that Wondolowski re-directed on goal.

"I thought the re-direction was a pretty good save, too. The ball’s coming in to the far post; if I don’t touch it he has to be ready for that. He had to change directions and get down low. I’ve got to put that more in the corner; I put that right to him. But those two saves were pretty impressive."

Wondo’s last chance came with three minutes left on the clock, a right footed blast from the top of the penalty area that Seitz easily punched away.

Dallas closed out the scoring in the 90th minute with a Ruben Luna goal, as San Jose continued to push forward in hopes of giving Wondolowski one more opportunity.

"Although (Wondolowski) is a quiet person, he’s a leader, because he never gives up, he always tries his best." Frank Yallop said. "He wants to play every minute of every game. For a coach, it’s fantastic to have that. He has the total respect of his teammates, and that’s why we were just trying to get him that goal so he would win it. We want him to do well, because he’s such a nice person, and such a good player. We’re very happy for him."