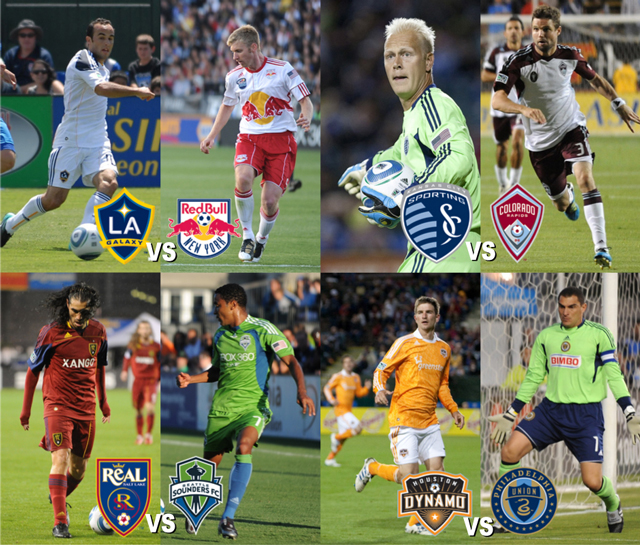 With the two wildcard play-in games completed in the middle of the week, the eight teams remaining in the hunt for the 2011 MLS Cup championship enter the quarterfinal stage of the postseason tournament. As in the past couple years, the league offers up four pairings of opponents that will play in home and away series to decide the finalists for each conference final. Played over the course of a short week, the quarterfinal matches feature four very intriguing match-ups, including a couple of mouthwatering pairings in the dominant MLS Western Conference.

After a tumultuous year playing in the shadow of the Big Apple, the New York Red Bulls clinched the final wild card spot in the 10-team postseason field in their last game of the season. By virtue of their win-and-your-in wildcard match-up with a FC Dallas team that limped into the postseason as the fourth place finisher in the Western Conference, the Red Bulls made haste of their tired Texan opponent and earned the right to face off against the top seed in the MLS Cup tournament — the Los Angeles Galaxy.

Yes, in a scenario favored by the league that was second only to the two flag bearer clubs of MLS meeting in the final, the Designated Player laden sides from both coasts now play each other twice in the next week. While going into the playoffs the Galaxy would have hoped for more of a reward for their first overall place finish in the league and the accompanying Supporters Shield trophy, they instead are faced with a taxing cross country home and away series against a dangerous sleeper side in New York.

Prediction: Galaxy advance with ease as Red Bulls falter in both legs.

Meanwhile, in the other wildcard play-in match, the Colorado Rapids held serve at home to the Columbus Crew Thursday evening and now await an intriguing quarterfinal pairing with Eastern Conference leader Sporting Kansas City. The Rapids bring their suffocating brand of defensive minded soccer to the postseason — a strategy that helped them capture the MLS Cup in 2010 — while Sporting KC feature an offensive laden squad that will look to score early and often. Even though the Rapids finished fifth in the difficult Western Conference, they are expected to play the role of slight favorites when it comes to their match-up with Sporting. In fact, survive against KC and then away to another foe in the conference final, and the Rapids could represent the Eastern Conference in the MLS Cup Final for the second consecutive year.

Prediction: After a scoreless draw in Colorado, Sporting KC advances with a late second half surge in the return leg.

Staying in the Eastern Conference, the other quarterfinal pairing features second year expansion side Philadelphia Union taking on the momentum riding Houston Dynamo. Philly made great strides in their sophomore season to nearly capture the regular season conference crown, but settled for one of three automatic bids to the postseason with little regrets. Featuring a late season renaissance from forward Sebastien Le Toux, the Union hope to Doop their way to the MLS Cup Final behind the Frenchman’s renewed offensive prowess. If their defense can cut down on the mistakes that have led them to concede a large number of unnecessary goals this season, Le Toux and crew up top might be all this team needs to succeed.

The Dynamo, perhaps feeling some relief at being transitioned to the weaker Eastern Conference from the tougher Western Conference prior to the start of the 2011 season, are playing with house money at this point in the year. With MLS MVP favorite Brad Davis pacing the way for the Orange with his consistent play from the midfield and a league leading 16 assists, the Dynamo will look to outplay the Union at their own style and tactics. This head-to-head meeting has all the look of a street fight series between the two workmanlike squads.

Prediction: The Union find a way to turn a first leg deficit into a victory on aggregate with a solid performance in Houston.

The last of the four quarterfinal pairings is also the most anticipated, as the high-flying Seattle Sounders battle over two legs with Real Salt Lake. Two sides that have for similar reasons captured the imagination of their local audiences, as well as neutral observers of MLS, the Sounders and RSL match-up would make for a very fitting MLS Cup Final. Instead, the two teams that finished with the second and third best records in the league will clash in the round of eight this year.

The Sounders are already flying high this autumn, having captured the U.S. Open Cup championship as well as secured passage into the knockout rounds of the CONCACAF Champions League. Featuring retiring goalkeeping legend Kasey Keller, Seattle will be looking to secure their first playoff victory this postseason, after coming up short the past two years. If they can overcome the expected absence of playmaker Mauro Rosales in leg one of the home and away battle, the Sounders will return to the rambunctious and vociferous crowd at CenturyLink Field and its decidedly advantageous hometown environment to closeout the series.

Real Salt Lake, after a near miss at capturing the CONCACAF Champions League title earlier this year, seemed to go through the motions at times over the long haul of the regular season. However, despite playing with that apparent ennui, RSL still had the depth of talent on their roster to finish comfortably in third in the Western Conference. Now with playmaker Javier Morales back with the team after a lengthy spell rehabilitating a nasty ankle injury, the Claret-and-Cobalt look to make it back to the MLS Cup Final for the first time since they won it all in 2009. Incidentally, that championship was won on the home field of the Sounders — RSL should have no fear of playing in the intimidating atmosphere of Seattle.

Prediction: The Sounders finally get their first playoff series win as they cruise past an over matched RSL side.