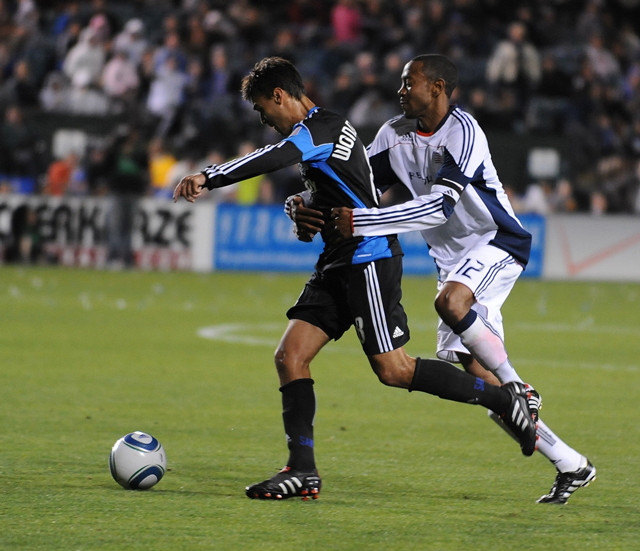 Chris Wondolowski scored a pair of goals Saturday night at Gillette Stadium to lead the San Jose Earthquakes to a 2-1 victory over the New England Revolution. Taking his season total to 14 goals, the defending MLS Golden Boot winner climbed into a tie atop the league scoring chart along side Dwayne De Rosario of DC United and Thierry Henry of the New York Red Bulls.

Wondolowski has two matches remaining this season to add to his total and potentially become only the second player in MLS history, Carlos Ruiz of the Los Angeles Galaxy being the first, to lead the league in scoring in two consecutive seasons.

The victory for San Jose was just their seventh of the season, a major reason the team will not be a part of the 2011 MLS Cup playoffs, but it did stretch the Earthquakes recent run of form to six of seven games unbeaten.

“The guys have not given up this year and they proved that tonight,” said head coach Frank Yallop after the match. “We have been playing well for a number of games, but we haven’t gotten the results. Tonight was not our best performance but we put away our chances and got a great win. I am proud of the guys.”

Wondolowski put the visitors up early with a goal in the eighth minute. Rookie goalkeeper David Bingham, making his MLS debut for the Earthquakes, spied Wondolowski sprinting into space behind a high Revolution defensive line and sent a nearly 80 yard kick right into his path. The forward took a deft touch of the ball to settle it just beyond the reach of defender Ryan Cochrane before unleashing a one-time strike past the Revs ‘keeper and inside the far post.

“I got the ball and I could just see their line leaving more and more space,” described Bingham, who earned his first MLS assist on the Wondolowski goal. “I spotted Wondo out of the corner of my eye and I hit it toward the space. He made a great run and was able to get behind their defense. It was a good finish by him.”

The Earthquakes almost doubled their lead minutes later after some fine work from midfielder Simon Dawkins put himself in position to fire a shot on goal. Unfortunately, a slight hesitation over the ball allowed the Revolution defense to recover and Dawkins found his shooting angle closed down.

As the first half wore on, New England began to take charge, especially in the battle of the central midfield, but they did little to trouble Bingham and the Earthquakes defensive four. Settling for audacious shot attempts that looked much better than they offered in actual quality, forwards Diego Fagundez and Milton Caraglio gamely pushed for an equalizing goal. However, with little in the way of significant build-up in their attacking third, the Revs went scoreless in the opening stanza, and the Earthquakes took a one goal lead into halftime.

Early in the second half, as both teams struggled to gain momentum, an incident outside the run of play brought new life to the match. Midfielder Ramiro Corrales, who was having an anonymous time of things in the center of the Earthquakes midfield formation, put in a hard challenge on Revs midfielder Benny Feilhaber that resulted in a free kick deep in San Jose territory. Able to push bodies forward, the set piece opportunity ultimately set the stage for a Revolution equalizer.

In the 55th minute, Revolution winger Ryan Guy found himself with space 25 yards from goal to send in a shot on target through a throng of Earthquakes defenders. Bingham did well to parry the ball toward the other side of the penalty area, but Caraglio sent the goalkeeper’s clearance back across the goal and off the crossbar. With the Earthquakes defense scrambling to cover for one another in the area, Feilhaber ran in untouched, save for a late lunging effort from a retreated Wondolowski, to volley the rebound into the back of the net.

For the 13th time this season, the Earthquakes had surrendered a one goal lead and allowed their opponent to equalize. The heroics from the Revolution midfielder seemed to demoralize the Earthquakes, and the match descended into a period of uninspired play by the visitors. Thrice already in 2011 the Quakes had lost when scoring first, and Saturday’s match at Gillette Stadium looked likely to add to that ignominious total.

However, the Earthquakes slowly adjusted to the play of the Revolution and started to take more control of possession. When it became clear that a hobbled Corrales would need to be substituted, Yallop had Dawkins shift from the wing into the center of midfield and dropped Wondolowski toward the left flank. The Tottenham loanee immediately took charge in his new position, and the Earthquakes fortunes turned on a dime.

In the 82nd minute, following some nice play out of the back, Dawkins received the ball from the left side and turned possession toward the right. Finding Sam Cronin overlapping into space on the right touchline, Dawkins slid the ball into the midfielder’s path. Cronin lifted a sublime cross over the area and toward the back post, where a loosely marked Wondolowski had little to do put send the ball into a wide open goal with the simplest of headers.

“He is in great form right now and back on top of the league in goals scored,” said coach Yallop about his star striker. “He started well this year and then had a bit a slow stretch, but he is finding the spaces now and putting away his chances. We know he has the ability and he is demonstrating that right now.”

The number two all-time scorer in San Jose franchise history reclaimed the lead for the Earthquakes, something the team had managed to do only twice so far in 2011 — the other match being away to DC United. All that was left to do was to see the game out, which San Jose struggled to do over the eight minutes and stoppage time remaining in the match.

In what looked to be a gilt-edged opportunity for the Revolution to pull level for the second time that evening, Caraglio conspired to miss a sitter inside the six-yard box just as the game moved into the 91st minute. A nifty give-and-go between Feilhaber and Fagundez allowed the U.S. International to get a step behind defender Justin Morrow toward the byline. Feilhaber sent the ball across the face of goal, but Caraglio could only manage to deflect the ball well wide of the far post. The Revolution would rue the Argentine’s miss, as they failed to produce a better shot on target for the remainder of stoppage time.

The 2-1 victory by the San Jose Earthquakes moved the team 10 points clear of the Western Conference cellar-dwellers Vancouver Whitecaps, and ensured that they would finish the season no lower than 16th in the MLS single table standings. With the playoffs out of reach, the remaining compelling reason for the Earthquakes to continue their recent positive run of form is to help push Wondolowski to his second straight MLS Golden Boot award.

“That would be a nice way to finish the season,” Wondolowski expressed, “but the best part about tonight was getting the win. Hopefully we can get a couple of more wins these last two games and build some momentum for next year. If I get some goals that would be great, but really I just want us to play well and get some results to finish the year on a good note.”