What started as a pet project among some friends to chronicle the extraordinary tale of an unheralded college soccer player pursuing his dream to play in the best professional league in the world became so much more than toting around a camera and filming testimonials with the people involved. In piecing together their fine documentary “Rise and Shine: The Jay DeMerit Story”, executive producers and creative forces Nick Lewis and Ranko Tutulugdzija unearthed a story that transcends sports and celebrates a fine example of the American Dream achieved. 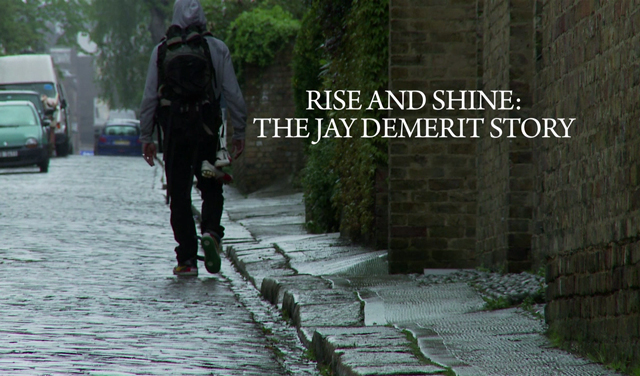 The man at the center of the story is Green Bay native and soccer player Jay DeMerit, who currently plies his trade with the Vancouver Whitecaps FC of Major League Soccer, but once was train-hopping the tracks of England in pursuit of his first professional contract. While a feast for the eyes for followers of the beautiful game, the documentary is as much about never giving up on your dreams as it is about DeMerit’s meteoric rise from Sunday pub-league games to playing in the English Premier League against some of the best players in the world.

“I’ve always been interested in the adventure side of things, and taking chances, taking risks, because the bigger risks you take, the bigger the incentive at the end. And for me, there was no bigger incentive than to play professional soccer in Europe… I thought if I could get to the pinnacle of my profession, it’s got to be in Europe, it’s got to be there, and I have to take my chance.” — Jay DeMerit

Born into a family of athletes, it didn’t take long for DeMerit to realize he could play any sport he wanted as a young kid in Green Bay, Wisconsin. Track, football, basketball, soccer — opportunities were there to excel at all of them. However, when he failed to physically develop as fast as some of his classmates upon entering high school, DeMerit decided to concentrate on varsity soccer and quickly became a local star. On the recommendation of his high school coach, the University of Illinois, Chicago took a chance on the still developing forward.

When his UIC coach asked him to switch his attention to playing defense, DeMerit quickly adapted to his new position and started to gain even more attention for his abilities on the pitch. After a spell playing with the reserve team of the local MLS side Chicago Fire, DeMerit had convinced himself he was going to be a pro upon graduating from UIC.

However, as the time approached for the MLS draft of college players, the Fire told DeMerit he was not in their plans, and the defender was left with little options to follow his dream of playing professional soccer. While the door to MLS closed, DeMerit decided to follow a fellow aspiring player, Kieren Keane, back to his native England in search of an opportunity to play.

“The first thought that comes into your head is, this is a big decision. You are giving up a lot of your life to really go for it. I’m not really the type of person who is going to do things halfway… At that time in my life, I wasn’t done; I wasn’t done with my dream of being a professional soccer player, so I had a decision to make. For me to actually take that jump into the deep end and go ‘let’s do it!’ For me there was only one choice.” — Jay DeMerit

At this point in the story, a twist on the classic buddy movie materializes, as we are treated to a series of anecdotes about DeMerit and Keane barnstorming through mainland Europe and England in search of a team that will give them a trial. With little money, but lots of perseverance, the pair shakes off the morale crushing series of rejections and eventually makes do as Sunday league players with a team at the bottom of the so-called English Soccer Pyramid. Earning a scant $60 per match, the two dreamers use Keane’s mother’s house as a sanctuary during all the uncertainty. DeMerit would look for quiet back lots in the neighborhood where he could kick the ball for hours and work on his technical skills against the fences and posts. However, when the money ran out, and with his dream fading, DeMerit returned to Wisconsin for a short spell in the offseason, still carrying the idea that he was not done in his pursuit.

After crashing with family and friends over the summer, he scrapped together enough money to make the return trip to England. He resumed playing with the semi-pro Sunday team and eventually made a name for himself in the area. On a fortuitous trial with a club higher up the pyramid in the summer of 2004, DeMerit caught the eye of the technical scouts of Championship side Watford. Offered a two week trial, along with his mate Keane, DeMerit seized the opportunity to impress at Watford and at the beginning of August was offered a one year contract to play with the second tier team. 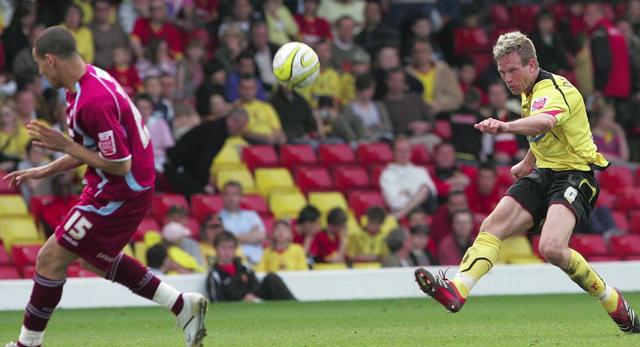 Whereas his buddy Keane had run into another roadblock in his quest to play professionally, DeMerit had defied the odds as an American player in England and made his way into the regular Watford line-up. He survived his first year with the club, and only increased his worth with a solid sophomore campaign. At the end of that season, Watford found themselves playing in the “Richest Match in the World” — a hyperbolic description for the playoff final that would award the winner with promotion to the Premiership. With his family in attendance all the way from Wisconsin, DeMerit’s unlikely career would take another leap forward that evening.

“When I saw the ball coming in, I remember looking at the ball and making sure I hit is square, and I dove in and ‘bang!’ I just remember the thud on my head and the unbelievable noise coming in. People say in those kinds of moments, you just black out, and I definitely did… I don’t remember celebrating, I don’t remember if I said anything, I don’t remember what people were saying at me, and all of a sudden I came to.” — Jay DeMerit

From an Ashley Cole corner kick, DeMerit had raced through a seam in the Leeds United defense and powered the ball into the back of the net for the game’s opening goal. It would be the first of three that Watford scored that evening in beating Leeds 3-0, and the team wildly celebrated their victory and subsequent promotion to the English Premier League. The plucky American soccer player, overlooked by his own domestic league back home, had miraculously risen to the top of his profession in England. 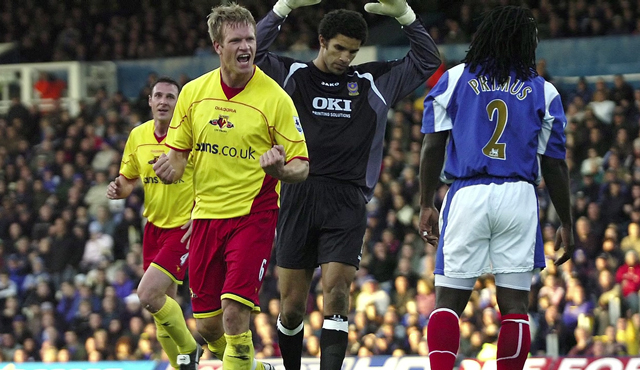 DeMerit wasn’t done there, as he helped Watford to survive their first season in the top flight, and in year two the defender was named Team Captain. A huge honor for the American, DeMerit had not only reached the pinnacle of professional soccer, but he was also a leader for his club. The testimonials given in the documentary at this point in the story served to underscore just how amazing it was for the American interloper to have achieved as much as he did. DeMerit went on to play six seasons for Watford in an amazing display of what fortitude and perseverance can help one achieve.

“It is such an unforgiving job, especially over there because there are so many people that want to play the sport; they want to be that guy and are willing to do anything to do it… When you come into a trial, you have one game, two games, 15 minutes maybe to make that impression. That one little bit of magic that might spawn something in that coach’s mind to say ‘I like him; this is somebody I’m going to take a chance on.’ And if you don’t get that in that split second or in that15 minutes of fame so to speak, then you are back on that hard road.” — Jay DeMerit

If the movie had ended there, no one would have complained. DeMerit’s ascension to the EPL and his continued success in English soccer was almost fairy-tale like in its structure, and the happily-ever-after music could have easily spewed forth. However, even though it came across as more of an epilogue, one more chapter in DeMerit’s story was still left untold. The Green Bay native dared to dream beyond the EPL — he wanted to represent his country on the United States Men’s Soccer Team.

Because this part of the story occurred concurrently with his career playing for Watford, DeMerit’s inclusion in the national team and its march to the 2010 World Cup in South Africa almost feels like another documentary in and of itself. Soccer is very much a team game, so the final 20 minutes of the film takes on less of the emotional story of DeMerit and more the rollercoaster ride of the U.S. Men’s National Team in the two-and-a-half years leading up to the World Cup. DeMerit is painted as a central figure in all the buildup, but in reality he was merely a cog in head coach Bob Bradley’s soccer playing machine. 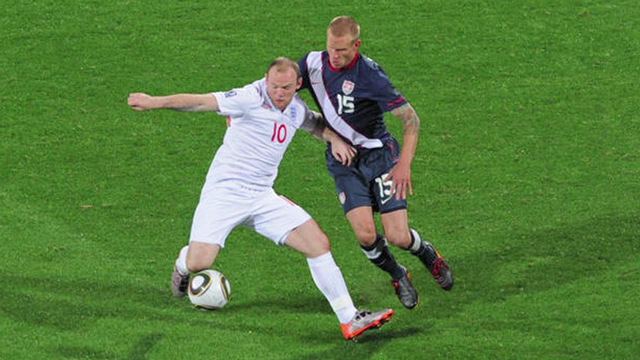 The story briefly ratchets up the emotional quotient as the now-famous Landon Donovan goal that sparked the U.S. to winning their group is highlighted, and the team is shown celebrating in the locker room after the game, but that was more a triumph of the team over the individual. Of course, DeMerit was a big contributor to his team’s success, but the pride in that victory was shared with all the players wearing the U.S. Soccer crest. Understandably it would have been difficult in the documentary to keep the focus on DeMerit during this chapter, and so instead his accomplishments become somewhat marginalized.

Where the producers rescue the film comes as the tone shifts less to the improbable career of DeMerit and more toward a celebration of soccer as a foundation for his dreams. The documentary concludes with DeMerit’s voice-over summarizing his experiences while a group of kids play the beautiful game on a dirt pitch somewhere in Africa. Perhaps through their own hard work and determination one of those children will someday tell his own Jay DeMerit Story.

“Looking back, it’s sometimes hard to fully realize all that’s happened over the years. Some people might say things like this aren’t possible, that some kid from a small town in middle America who never grew up in the system, that never kicked a soccer ball on a full-time basis until he was 24 years old, could play soccer at the highest level in Europe and one day play in the World Cup. Some people might say that I was lucky, but I don’t believe in luck. I believe… that hard work, perseverance, and a relentless belief is all you need to have that dream. Remember that the poorest person is not the person who doesn’t have a dollar, it’s the person who has given up, the person without hope, the person without a dream.” — Jay DeMerit