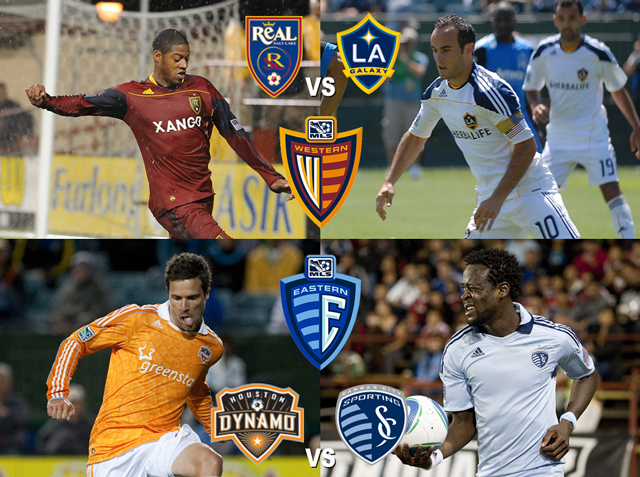 When the whistle blew to end the Los Angeles Galaxy’s 2-1 victory over the New York Red Bulls Thursday evening, the MLS Final Four was set for a pair of very interesting Conference Final matchups. The four teams — Sporting Kansas City, the Houston Dynamo, Real Salt Lake, and the Galaxy — all have MLS Cup hardware in their trophy cabinets, with RSL the most recent victors courtesy of their championship season of 2009. Houston and Los Angeles each lay claim to a pair of titles over the last decade, while Kansas City won it all back in 2000. Curiously enough, all four franchises won their championships while at the time members of the MLS Western Conference.

The West is the Best

Prior to the 2011 season, the Houston Dynamo were moved to the Eastern Conference in a realignment made necessary by the addition of two expansion teams into MLS that were both located on the west coast. At the time, the shift was seen as a godsend for Western Conference denizens Houston, as the year prior they had missed the postseason for the first time in franchise history. The move to the lesser strength east gave an otherwise average Dynamo side a fighting chance to qualify for one of the three automatic playoff bids awarded to each conference.

If still in the west, Houston would have finished sixth in the conference table and would have been forced to run the wildcard gamut to their current stand. Instead, in a playoff structure designed to handicap the wildcard teams with an extra match, all four of the Conference Final sides hail from the six automatic entrants, and the MLS Cup Final will for the first time in four years guarantee an East versus West match-up. The Dynamo have the Portland Timbers and Vancouver Whitecaps to thank for their good fortune in avoiding the 2011 wildcard curse.

In what must have become a novelty in recent MLS playoff history, the Eastern Conference Final features a clash between the top two seeds from the regular season conference standings. By virtue of their sizzling late season form, Sporting KC edged out the Dynamo for the top spot in the east and earned the right to host the penultimate match toward the MLS Cup Final. Both teams come into the match having dominated their conference semifinalist foes over their two game series, and both will look to use that momentum to their advantage in Sunday’s final.

Sporting reached the apex of the Eastern Conference courtesy of a multipronged attacking unit and a solid defensive core. Eschewing the standard 4-4-2 that many MLS teams employ, SKC instead choose to go with a more attack-minded 4-3-3 in the 2011 season. Spearheading the forward crew is striker Teal Bunbury, while Omar Bravo and Kei Kamara flank the forward line on the left and right respectively. Probable MLS Rookie of the Year C.J. Sapong has at times this season spelled all three players in the starting line-up for Kansas City, and has proven to be an effective substitute for head coach Peter Vermes. Together, the four players have amassed a cumulative 35 goals in 2011, which accounts for nearly two thirds of the team’s total goals this season.

Meanwhile, the Houston Dynamo come into the contest riding the MVP-level season of midfielder Brad Davis. The MLS leader in assists this year, and a double-digits assists man the past three seasons, Davis already has two goals created in this postseason. Both from set piece deliveries, Davis is the epitome of an MVP candidate, having carried his team to the playoffs in an otherwise average year for the rest of his teammates.

The “x-factor” in the Eastern Conference Final has to be the play of both goalkeepers. The Dynamo’s Tally Hall has put together a stellar season and helped the Houston faithful quickly forget the legendary Pat Onstad’s departure to DC United to join their coaching ranks. In the first leg of their conference semifinal series with the Philadelphia Union, Hall was crucial in allowing his team to return home to Houston with a 2-1 lead in the series by virtue of his goalkeeping heroics at PPL Park.

Standing between the posts for Sporting Kansas City is veteran ‘keeper Jimmy Nielsen. The Danish native — known as the “White Puma” for his shocking pale blond hair — is in his second year with SKC, and has steadied a defensive unit that has had its fair share of disappointment in recent seasons. In 2011, with central defensive pair Aurélien Collin and Matt Besler in front of him, Nielsen has been instrumental in helping his squad to the top spot in the east.

Prediction: The Dynamo are not intimidated by the “Blue Hell” of LIVESTRONG Sporting Park and win 2-1 to earn their third MLS Cup Final appearance in six seasons.

This will be a battle of the midfields, with Kyle Beckerman and Javier Morales of Real Salt Lake having a slight edge over Juninho and David Beckham of the Los Angeles Galaxy. However, any advantage to RSL on the field will be more than made up for by the Galaxy being the home team in this winner-take-all Western Conference Final. Los Angeles has not lost at The Home Depot Center in 2011, and will run that great run of form out against a determined Real Salt Lake side.

Prediction: The match makes it to extra time, but unlike the 2009 MLS Cup Final, where Real Salt Lake eventually prevailed on penalty kicks, Landon Donovan finds a way to earn the victory for the Galaxy.