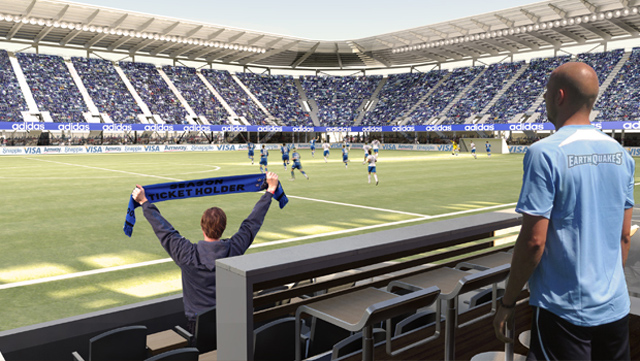 (San Jose, CA) In a well-attended City of San José Planning Director’s Hearing meeting Wednesday morning in the city council chambers, the planned development permit sought by the San Jose Earthquakes in support of their proposed new stadium was approved.

Before the Earthquakes organization can go forth and announce plans for the new project, a ten-day appeal period must pass without action. Following that time, today’s approval of the use permit will allow the team to finalize detailed architectural plans for the long desired new home for the Earthquakes project and to file them with the City. Up to this point in the process the Earthquakes have waited on approval of the parameters stated in the permit before expanding on the general plans that have already been made public for the proposed 18,000 seat stadium.

Listed as item #2B on the agenda, the permit received a great deal of attention during the meeting, as supporters for and against the project voiced their opinions to the planning director’s staff. Various complaints of inadequate noise-level studies and possible compliance contradictions with the safety polices of neighboring Mineta San José International Airport were offered by opponents of the new stadium, while stories and anecdotes illustrating the importance of the Earthquakes organization to the community were shared by supporters of the new facility.

Following the public comments, the planning director’s staff addressed the various complaints that were brought forth and gave explanations that all issues were addressed prior to the morning’s meeting. Satisfied with the findings of the staff, the Planning Director approved the staff’s recommendations and approved the permit.

The planned development permit granted to the Earthquakes organization must pass one additional hurdle before the organization is allowed to proceed with filing architectural drawings with the City of San José. By city procedures, appeals can be made of the Director’s decision over the next ten business days, as long as they pertain to issues brought up in this morning’s meeting.

In the event that an appeal is filed and approved by the Planning Director, the process shifts back to the City’s Planning Commission, which at its next meeting would give a yes or no vote on the appeal. The length of that process is unknown, but the hope among some with the organization is that the issues some neighbors may have with the new stadium project have now been fully addressed by City staff.

The process to this point involving the planned development permit began earlier this year and has involved numerous meetings with City officials and local residents. Compromises on potential uses for the facility — the latest move was for the Earthquakes to cede the opportunity to host music concerts at the stadium — and some general design changes to the original concept presented to the public back in 2009 have been made in a good-faith effort to minimize the noise impact of events at the facility on the surrounding neighborhoods.

Understandably, some local citizens could only imagine the worst if the project was allowed to move forward, and the Earthquakes put a great deal of effort into ameliorating their concerns. The parameters of the latest version of the planned development permit, now approved by the Planning Director, should act to minimize the impact of the project to those living in the vicinity, while still allowing for the Earthquakes to build a much-needed modern home stadium.