Share All sharing options for: San José Earthquakes 2012 Pre-Season and a Look at Pre-Seasons Past 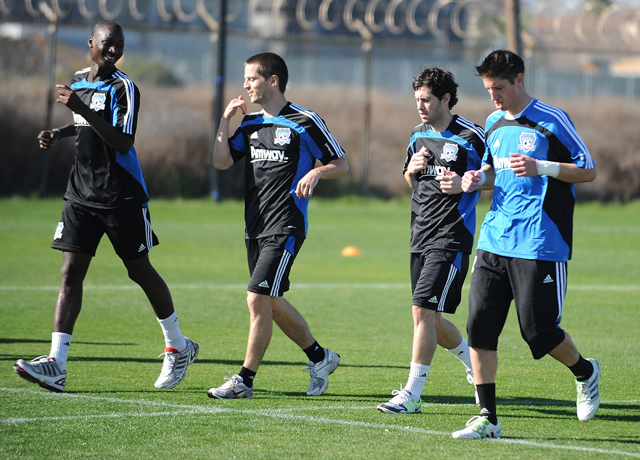 To understand the present, we must often look to the past. Today, the San José Earthquakes have released their pre-season agenda for the upcoming 2012 season. As MLS fans eagerly await for March 10, 2012, it is nice to see that in less than a month most training camps around the league will be open in hopes to find the keys that lead to the elusive MLS Cup.

With this goal in mind, San José has announced that they will be spending this year entirely in the United States instead of heading abroad to visit their partner club Tottenham Hotspur in London, UK. Perhaps giving up their chance to train at Spurs Lodge, in order to play other conference clubs will pay off more dividends this year. In doing so, the Quakes will not have to deal with jet lag and long plane rides, but rather they can focus on getting fit and beating other Western Conference teams. (To note, the Quakes record at Spurs Lodge has been very impressive 5-1-0 beating Birmingham City Reserves (2011), Colchester United (2011), West Ham United XI (2010), Tottenham XI (2010), Colorado Rapids (2010) and losing to Leicester City in 2011.)

However, the big question is: what is in store for the Earthquakes this pre-season? The Quakes camp opens up on January 15, 2012 for training through January 29 at the Nutrilite Training Facility. In years past, these first weeks have been more fitness drills rather than full time on the ball; it will be interesting to see if the Quakes will go back to that style or choose to work on practice drills. (Of note, during this time, there will be the 2012 Earthquakes Open Tryouts for males age 18 or older on January 22 at Danville’s Mustang Soccer Complex.)

On January 30, the San José Earthquakes’ coaching staff and players will make their way to Kino Sports Complex in Tucson, Arizona where they will overlap one day with the New England Revolution at the facility. It will be interesting to see if a pick up match is scheduled between the two teams on this day.  Although, no other MLS team has yet announced that they will be in Tucson at the same time as the Quakes; it is certain that San José will be able to find some teams to challenge in the warm desert sun. The Earthquakes will be using the Kino facility until February 4, when they fly back to Santa Clara for more training time at their Nutrilite training pitch.

February 15 will be the day that the Quakes will show up at Oxnard Community College in Ventura, California. Here the Earthquakes will train until Thursday, February 23. It will be compelling to see if they meet up and challenge Bobby Burling’s new team the expansion Montréal Impact who will be in Los Angeles until February 18. In years past while training in Ventura, San José has tied the LA Galaxy (2011), while beating Chivas USA (2009 & 2011), Ventura County Fusion (2011), and the Colorado Rapids (2009).

After hanging out in the Southern California sun, the Quakes will come back North to Santa Clara for three more days at their Nutrilite Training Facility.  For the past three years, the San José Earthquakes normally play the Cal Berkley Men’s team and USL Premier Development Leauge’s Fresno Fuego in order to check out trialists before their full season begins. It will be interesting to see if the Quakes will schedule one of these matches before heading up to play in the rain in Portland, Oregon.

While in Portland, the Earthquakes will partake in the Portland Timbers Tournament from February 27 - March 4. This is a four team tournament between Chivas USA, Portland Timbers, AIK (Sweden) and the San José Earthquakes. The Quakes will start off on Monday night (7:30p) playing the Timbers, followed by AIK on Thursday evening (5p), and ending with Chivas USA on Sunday afternoon (2:30p). Tickets will go on sale Feb. 6 at 10am on Ticketmaster for $10. For the past four pre-seasons, the Earthquakes have played the Portland Timbers winning in 2008 and 2009, while drawing the last two years.

Finally, on March 5, the Quakes will find themselves making their way back to the Bay Area in order to get ready for their Saturday (March 10) evening home opener between one of the following teams: Real Salt Lake, New England Revolution, Chicago Fire, Sporting Kansas City, Columbus Crew, or Toronto FC (the opponent will be announced at a later time).

All in all, every San José Earthquakes fan is hoping for an amazing pre-season run followed by a 2012 season where the Quakes achieve that ultimate goal of winning another MLS Cup.