Throughout my carefree, formative years skipping up and down the hills of Lancashire, many observed that I was a child with my head in the clouds.  I was easily distracted by shiny new conkers, fizzy flying-saucer sweets, and kids wearing new soccer shirts.  Even now, I am just as easily distracted (by shiny cars, food trucks and kids wearing new soccer shirts) and those observers would be shaking their heads at the equivalency of my adult life.

Today I found out what the cloud in my head looks like.  On this occasion I was distracted by Wordle, which generates word clouds from text that you enter into its web site. The more frequently a word is used in a piece of text, the bigger the word appears in the image that Wordle generates. Naturally, my first thought was to evaluate my Centerline and Mirthquakes blogs, and with just a few clicks of the mouse I tweaked my final image with a Quake-centric color scheme.  It’s been intriguing to visualize what the inside of my head looks like when it's transcribed onto the page. 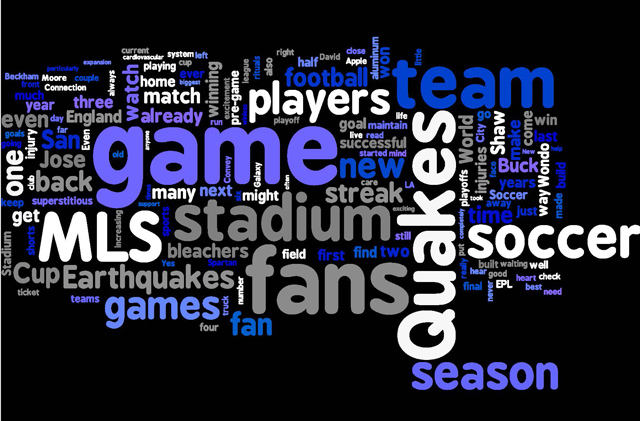 The biggest word, and therefore the word I’ve written down most is game; it’s right there in the middle where the centre line would be.  The size and location of the word pleases me.  The word game implies recreation - Wiktionary shows that the word originates from Old English gamen meaning: sport, joy, mirth, pastime - and I’m most definitely a fan of mirth.  The words Quakes and fans are just a tiny bit smaller, which also make me happy as my intent has always been to rattle on about the exploits of the Quakes fans, and I take their prominence as a sign I am on the right lines.  The words MLS, soccer, team and (of course) stadium are all generously sized - Quakes fans all want the word stadium to be the biggest word should I repeat this exercise in 2012.  It would be a truly successful season if stadium were accompanied by the equally sized words playoffs, cup, and winning, and injuries were in a smaller font.  Finally, I noted with relief that Wondo is written larger than Beckham – even though it’s doubtful that the Castrol Index has been worked into the Wordle algorithm.

So, if there’s a take home message it’s: Quakes team and fans really want a new stadium for their MLS games - which also sums up what I want for Christmas this year.