San Jose Earthquakes getting into the swing of preseason training

Share All sharing options for: San Jose Earthquakes getting into the swing of preseason training 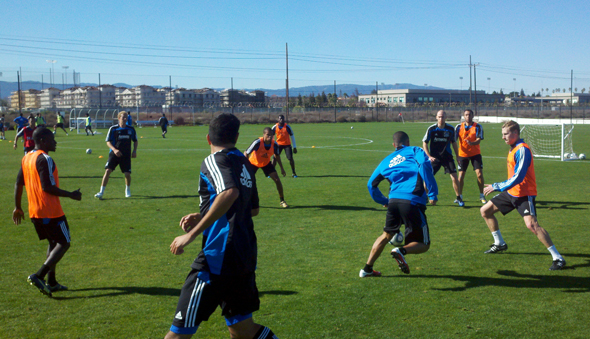 While the eastern third of the country prepares for yet another powerful winter storm, the month of February in the Bay Area kicks off with yet another beautiful sunshiny day. And taking full advantage of the mild temperatures are the San Jose Earthquakes, as they continued week two of their preseason training at the Nutrilite Training Facility Tuesday morning. While it this time last year in the schedule the team was still focusing on fitness drills, Head Coach Frank Yallop and his staff have the players breaking out into small groups to work on ball skills and drills.

When training camp began last week, Yallop stressed that he wanted to push his squad to achieving optimum fitness for the start of the season and beyond. He cited 2010 as a good year for the club as far as avoiding too many devastating injuries, but still saw room for improvement in 2011. Looking out across the expanse of the practice field, all but two of the rostered players were participating fully in training. As described previously, Andre Luiz continued his rehabilitation under the watchful eye of Head Trainer Bruce Morgan with an eye to a complete recovery in the next 6-8 weeks. Also at the NTF, though still in street clothes was forward Scott Sealy, who is still recovering from off-season surgery to repair a leg injury from the previous season. He will be held out of regular training for at least two more weeks according to Yallop.

An encouraging site on the day was the play of incumbent left back and team leader Ramiro Corrales. After dealing with injuries over the second half of 2010, the 16-year pro pronounced himself at full fitness and ready for the new year. When Corrales was at 100% last season and partnering with left side midfielder Bobby Convey, the Earthquakes played some of their most complete soccer of the season. Yallop will look to have him healthy again, which will allow him to move defender Tim Ward over to his more natural side on the right.

Sunshine splashed down on the Nutrilite Training Facility in San Jose as the Earthquakes broke into small-sided scrimmages. Photo: Robert Jonas, centerlinesoccer.com.

Lots of new faces were decked out in Earthquakes blue and black on Tuesday, with four more trialists in camp attempting to make the squad. No formal announcements have been made on the trialists, but the four all are primarily attacking players. Two of those that were identified on Tuesday were striker Andrew Ornoch, a Canadian International free agent, and forward Ellis McLoughlin, a former U.S. U17 player that trialed last summer with Seattle. They will need to make an impression very soon on the coaching staff however, as Yallop revealed he will not be carrying such a large group of players deep into preseason training.

“I’m going to make some early decisions in the preseason,” said Yallop. “I want to clean up the roster as soon as possible so we don’t have players just hanging on, and rather they know what is going to happen.” 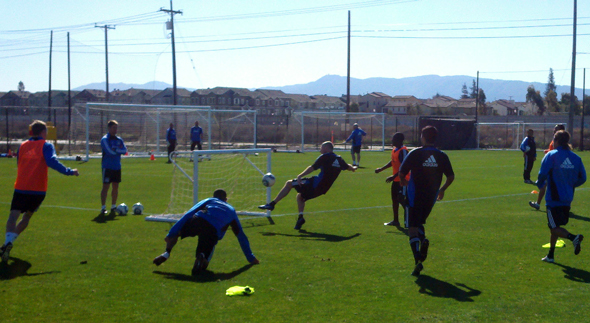 Having revealed that he will carry three goalkeepers on his 30 man roster, as MLS rules now require, Yallop stated the competition to make the team has been going well, but is far from being decided. All five candidates for ‘keeper are still in camp, with realistically one spot available for the three candidates Andrew Weber, Brian Edwards, and Philip Tuttle — Jon Busch and David Bingham look safe bets to be in the final three. While admitting he hasn’t directly worked with the ‘keepers thus far in preseason — that responsibility sits with goalkeeper coach Jason Batty — Yallop did say that an increasing regimen of scrimmages will give him a better evaluation of the candidates.

A player that hasn’t been able to train with the team on a full time basis to this point was Supplemental Draft choice Victor Cortez. The USF midfielder will be splitting time between the Quakes and school, and the hope is that he can join the team 2-3 days a week for training. That’s not the case for the other draft picks Anthony Ampaipitakwong and Philip Tuttle. Both have been in San Jose from Day #1, with Ampai getting significant time in the intrasquad scrimmages. 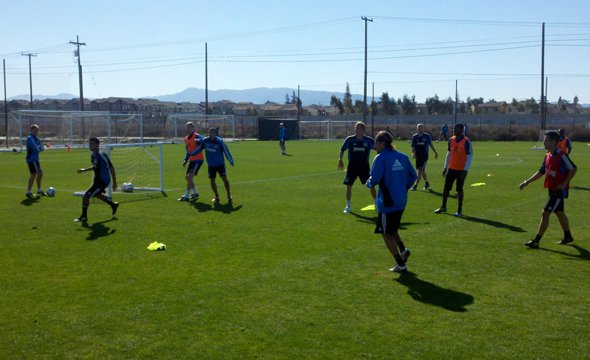 Speaking of the Akron midfielder, he showed off his skill at the #10 position during Tuesday’s session, where he was asked to play that role for both sides in the scrimmage. Some crafty passing mixed in with the occasional opportunistic shot on goal was the report on Ampai, who quickly looks to be settling in with his teammates. While it still appears he has some adjusting to do, especially when it comes to dealing with larger, more aggressive defenders than he might have seen in college, Ampai shows the raw talent and skill to press for playing time with the senior team come the regular season.

Another exciting young player, but one familiar to most Quakes fans from his electric debut in last season’s U.S. Open Cup play-in match with Real Salt Lake, is midfielder Omar Jasseh. Singled out by Coach Yallop as a player to watch for 2011, the Gambian speedster still needs to hone his raw skills to the professional game.

“Omar needs to start doing the work that can get him in to the starting line-up and not continue to be a project,” revealed Yallop. “He needs to step up on everything at this point. He has ability, but he needs to understand the game more tactically and technically so he can get on the field.” 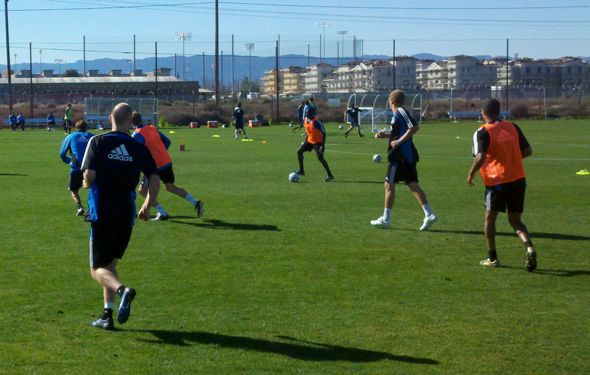 Lastly, newly acquired forward Steven Lenhart continued to impress during short-sided scrimmages. While not always the most deft with his touch, the towering striker used his body well to gain possession, and create space to distribute the ball. His shots on goal also signaled his finishing ability and promised more to come as the regular season draws closer. Yallop remains very high on the ex-Crew forward, and knows he is capable of a breakout year in 2011.