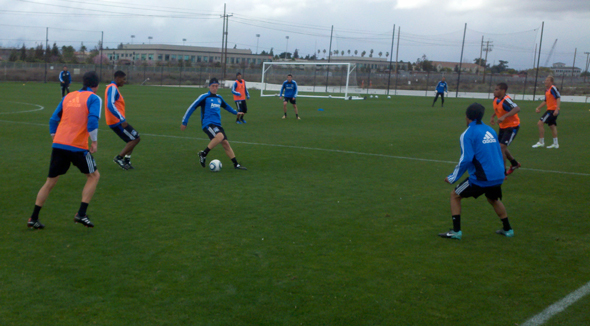 The San Jose Earthquakes returned from a training stint in Ventura for an abbreviated local stay that will see them practice at the NTF Monday and Tuesday. On Thursday the club travels to England to train at the grounds of Tottenham Hotspur for just over a week. With just two days of practice, the sessions were expected to be rigorous, and will include a scrimmage against the University of California Men’s Soccer team.

Monday’s session saw the Earthquakes spending considerable time on fitness drills in the first half, followed by a 10 v. 10 scrimmage to close out the day. Newly signed midfielder Khari Stephenson was back with the club for the first time following the conclusion of the 2010 season. With both he and the team’s coaching staff wanting to see him return to the Quakes following last year’s loan from Norwegian club Aalesunds FK, General Manager John Doyle, Stephenson’s agent, and the club in Norway worked feverously to make a permanent transfer to MLS a reality. With the official announcement by the team and league that Stephenson would be with the Quakes in 2011, a key component to their successful run to the 2010 postseason is secured.

In just his first training session with the Earthquakes Stephenson looked right at home playing with the first teamers in the 10 v. 10 scrimmage. The lanky Jamaican appears to be in excellent health and showed no signs of the muscle strain injury that slowed him down at the conclusion of the 2010 season. Stephenson confirmed after practice that he has been working out in anticipation of making his move to the Earthquakes permanent, and is very happy to finally be reunited with his teammates.

The scrimmage was a contested on a abbreviated field measuring from the top of each penalty box, ensuring that the play in central midfield would be key to gaining and holding possession. With Stephenson running the first team, Anthony Ampaipitakwong captained the second team. Ampai appeared to be adjusting nicely to the style of play favored by Coach Frank Yallop, and initiated numerous forays into the attacking end. Helped by Brad Ring in the center, with Joey Gjertsen and trialist Rafael Baca on the wings, the second team midfield did well to pressure the first team defense and help create opportunities for a forward trialist that remains unnamed at this time. Using speed and counterattacking possession, the second team struck for 3 goals in the first half of the scrimmage, while holding the first teamers scoreless.

The second half was more even, with the only scoring coming from a vintage Chris Wondolowski one-time finish that goalkeeper Jon Busch could do nothing to stop. With Bobby Convey, Jason Hernandez, and Ramiro Corrales all sitting out the scrimmage to rest injuries that did not need the test of full-speed play, Omar Jasseh and Ike Opara settled in nicely with the usual suspects. Jasseh again showed off his shooting skills, but at times seemed to forget his responsibility to find Steven Lenhart and Ryan Johnson in the area with crossing passes. Sam Cronin looked solid as the defensive central midfielder, continuing a preseason training at a high level of performance after fully recuperating from a January injury suffered at National Team camp.

Joining the trio of starters on the sidelines for the scrimmage were Scott Sealy and trialist Ellis McLoughlin. Sealy was finally in training gear for the first time this preseason, but he is still weeks away from joining in any full-speed ball drills. He spent the session focusing on fitness drills instead. McLoughlin, who is expected to join the team pending completion of his contract negotiations, was nursing a knock to the ankle experienced earlier in the day, but did not appear to be suffering any significant injury. The former U.S. National Team U-17 striker is expected to provide some depth at the forward position, but will need to progress significantly if he wants to earn playing time with the first team.

Following the conclusion of the training session, GM John Doyle indicated that the team roster is nearly set for the start of the 2011 season. Stephenson was the last major signing the team expected to make, while the imminent signings of Ampaipitakwong, McLoughlin, and Baca will fill out some of the off-budget roster spots. When asked if he has plans to sign up the maximum of 30 players allowed, Doyle suggested that would not be necessary and having the open spots would give him flexibility as the season progressed to add new players. Given the 3-year history of summer signings by the Earthquakes, that pattern should continue in 2011. And with a great deal of room under the salary cap projected for this season, Doyle should not be limited by budgetary concerns when the time comes to make those additions.