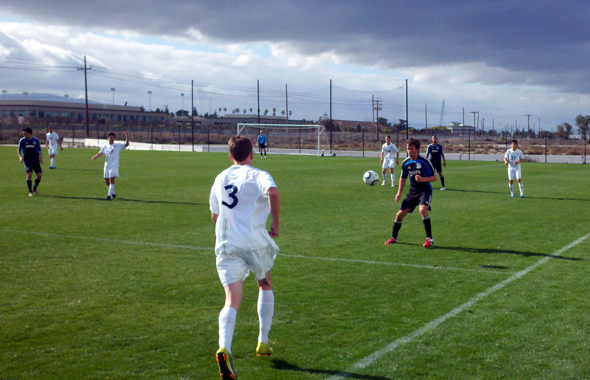 Under threatening skies Tuesday afternoon at the Nutrilite Training Facility, the San Jose Earthquakes defeated the California Golden Bears 4-0 in a preseason scrimmage. On an Earthquakes side made up primarily of reserve players, striker Chris Wondolowski scored the game winner, while two trialist hopefuls accounted for the following three tallies. The Golden Bears registered just two shots on goal and never really threatened to score in a match dominated by the Quakes.

“We did very well moving the ball and possessing it and at the right times going forward,” surveyed rookie midfielder Anthony Ampaipitakwong after playing the full 90 minutes in the victory. “Getting the four goals and being solid in the back was a good confidence booster for this team.”

With the majority of first team players for the Quakes already departed for the day after a morning-long training session, Wondolowski remained with a cadre of second teamers and guest players to take on a California squad that was still dealing with the loss of six players to Major League Soccer. From those losses included a player familiar to fans of both teams, goalkeeper David Bingham, who joined the Earthquakes after a special allocation lottery and played between the posts in the second half of the match against his college team. While Cal head coach Kevin Grimes will welcome eight new recruits to a team that lost in the NCAA College Cup quarterfinals last season, his roster was threadbare at the loss of so many quality players to the professional ranks.

Still, Cal stayed close to the Earthquakes over the game’s first twenty minutes. Omar Jasseh started strong for the Quakes, as his darting sideline runs stretched the Golden Bears defense, and in the 8th minute he nearly picked out expected signing Rafael Baca with a low cross to the top of the six-yard box. Also just missing the cross on the play was an as-yet-to-be-named trialist that was lined up as the lone striker in head coach Frank Yallop’s 4-3-2-1 formation. Said trialist had a great chance to take the lead for the Quakes in the 19th minute, as he wheeled around at the top of the area with space to shoot, but he elected to attempt a through pass to an onrushing Jasseh that was snuffed out by the Cal defense.

As the first half progressed past the halfway point, the Earthquakes were asserting their dominance on both sides of the ball. With Jasseh and Baca running the wings, and Wondolowski, Ampaipitakwong, and Tony Donatelli stationed in central midfield, the Quakes were finding easy passage into the attacking third at all points of attack. As is often the case in Yallop’s tactics, the wingers would switch sides of the field periodically, and both wingers showed promise in serving crosses into the attacking area. In the 23rd minute, Wondo had his first shot on goal, but a loose plant foot conspired to weaken his attempt and the ball rolled harmlessly to the Cal ‘keeper.

Two minutes later, with the ball being worked up the left wing by defender Steven Beitashour, the Quakes frontmen rushed the penalty area in anticipation of a crossing pass. When Beitashour laid the ball off to Baca running toward the byline, the defenders collapsed in front of goal, leaving a wide open Donatelli at the top of the area. Baca picked out the former Montreal Impact star with a low pass, and Donatelli tested the ‘keeper with a fine shot on goal.

With the Earthquakes possessing the ball for the majority of time, goalkeeper Andrew Weber and the defensive four were pressured infrequently by a Cal team forced to compact their formation in their own half of the field. Just once was Weber called into emergency action, as he expertly rushed out to thwart a Cal break and make a sliding takeaway at the edge of the area. Central defensive pair Bobby Burling and Justin Morrow played comfortable soccer in the back and linked well with Ampai in the middle and the two wingers outside with any regaining of possession. While unusual for him in normal match situations, Brad Ring played as a right back on the afternoon and showed some nice work both in defense and as a provider on attack down the right side.

With momentum clearly in favor of San Jose, Wondolowski finally broke the scoreless tie with a smooth finish in the 40th minute. After a failed Quakes foray into the area just moments before, the Cal defense tried to work the ball down the right touchline and out of danger. However, a brilliant steal from Baca left the defender lurching behind and he sprinted with the ball toward the byline. Turning into the area, and with the Cal defender trying to cut off the angle, Baca squared the ball through the Cal defense to the top of the area for an onrushing Wondo to blast home from 15 yards out.

Smelling blood, the Earthquakes nearly doubled their lead twice in the waning minutes of the first half. In the 42nd minute, Baca brought the ball across the top of the area and passed to the right edge of the area for Jasseh. The Gambian took on a defender with an array of moves before unleashing a shot from a tight angle that clanged off the post for a goal kick. Two minutes later, Jasseh returned the favor with a fine dribble penetration into the area and pass off to Baca. However, instead of taking the shot, he lofted a cross to the far post where Ampaipitakwong, with a defender draped over him, volleyed his shot just over the crossbar. Within seconds of the Earthquakes offensive flurry, the halftime whistle was sounded and the teams took a well deserved quarter hour break with San Jose holding a 1-0 lead.

The start of the second half saw two changes for the Earthquakes. Rookie goalkeeper and Cal product David Bingham entered the game between the posts, while 2010 Golden Boot hero Wondolowski was spelled by local guest player Matt Fondy, a senior from U.C. Santa Cruz. Wondo did very well in the first half, where he netted the goal and helped keep possession with central midfield work that saw him drift all the way back to the defensive line. Playing the majority of the half as a withdrawn forward, he did well supporting the trialist striker while still finding opportunities for shots on goal.

Picking up where they left off at the conclusion of the first half, the Earthquakes continued their assault on the Golden Bears defense. In the 48th minute, Ring took possession deep down the right touchline before cutting the ball back toward the middle of the field. Baca found space at the top of the area and fed a perfectly weighted through ball to the trialist striker, who was denied by the Cal goalkeeper a sure goal. Playing in line with the Cal defenders all afternoon, the trailist striker tried to make up for a lack of breakthrough speed with good positioning for crosses and through balls into the attacking third.

In the 54th minute, the Earthquakes doubled their lead after an extended spell of possession saw them slowly compact the Cal defense into their area. Swinging the ball from the attacking right corner following a cleared corner kick, Ring passed back to Morrow just inside the Cal half of the field. The central defender sent a long ball toward the area that found Burling 15 yards from goal. Instead of taking the shot, Burling flicked the ball to the left wing where Baca collected and delivered a nice left-footed cross in the six-yard box. The trialist striker rose up to meet the ball between two defenders and direct the ball into the back of the net for a 2-0 lead.

The Golden Bears nearly answered less than a minute later, as they surged forward following the restart. However, an ever alert Bingham was able to disrupt a scuffed shot on goal and recover in time to deflect the return shot to safety. The sequence proved to be the closest Cal would come to scoring in the second half, and also gave Bingham is only real challenge of the day.

In the 68th minute, Baca turned from provider to goal scorer after he found himself 18 yards from goal with the ball at his foot. He and Donatelli had exchanged passing leading up to the goal, and Donatelli took the first crack at frame but had his shot deflected by a defender. From that loose ball, Baca took a touch to steady himself before putting a right-footed shot over the goalkeeper and just inside the far post for the third goal of the game.

The next 15 minutes of the match saw the Earthquakes hold the majority of possession but not create much in the way of scoring opportunities. With Baca moved inside from the wing and Ampai and Donatelli completing the midfield triangle, the Earthquakes seemed content to hold the ball without venturing too deep into the Cal half. Comfortably ahead 3-0, the Quakes looked comfortable letting the pace of the game diminish while looking for low-risk opportunities to take the ball forward.

In the 83rd minute, with Beitashour finding plenty of space down the left side of the field, the Earthquakes struck for goal number four. Getting the feed from Jasseh, Beitashour took the ball to the limits of the byline before sending a low cross into the area. Caught between going for the ball with head or with foot, the trialist striker went prone to knock the ball past the goalkeeper with a simple header.

Five minutes later, the trialist striker should have earned a hat-trick on the afternoon, but his one-on-one with the goalkeeper was expertly saved. Following a break from the back, Ampaipitakwong took the ball at the half way line and spotted the trialist striker making a run behind the defense. Ampai sent the ball just out of the defender’s reach and right in the path of the trialist striker. With just the ‘keeper to beat, he sent the shot low and to the right, but was foiled by the nice save.

“It was good to have this chance to develop some chemistry with the guys,” said Ampaipitakwong when asked to assess the day’s performance. “It felt good out there to have the guys trust me in the center of the field.”

One last gasp effort from Cal to get on the scoreboard went lacking in the final minute as a cross from the left corner found a Cal midfielder with space at the left edge of the area, but he blasted a shot well over the target, and the final whistle was sounded. Even though Cal couldn’t measure up to San Jose on the afternoon, the match was a good test and training exercise for the Earthquakes reserves, and a great opportunity for the coaching staff to evaluate players that may be called upon during the upcoming MLS regular season.