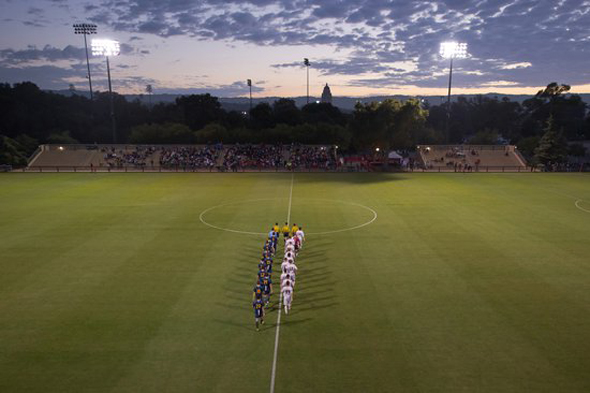 The San Jose Earthquakes will visit Cagan Stadium on the Stanford University campus to take on the Cardinal men's soccer team in an exhibition April 19, 2011. Photo: Stanford Men's Soccer

Following up on their beat down of the California men’s soccer team this week, the San Jose Earthquakes will give the Golden Bears’ Bay Area rival Stanford University a chance to take on their ranks in an exhibition match scheduled for April 19th. In a statement released by the Stanford athletics department, head coach Bret Simon announced that the Cardinal will face the Earthquakes on that Monday night at 7:00 p.m. at Cagan Stadium on the Stanford campus. One of five matches on the Cardinal spring schedule, the exhibition with San Jose is expected to be a stern test for a Stanford side which will lose seven seniors, including MLS draftees Bobby Warshaw and Ryan Thomas.

While not unusual for the Earthquakes to schedule exhibition matches with local clubs in their preseason, the April 19th match occurs during the regular season and on the heels of an away match at the New York Red Bulls on April 16th. With expanded rosters and the return of a limited Reserve League, the Stanford friendly should provide an additional opportunity for players not with the Earthquakes first team to get some action with an outside opponent. Much like in the match earlier this week with California, expect a line-up of reserves and guest players for the Cardinal tilt, as the traveling squad will likely sit the exhibition out in preparation of a league home match April 23rd against Chivas USA.

UPDATE 04/06/2011: The scrimmage with Stanford has been moved back a day to Tuesday, April 19th with a new starting time of 7 p.m. according to the Stanford Athletics website. This schedule change was confirmed by the San Jose Earthquakes.