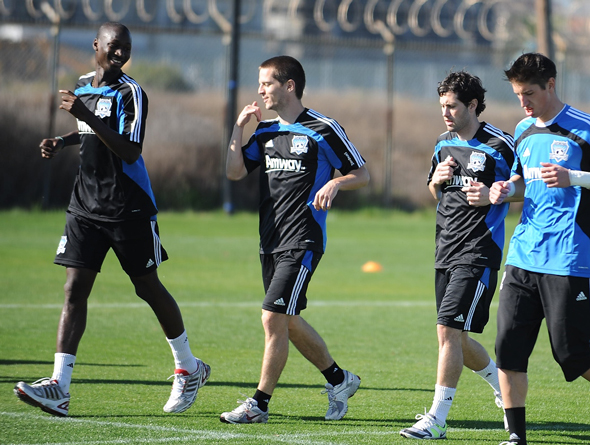 At this time a year ago, midfielder Sam Cronin arrived for preseason camp with Toronto FC and began preparing for his sophomore season in Major League Soccer. Coming off a solid rookie season where he played 27 games, with 26 starts, while also taking time off to play in the Gold Cup with the U.S. Men’s National Team, Cronin had expected to take that next step forward as a professional soccer player.

However, a new coaching staff led by hard-nosed Head Coach Preki, seemed to have other ideas for the defensive midfielder, and he began the regular season riding the substitutes’ bench. In what many predicted would be a breakout season for the then 23 year old started out more like a nightmare. As the MLS calendar arrived at its World Cup break in mid-June, Cronin had made just 4 starts for the Reds and was rumored to be on the trading block.

At that same time the San Jose Earthquakes were struggling to find consistency in their midfield and jumped at the chance to bring in Cronin in an attempt to shore up the defensive midfielder role. When all it took was allocation money to sway Toronto into sending Cronin to the Bay Area, General Manager John Doyle did not hesitate to pull the trigger on the midseason trade.

“Sam is a good, young player who had a big impact in the league as a rookie in 2009,” said Doyle shortly after the trade was completed. “He is a two-way midfielder that should fit in nicely with our team here.”

Following the move to San Jose, Cronin quickly found favor with Head Coach Frank Yallop and ensconced himself in the starting line-up immediately. He would go on to make 20 appearances and 19 starts for the Earthquakes over the remainder of the regular season and the playoffs. While Cronin failed to find the back of the net or assist on a goal during that stretch, he excelled at his primary role in support of the defensive four. Yallop recognized that Cronin’s contributions to the team’s success went beyond his stat line.

“Sam was ready to go from the moment he arrived with us,” said Yallop when asked to look back on Cronin’s 2010 campaign. “He was an important player for us in making it to the playoffs.”

Cronin himself was very happy to be traded away from a difficult situation in Toronto to a program in San Jose that appeared to be headed in the right direction.

“If anything if proves that it was a good move for me personally,” said Cronin. “I was very fortunate to get here and play right away, it was great. The move to the Quakes was good for me individually and hopefully I can continue to develop this year.”

For many players making a midseason change in teams can involve many weeks of adjustment to new tactics, new teammates, and new coaching styles. But for Cronin, his introduction to the Earthquakes went off without a hitch. Entering training camp ahead of the 2011 season should help Cronin take that next step forward as a central midfield leader.

“I still see myself in a position where I have to prove myself,” revealed Cronin. “I was only here for just under half the season so until you really get a full season under your belt, I still feel as if I have a lot to prove. But I’m really looking forward to having the full preseason here to keep getting better and more comfortable with my role with the team.”

In a 2010 season that saw forward Chris Wondolowski steal all the headlines, and subsequently earn an invitation to the annual winter U.S. Men’s National Team training camp, Cronin proved he too was worthy of consideration for that honor. While not on the National Team radar in the lead-up to the 2010 World Cup, Cronin did have experience in the 2009 Gold Cup, and he showed Head Coach Bob Bradley that he was ready for another shot at representing his country. While a mild injury suffered in January’s camp prevented him from playing in the month ending match with Chile, Cronin walked away with some valuable lessons he hopes to implement in the coming season.

“I still have work to do, I’m a long way from where I want to be,” said Cronin modestly. “The speed of play there is a tad bit faster, even though it is mostly MLS guys there. It is nothing I am not too unfamiliar with. Hopefully I can continue to improve, and see enough that I am comfortable and confident at that level. That’s the goal obviously.”

Still, Cronin did reveal a disappointment at not getting a chance to earn his third cap with the National Team.

“It was tough to miss the game,” Cronin continued, “because the whole point of the camp is to obviously get some good training in. But the goal, the carrot, the reward is at the end — to not be able to play in that was not fun. At least I got some good training in, and I’m feeling healthier now than I was a week ago, so that’s good.

Being healthy again is foremost on Cronin’s mind entering the preseason, but he intends to fully regain his fitness before trying too hard in training. By the end of the first week of camp, he was already practicing at full strength and speed, suggesting that his fitness regimen was back on track.

“(The USMNT camp) was good for our guys are fine,” assessed Yallop. “It was only three weeks, and I don’t think it was an overly taxing camp. It put Sam ahead fitness-wise, and he should be able to overcome his slight injury in no time.”

With the regular season opener just six weeks away, Cronin already looks ready for the challenge of playing his first complete season for San Jose. And entering his third professional season, the time is right for him to advance his name into the highest tier of MLS defensive midfielders. Accomplish that goal, and the Earthquakes will again be contenders for the postseason.