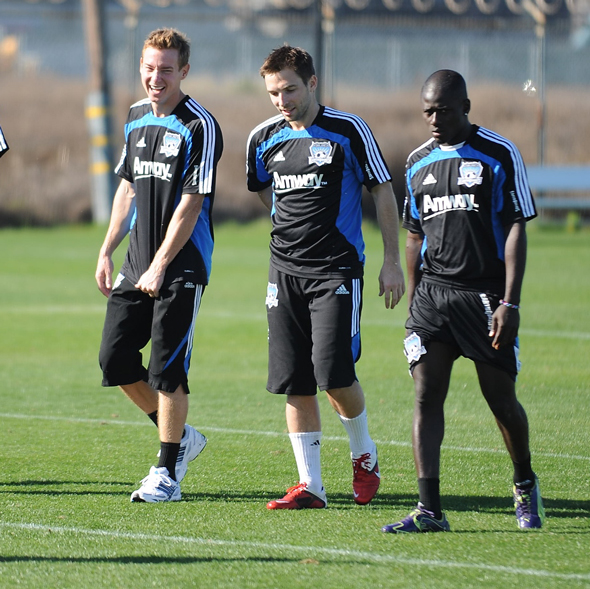 Friday’s Earthquakes training session was one of the most active of the week so far. Given that the team leaves for a week of preseason activity in Ventura starting Sunday, this was the last chance for Head Coach Frank Yallop and his coaching staff to evaluate players and trialists here in San Jose before making the trip down south.

After the regular complement of fitness drills in the early part of the morning session, the rest of the day was spent in a competitively paced 11 versus 11 scrimmage. Perhaps with an eye toward preseason friendlies with Chivas USA and the Los Angeles Galaxy next week, Yallop set up one squad with a line-up featuring many of the regular starting XI from 2010. Jon Busch anchored a defense of Chris Leitch, Brandon McDonald, Jason Hernandez, and Tim Ward while Brad Ring was stationed just in front of the back four as a defensive midfielder. Joey Gjertsen and Bobby Convey manned the wings with MLS Golden Boot winner Chris Wondolowski playing as an advanced attacking midfielder. Striking stalwart Ryan Johnson was paired up top with newcomer Steven Lenhart to complete the side.

On the other side of the ball were a complement of back-ups, draft picks, and trialists. Lottery prize David Bingham held solid between the posts and worked with a back four that included Steven Beitashour, Bobby Burling, and Justin Morrow. The midfield was under the stewarding of rookie Anthony Ampaipitakwong, with second year player Omar Jesseh running the wings. Newly signed Tony Donatelli played up top while also occasionally drifting into central midfield. A number of unidentified training camp invitees filled out the “B” team eleven.

The play was spirited by both sides during the full field scrimmage, with the “A” squad doing the most on attack while playing resolute in the back. Wondolowski especially was into the scrimmage, barking out orders to his teammates in an effort to keep possession from the other squad. With a steadying role provided by Ring in advancing the ball, Wondo was left to do what he does best and look for soft spots in the defense. He and Johnson both had opportunities to score, but were kept at bay by the fine work of Burling and rookie ‘keeper Bingham.

For the “B” squad, the eye-opener was Jasseh, who was not shy to take on defenders and find his shots on goal. He twice late in the scrimmage tested Busch with some fine long-range efforts, but didn’t find the back of the net on the day. Jasseh does tend to rely more on his own talents instead of getting his teammates involved, which at times made it easy for the defense to close down on him and steal away possession. Still, his hustle and aggression in the attacking third were well received, even if his defensive help was almost non-existent.

A center back duo of Burling and Morrow was a site to see, especially in terms of Morrow trying to contend with the extremely physical play of both Johnson and Lenhart. Burling used his height to every advantage against the “A” strikers, and seemed to relish the match-up with the equally tall Lenhart. Ampai did well to provide cover for the defense while also making some good decisions on the ball when initiating possession. The only goal of the scrimmage was from one of the trialists — a 25 yarder from just outside the corner of the penalty area that flew over Busch into the far upper corner of the frame off the woodwork. An audacious shot attempt to say the least, but probably a necessary one for a player still hoping to impress the coaching staff.

Sitting out the scrimmage were Sam Cronin and Ike Opara, who are both still returning to full health, as well as the trio of unsigned goalkeepers trying to make the team as the #2 or #3 netminder on the depth chart. Of the regulars for the Earthquakes, Ramiro Corrales was unavailable as well as Scott Sealy and Andre Luiz.

With the intense scrimmage completed — a 1-0 result as witnessed — and the players retreated to the vehicles for the ride back to the locker room, the last issue to address was this weekend’s Super Bowl. By an overwhelming margin in an informal poll of players leaving the NTF, the Green Bay Packers were the favorite choice to bring home the trophy this Sunday in Dallas. Hopefully those that want to watch the game will get that chance since Sunday is a travel day to Ventura.

After three friendlies in six days while in the Southland, the Earthquakes return to San Jose on Saturday, February 12th. Upon their return to the Bay Area, Center Line Soccer will have more from the training ground as the team prepares for the season opener March 19th.