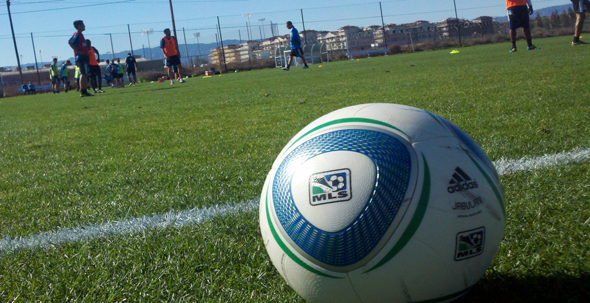 The San Jose Earthquakes were shut out 1-0 by Chivas USA in a preseason match at the Home Depot Center in Carson, CA. Photo: Robert Jonas, centerlinesoccer.com.

The San Jose Earthquakes dropped their first friendly of the preseason 1-0 to Chivas USA on the training grounds of the Home Depot Center in Carson Monday afternoon. In the second of three 35 minute periods, Chivas forward Alan Gordon neatly finished off a cross from Victor Estupinan to give the Goats all the scoring they needed. For the Earthquakes, the lone bright spot on offense came from Bobby Convey, who nearly gave the visitors the lead in the first period after a darting run through the defense. However, Chivas goalkeeper Zach Thornton made a nice save to keep Convey’s 25-yard blast from finding the back of the net.

The Earthquakes started the first period with the same line-up that featured during the prior week at training sessions in San Jose. According to MLSsoccer.com’s Adam Serrano, who was in attendance for the match, the Earthquakes “A” squad seemed content to let Chivas dictate the run of play for the majority of the opening 35 minute stanza.

“The Earthquakes didn’t have much of the ball in the beginning,” said Serrano. “With both first teams out there, Chivas USA had a whopping amount of the possession — probably 70-30% in my opinion. Meanwhile the Quakes played their familiar style, letting Chivas hold the ball and looking for the counterattack.”

Chivas USA striker Blair Gaven looked dangerous in his first competitive game since being forced out with an injury midway through the 2010 regular season. He tested the central defending pair of Bobby Burling and Brandon McDonald from the opening kick-off, providing a real spark to the Chivas attack, but was limited to just one quality shot on target. The Earthquakes readily absorbed the pressure from the Rojiblancos while waiting for the opportunity to strike back on offense.

“The counterattack really worked well for San Jose on the Convey shot,” described Serrano. “Pressure from the defensive line forced a turnover by Tristan Bowen that was collected on the right by Joey Gjertsen. He was able to hit Convey in stride on the counter, and he eluded two defenders before unleashing his shot on goal.”

The reminder of the first period was dominated by Chivas, as they asserted themselves on the game and kept the Earthquakes on defense. When they did get the ball, they struggled to connect passes together going forward and often left striking pair Ryan Johnson and Steven Lenhart with little support when the ball did enter the Chivas half of the field.

Entering the second stanza, both sides made changes to their line-ups. For the Earthquakes, the addition of rookie hopeful Anthony Ampaipitakwong proved to be the most fruitful, as the midfielder immediately showed his ability to be creative with the ball.

“Ampai came on and really added a lot of spark,” observed Serrano, “and the Quakes were able to hold the ball much better. They started to even up the possession numbers in that second period. The second period is where the Quakes really started to control things. They looked a lot better in that period and kept the possession in the Chivas end for the majority of play, a total turnaround from the first period.”

Unfortunately for San Jose, that change in possession statistics did not help them find any quality shots on goal. Instead, it was Chivas USA that would strike for the first goal of the game. After a defensive breakdown deep in the Earthquakes end, Chivas newcomer Victor Estupinan caught defender Bobby Burling flat-footed and floated a nice cross into the penalty area. After making the run toward goal, forward Alan Gordon got inside of defender Chris Leitch and one-touched the ball past goalkeeper Andrew Weber for the 1-0 lead.

The Earthquakes bounced back from the defensive miscues to keep Chivas from mounting any further scoring chances, but the damage was done and San Jose was held scoreless for the reminder of the second period.

As the game entered the final phase, both teams brought on additional substitutes, including the whole array of players currently on trial with the Earthquakes. With such a disparate collection of players the team struggled to find any momentum or rhythm over the game’s concluding stanza. The one bright spot for San Jose appeared to be midfielder Paolo Jimenez, a trialist from Costa Rican club Brujas. The 27-year old has been trying to make the move to MLS and has reportedly also drawn interest from D.C. United.

“He had most the action in the third period and was able to make some good moves forward,” evaluated Serrano. “Unfortunately, he was not able to get much in the way of connections with his teammates and seemed frustrated at times. He had some difficulty breaking down defenders one v. one but seemed very comfortable when it was a possession styled game.”

Up next for the Earthquakes is a preseason friendly with the Los Angeles Galaxy on Thursday. For the regulars, hopefully they have shaken off the rust of a difficult game against Chivas and will be more assertive in their play. For the rookies and trialists, it gives them another chance to be measured up by the Quakes coaching staff. With only three weeks left until regular season player rosters need to be finalized, time is running out for those hopefuls.