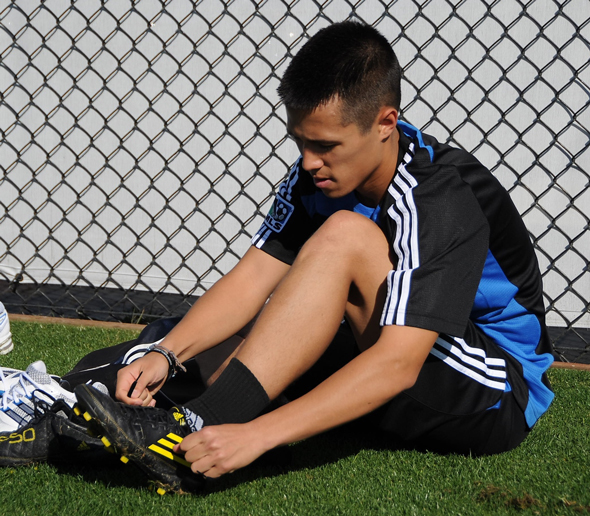 In what was expected to be a quiet morning around the Nutrilite Training Facility on the day MLS teams need to have their player rosters compliant with league rules, the San Jose Earthquakes made some personnel moves. Officially joining the Quakes is their second round pick in the MLS SuperDraft, midfielder Anthony Ampaipitakwong. His contract was approved by MLS, but details of the deal were not released. While Ampai was on his way in, the Earthquakes showed the door to recently acquired Anthony Donatelli. The former Montreal Impact forward/midfielder had been with the team from the first day of preseason training — including the just concluded stint in England — before his release on Tuesday.

Ampaipitakwong has seen considerable minutes in preseason matches as a holding midfielder playing alongside other non-first team players. The senior from Akron is steadily improving in that role, and also showing his worth as an attack minded player. Ampai is clearly developing a good chemistry with the second team, and will likely feature heavily for the Earthquakes in the returning MLS reserve league.

Donatelli had every opportunity to make an impression on the coaching staff in the preseason, but he proved to be limited in his ability to excel with the first team. With the completed signing of Khari Stephenson two weeks back, Donatelli was bumped down the depth chart in midfield. While also a striker in his days in the USL, Donatelli was ranked well below the other Earthquakes forwards. When unable to rise up the list of midfielders during preseason camp, the decision to waive the 26-year old ahead of the roster compliant date was necessary to free up space and salary for other potential signings.

In addition to Donatelli, two other players were officially waived by the Earthquakes and are now available in a league-wide waiver draft to be conducted on March 2nd, Cornell Glen and Brian Edwards. Glen, in a move that was simply a formality at this time, was announced as a waiver candidate back in November and has not trained with the team since the conclusion of the 2010 season. Edwards, a potential back-up to starting goalkeeper Jon Busch, lost out on the third goalkeeping spot on the roster to Andrew Weber as the preseason wore on and hasn’t been seen at the NTF since early February.

Recapping the state of the San Jose Earthquakes roster as of March 1, 2011, the following players are under contract, or are awaiting contract approval from the league: