Share All sharing options for: San Jose Earthquakes hope it won’t be déjà vu all over again when they face Real Salt Lake in MLS First Kick 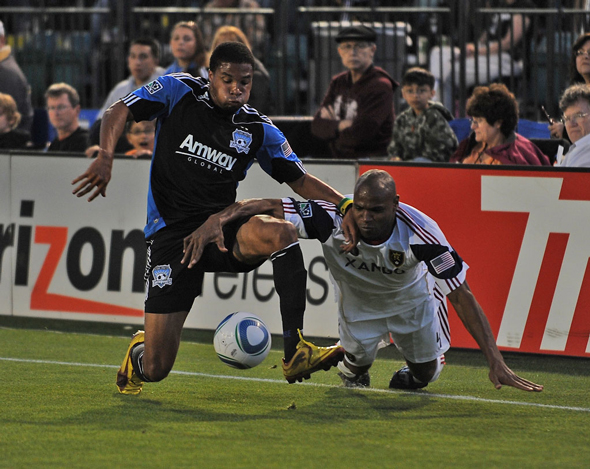 When Major League Soccer revealed the slate of opening games for the 2011 regular season, better known as MLS First Kick, the San Jose Earthquakes could be excused for thinking they had accidently been given the 2010 schedule instead. However, this was not a case of the league getting lazy and recycling their prior work — the Quakes would indeed host Real Salt Lake in the season opener at Buck Shaw stadium for the second year in a row. And with that day now upon them — kickoff in Santa Clara is 7:30 p.m. — the team will look to erase the bad memories of last season’s difficult home opener.

In last year’s affair, the then-defending MLS Cup Champions blitzed the Earthquakes for a convincing 3-0 victory. While many in and around the team feared the result marked the start of a third straight year of subpar soccer in the South Bay, the Quakes showed great resiliency over the next month to right the ship and move up the Western Conference ladder. In hindsight, for a team coming off two straight last-place finishes in the conference, using a match against the defending champs as a measuring stick was premature. Over the course of a full 30-game schedule, there looked to be no danger that the Earthquakes would contend for the Supporters Shield, but they did have the talent and the confidence to qualify for the MLS Cup playoffs.

The 2010 edition of the Earthquakes that made such a memorable run in the postseason remains mostly intact heading into the 2011 season. The two major acquisitions by the team, forward Steven Lenhart in a trade from the Columbus Crew and midfielder Simon Dawkins on loan from partner club Tottenham Hotspur, will not be available for tonight’s match. Lenhart is still recovering from a minor surgical procedure on his knee while Dawkins was delayed in his arrival in San Jose from England as he awaited completion of his ITC and necessary work permits. With both expected starters unavailable, Head Coach Frank Yallop most likely feature a starting XI familiar to followers of the 2010 Earthquakes:

The semantics of the formation are not very important — whether a 4-3-3 or 4-4-2, the forward players will likely rotate on the field as play demands — and the tactics will also likely remain familiar. A solid defensive back four will get heavy assistance from holding midfielder Sam Cronin, who will be responsible for linking possession with the offense and wings going forward. Ryan Johnson will at times play as the lone target forward allowing Chris Wondolowski to drift into openings created by the run of play. Khari Stephenson will favor helping defensively, but will need to venture forward to help link the passing of the wingers and forwards. In all, the tactics call for a more possession style of play — one all to familiar in the successful efforts of their opponents Real Salt Lake — instead of the primary counterattack strategy of 2010. The Earthquakes spent a great deal of time and effort practicing the more passing and possession tactics in the preseason, and RSL will prove a stern test for how much progress they have made.

Real Salt Lake enter the MLS regular season having already played three competitive matches in the 2010-11 CONCACAF Champions League (CCL) tournament, and will likely lean on their good form in those matches to start strong in league play. Head Coach Jason Kreis has built a team designed to handle the rigor of playing in multiple competitions, so don’t expect them to be lethargic tonight. RSL will likely make some line-up adjustments from the starting XI that took the field in their 2-0 win over Costa Rica’s Saprissa on Tuesday. Defensive captain Jamison Olave looks to be sidelined due to injury, while ex-Earthquake Arturo Alvarez is healthy and ready to see some playing time. Real Salt Lake might be focusing on winning the CCL championship this spring, but they are also gunning to capture the 2011 MLS Supporters Shield as well.

Kick off tonight is at 7:30 p.m. at Buck Shaw stadium — rain or shine — with pregame festivities beginning in the fan zone at 5:30. With new food options and entertainment implemented at the Buck in time for the 2011 season, be sure to come out early to take full advantage of all the new amenities. And if the Earthquakes pull the upset and beat Real Salt Lake tonight, don’t rush home too soon, stick around to collect your first 2011 Win Pin.