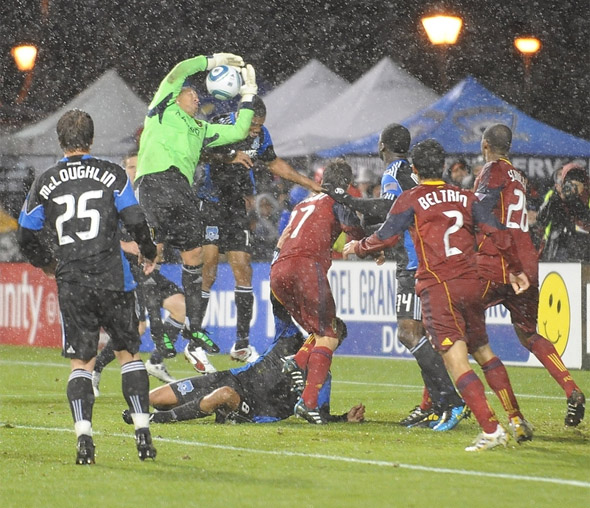 A relentless rain and high winds played a significant role in Saturday night's match, but RSL keeper Nick Rimando kept a clean sheet despite an Earthquakes attacked that pinned their opponents in their own end for the last 20 minutes. Photo: Joe Nuxoll, centerlinesoccer.com

Center Line Soccer's complete match coverage includes our new post-game podcast, which features interviews with players and coaches from both sides, as well as a photo gallery.

(Santa Clara) On a miserable wet and windy night, the San Jose Earthquakes opened their 2011 MLS season with a 1-0 loss to Real Salt Lake Saturday at Buck Shaw Stadium. San Jose had most of the possession and scoring opportunities, but it was Kyle Beckerman who hit the back of the net, beating Jon Busch in the 63rd minute to give the visitors all 3 points.

“I thought we dominated play most of the game,” Earthquakes coach Frank Yallop said. “We moved the ball well. I thought we were dangerous. I feel really, really upset for the guys not to get something out of that game.”

Earthquakes fans have spent the winter asking “will Chris Wondolowski score like he did last year?” and on this night, at least, the answer was a sad, soggy “no.” Two minutes in, Wondo scuffed his first shot, a right footer from 15 yards, then missed a golden opportunity in the 21st minute. A cross from the right corner by Chris Leitch found Wondo all alone inside the six yard box, but last year’s golden boot winner almost missed it completely, his header glancing off and trickling wide of goal.

“I take the blame for this (loss),” Wondo said. “I had three sitters and missed them all. It’s pretty frustrating; it’s just one of those games. I need to do a lot better.”
The elements were possibly the worst ever for an Earthquakes home game, with  relentless rain and a nasty, gusting wind from start to finish.

“The weather was pretty bad. It made the ball a little slick,” Wondo said. “Especially the wind. It was hard to get the ball down. It was pretty unpredictable.”

So, did the wind play a role in that first half miss?

“I’d like to think so, but that’s all me. I have to finish that, wind or no wind,” Wondo said. “That one’s going to haunt me for a while.”

Wondolowski also had a chance in the 71st minute, after a surging run into the box by newcomer Simon Dawkins. The ball fell to Wondo 15 yards from goal for a clean shot, but he struck it right at Salt Lake goalkeeper Nick Rimando.

“It’s game one, so I’m not going to get down on Chris,” Yallop said. “He’s going to score his goals. He had three or four good chances tonight and didn’t get one. If he wasn’t having any chances, I’d be worried, but he had a ton tonight that normally he puts in.”

While this was the season opener for San Jose, Salt Lake has already played Meaningful Games in 2011, and successful ones at that.They thrilled 16,888 at Rio Tinto last Tuesday, taking the first leg of their CONCACAF Champions League Semifinal against Saprissa 2-0. But Salt Lake was without reigning MLS defender of the year Jameson Olave (out with strained right hamstring), and had to turn to 2009 third round pick Chris Schuler to play center back, a young man with all of 90 MLS minutes on his resume at the start of the night.

Still, San Jose couldn’t beat Nick Rimando, who made 10 saves, 8 in the second half, to earn the shutout win.

Salt Lake’s offense Saturday night was largely limited to a five minute span in the second half. Just past the hour mark, Alvaro Saborio sent Ned Grabavoy in alone on goal, but Jon Busch came up with a big save to keep the game scoreless. Salt Lake had one more shot in them, with Javier Morales teeing up Kyle Beckerman near the top of the arc, and the Salt Lake captain made it count, beating Busch just inside the left upright for the game’s only goal.

“If you look at their goal, Beckerman hits a good shot that squeezes right by Brandon (McDonald), takes a little nick off him and it’s right in off the post. Perfect. You couldn’t hit it any better,” Yallop said.

Once Salt Lake went ahead, the Earthquakes countered by inserting three new faces into the game. Simon Dawkins came on in the 66th minute, Ellis McLoughlin in the 71st, and Anthony Ampaipitakwong in the 81st, and the youngsters provided some positive energy, if not goals. Dawkins especially looked dangerous, attacking the Salt Lake back four with several determined runs.

“The three guys made a difference to the game, sparked us a bit,” Yallop said. “It’d have been nice to (bring them in) at 0-0. I was just about to (bring Dawkins on) when they scored.

“They did great,” Yallop said of his trio of rookies. “Ellis showed some running in him. Simon looked good when he surged with the ball.”

“Our depth is good, and I think having (injured forward) Steve Lenhart back will be good.” Yallop added, “Steven might be back next weekend, we’ll see how he practices.”

On their way to Buck Shaw Saturday, Earthquake fans couldn’t help but detour to take a look at the demolition site nearby, where one day a new stadium — one with a roof — will be built, and dream of a brighter tomorrow.

Frank Yallop is further along with his construction project than the stadium contractors, building a team that includes the core of the group that finished 13-10-7 (third best in franchise history) last year, a club that fell just one lucky-bounce cross from Kosuke Kimura short of a MLS Cup Final. But Saturday night was one to forget about.

“I thought we dominated, especially the first half, then had our chances late in the game to get back in the match. We kept going until the end, and we could have got a goal. That’s showing good signs, but it’s about getting points, and tonight we didn’t get anything out of the game,” Yallop said. “I was very happy with the performance, but obviously not the result.”