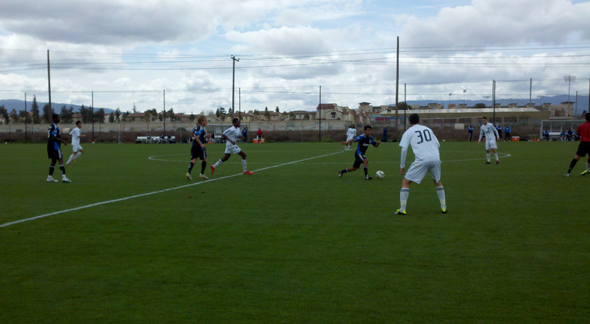 (San Jose, CA) The San Jose Earthquakes defeated the Vancouver Whitecaps 2-1 on Tuesday afternoon in the first Reserve League match for either side this season. The Whitecaps took the lead on a long range strike from midfielder Bedri Gashi in just the eighth minute, but the Earthquakes battled back to draw even in the second half on a Vancouver own-goal following a San Jose corner kick. In the 64th minute, forward Matt Luzunaris tallied the match winner from close range to give the Earthquakes a win in the first of ten reserve league matches scheduled this year.

Assistant coach Mark Watson led the reserve team on the day, and picked a starting XI that featured some players that are great examples of the depth built into the roster this season. With a mix of game-day 18 players and those knocking on the door to be considered, Watson was pleased with the overall effort of his players.

“Every year you try to get a little bit better. And having a deeper squad was something we wanted to do,” explained Watson. “I think the way we played today showed we have a lot of players that are doing well and can make a contribution for us this season.”

With a merciful break in the bad weather that has settled in across the San Francisco Bay Area this week, the match began under sunny skies at the Earthquakes’ Nutrilite Training Facility in San Jose. The sounds of heavy machinery working next door to tear down buildings on the site of the proposed new Quakes stadium provided the audible backdrop for the sparsely attended game where seating came only to those that provided their own chairs. Both squads wouldn’t require a large crowd to provide a lift, as players were already motivated by the opportunity to impress their respective coaching staffs against quality opposition.

The Earthquakes featured a starting XI with three players fresh off of substitution appearances in the weekend loss to Real Salt Lake. Spurs loanee Simon Dawkins featured in the center of midfield alongside impressive Akron rookie Anthony Ampaipitakwong. The duo of talented technical players quickly teamed up to give the Quakes reserves a controlling edge in midfield possession. Teamed up with wingers Ellis McLoughlin and Rafael Baca and lone striker Matt Luzunaris, the offensive quintet looked promising from the opening whistle. The steady play of holding midfielder Brad Ring contributed to the fine efforts up front.

Despite the early advantage in possession, the Quakes relinquished a goal in the eighth minute following a turnover far up field by left back Justin Morrow. When Ampai dropped a ball back to Morrow, he hesitated to meet the pass and the Whitecaps Canilo Sanvezzo seized control of the ball. He quickly dribbled into the Quakes half of the field before finding midfielder Bedri Gashi above the penalty area. With space to work with in front of the defensive back four, Gashi took one touch before unleashing a rocket shot off the underside of the crossbar and just out of the reach of goalkeeper Andrew Weber. A very bright start for the Whitecaps, but the goal was certainly against the run of play.

Ampaipitakwong nearly pulled one back for the home side, as a clever cross to the top of the area in the 11th minute from McLoughlin gave the central midfielder space to fire a shot on target. However, ex-Earthquakes fan favorite and current Whitecaps back-up goalkeeper Joe Cannon parried the ball to safety, and the threat was over.

In the 21st minute, Vancouver nearly capitalized on a defensive miscue when Ike Opara was dispossessed trying to dribble out of danger near the center line by Sanvezzo. The Whitecaps forward raced toward goal, but Opara showed great-up hustle to catch Sanvezzo and narrowly avoid a foul with a tough takeaway tackle at the top of the area.

Minutes later, Opara was again the center of attention, when he leaped high above his marking defender to meet a corner kick from Ampaipitakwong that narrowly missed the target. Clearly the athletic Opara’s ability to convert set-pieces will haunt opposing defenses all season long.

Already displaying a great tough on the ball in the opening quarter of the match, Dawkins wooed the crowd with a clever give-and-go sequence with Luzunaris in the 29th minute. Following a run from just inside the Whitecaps half of the field, Dawkins fed the ball to Luzunaris at the top of the area, then sprinted forward to collect the return pass in stride before firing a shot that went just wide of the right post.

“Dawkins is a player we are hoping will make a big contribution for us this year,” said coach Watson about the Quakes most recent player arrival. “He did well with the minutes he got Saturday (against Real Salt Lake), and we wanted to give him more minutes today. He is in great shape, but perhaps a bit short of match fitness. That’s why we wanted to see him out here today.”

Despite the best effort of Dawkins and his teammates, the Earthquakes would get no closer to finding an equalizer through the remainder of the first half.

The second stanza began in much the same way as the first ended, with the Earthquakes carrying the majority of possession and exploiting the wings in an effort to find passage into the Vancouver area. While keeping the same line-up of the field, Baca and McLoughlin switched sides to start the second half, giving the Seattle native chances to cut back into the center of the field onto his favored left foot. Dawkins and Ampaipitakwong continued to act in concert in the center of the pitch while Luzunaris tiptoed onside alone the Whitecaps back line.

A dangerous free kick by the Earthquakes in the 48th minute was taken by Mcloughlin just 25 yards from goal, but his blast was deflected by a defender and resulted in a corner kick. Ampai’s delivery was cleared to Baca, but his follow-up effort was handled by the defense.

Four minutes later, the Earthquakes again earned a corner kick after putting Vancouver on the defensive. With Opara looming in on goal, a phalanx of defenders surrounded the second-year central defender in an effort to clear the Ampaipitakwong kick. Unfortunately, the ball deflected off a Whitecap player and trickled past goalkeeper Cannon for an own goal and the tying score.

With possession still favoring the Earthquakes, the defensive line was playing nearly to the halfway line for long stretches of the second half. In the 62nd minute, after a shoddy Vancouver clearance pass fell to his feet, Bobby Burling spied Luzunaris racing side by side with his defender. Burling placed a perfect long ball right into the path of the 22-year old striker, but his chip attempt of an onrushing Cannon at the top of the area went agonizingly wide.

“A beautiful ball from Bobby,” described Luzunaris the pass from Burling. “That’s what every striker wants to get, a clear one-on-one chance against the goalkeeper. I hesitated when starting my run, but I got there and just didn’t get the shot on to the right part of my foot.”

The next sequence of play brought the Earthquakes even closer to scoring as a feed down the left flank to Baca gave the speedy midfielder room to maneuver at the edge of the area. After beating his defender to the byline, Baca turned into the area and spun to shoot directly into the arms of goalkeeper Cannon. The ex-Earthquake then booted the ball to safety.

After Vancouver was dispossessed of the ball on the ‘keeper’s deep clearance, the Quakes immediately surged forward into the Whitecaps end of the field. Dawkins started the sequence off with a clever move to create space just inside the center circle, where he passed to the right wing for an in-stride McLoughlin. The 20-year old midfielder dribbled the ball toward the byline before cutting back a pass to the edge of the 6-yard box. Luzunaris was there to meet the cross, and he expertly placed the ball to the back post, well out of reach of the goalkeeper.

“The build up from the rest of the guys was great,” credited Luzunaris after the game. “Ellis made a great run and I went to the far post to get the pass. Those are the types of goals a striker has to finish — those are 100% chances and you have to capitalize. You don’t get that many chances in these types of games where it is more about fitness, but we did really well today.”

The complete sequence was a just reward for the extended spell of possession the Quakes displayed over the preceding ten minutes of play.

In the 72nd minute, San Jose should have had a third goal after Ampai fed Baca on the right wing and the LMU senior tiptoed with possession along the byline. Cutting the ball back to McLoughlin, the assist earner on Luzunaris’ goal fired a one-touch left-footed rocket over Cannon but off the top of the crossbar and out of play.

Vancouver held on under the Earthquakes determined play and nearly forced a draw with two late scoring opportunities that went wanting. In the 79th minute, after an ill-advised free kick from goalkeeper Weber settled to the feet of Gashi 35 yards from goal, the Whitecaps midfielder failed to cleanly possession the ball and try a long range effort with Weber sprinting back into position. In the 84th minute, midfielder Doudou Toure escaped his marker on a corner kick and headed an opportunity high of the target.

The remainder of the match played out with neither side threatening to score, and the referee blew his whistle on the Earthquakes’ 2-1 victory over the Whitecaps. The San Jose reserve squad next plays on April 3rd, as they host the Seattle Sounders in an 11 a.m. match at the NTF.