Share All sharing options for: Playing Time: The American Dream 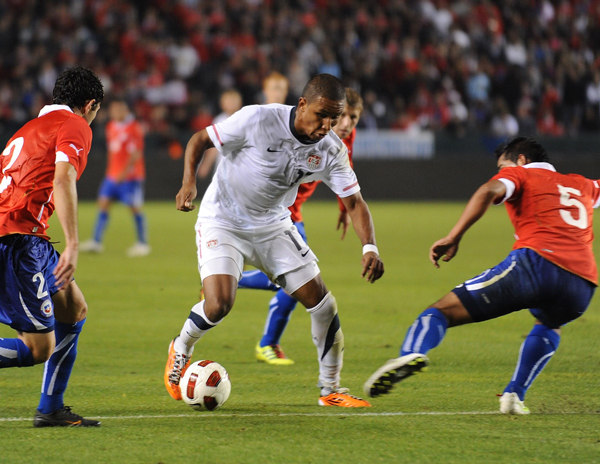 Juan Agudelo, shown here during a US Men's National Team draw against Chile in January 2011, is one of many young Americans hoping to see action against Argentina in Saturday's USMNT friendly. Photo: Joe Nuxoll, centerlinesoccer.com.

For all those truths we hold to be self-evident in this, our relentless pursuit of the American dream, we struggle to identify a coherent sporting philosophy.

All people are created equal. Earning something is better than being given something. Rags to riches. Blood, sweat, and tears. The self-made man. It's a meritocracy. Except that it isn't.

A sense of entitlement has crept into professional sports, as it has in American schools and businesses. Soccer, too, has fallen victim to this quiet malice. It is no more apparent than in discussions surrounding national team selection.

Leading up to the anticipated friendly against Argentina, United States Men's National Team (USMNT) supporters have pondered personnel and general objectives in earnest, as one would expect from a fan base that endured the 2010 that it did. The World Cup in South Africa offered yet another chance to examine how far we had come, where we want to go, and how we want to be known as a soccer nation.

In these discussions, it is all too easy to get drawn into tangential arguments in which no one can see the forest through the trees. It is tempting to cast stones at individuals and tactics. It is unavoidable to speculate about the road not taken and, invariably, to apply such speculation to the roads ahead. But we must not forget that these discussions — the myriad banter that occurs on Twitter, at the pub, and in the media — are important. Listen closely, reserve judgment, and you will notice a collective yearning for success. Opinions are diverse. Some are informed, while others not. But we all want something better.

That leads us to the how — the nexus of philosophy and reality. You see, Americans are aware of our strengths and weakness as a soccer nation. Most fans know that we produce more talented goalkeepers than we can utilize as a national team — a very good problem to have. We know that our midfield is increasingly deep and skilled, though tactically a work in progress. And yes, we know that we are in the tall grass both at the front and back of the pitch. As such, we do not have the luxury of being choosy. There aren't multiple ways in which the USMNT can win matches. Under these circumstances, one might expect a philosophy grounded in quintessentially "American" elements — merit and competition.

This is not the case.

Jozy Altidore, who is expected to play Saturday, appears to have "earned" a permanent starting role for the USMNT. Since the World Cup, at which he failed to score, Altidore has played less than 950 minutes in 23 appearances (16 as a starter) and scored only two goals. The Argentina friendly takes place exactly nine months to the day from that painful loss to Ghana. Mathematicians will note that Altidore's playing time since that night amounts to slightly more than 100 minutes per month. That, my fellow Americans, is our undisputed starting striker. Regardless of other options, when does his playing time, or lack thereof, call into question his status? At some point, doesn't a "less talented" striker that plays regularly for his club make more sense?

At the opposite end of the pitch, the defense is similarly weak — an ever-changing, piecemeal ensemble with a tendency to concede goals early. Here, you'll find Oguchi Onyewu, a gentle giant who looks the part of center-half, but possesses neither the skill nor durability to be called stalwart. In contrast to Altidore, playing time is less of an issue for Onyewu. Aside from his odd stint at AC Milan, Gooch regularly starts for his clubs and has recently showed versatility playing out wide for Twente. His place in the USMNT is not untouchable, but, absent other options, should it not be more secure than Altidore's?

And then there's Michael Bradley. Some dub MB90 a beneficiary of nepotism, but he has earned his stripes. He has at various times put his club and country on his back - unafraid of responsibility or failure — and staved off relegation in the Bundesliga and elimination at the World Cup. Yet, his role anchoring the midfield has been called into question. Since moving from Borussia Mönchengladbach to Aston Villa, Bradley has gone from no-brainer to fringe player. That should change in due time. Of all USMNT players, Bradley has the ability and determination to reclaim his place. However, in central midfield, he finds himself surrounded by the likes of Jones, Edu, Clark, Kljestan, and McCarty, all waiting to step in.

Thus, with a glimpse of reality, we return to the question of philosophy. How do we want the USMNT run? Do we want an open competition — a subjective meritocracy based on match fitness and overall talent? Do we want at least a few places reserved — perhaps for Bradley, Dempsey, or Donovan — in furtherance of stability?

Ultimately, Saturday's match is only a friendly. As an increasingly wise soccer nation, however, we are more concerned than ever with knowing what is happening and why. We are no longer fans every four years, as we have seen first-hand the consequences of accepting an ineffective status quo. If we cannot win, then we can expect to build and see tangible evidence of our progress. If we cannot afford an elite coach, then we can expect a clearly articulated philosophy. If we cannot yet produce Lionel Messi, David Luiz, or Cristiano Ronaldo, then surely we can expect to field at least eleven players that not only have skill and experience, but who also get regular playing time.

Corey Bennett is a Co-Founder of Church of Soccer, licensed attorney, freelance writer, and aspiring soccer magnate. Follow his exploits at @churchofsoccer and @coreybbennett.