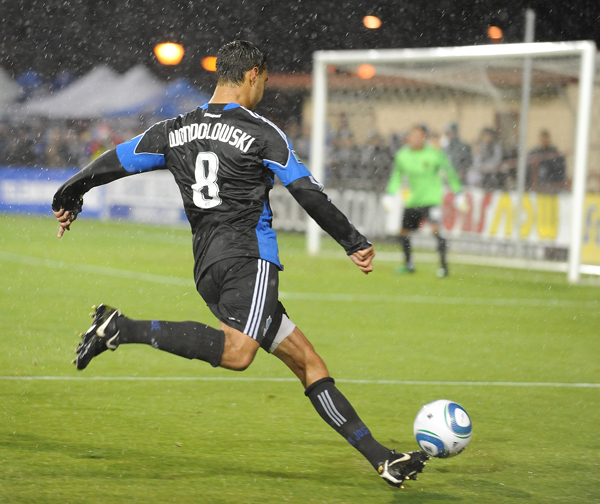 Chris Wondolowski and the San Jose Earthquakes will look to ignite their offense against FC Dallas this Saturday in Frisco, Texas. Photo: Joe Nuxoll, centerlinesoccer.com.

An otherwise forgettable week in the Bay Area — at least weather-wise — is hopefully coming to an end with the last of a series of storm fronts passing through early today. What started with the Great Deluge of 2011 during the season opening 1-0 loss to Real Salt Lake brightened up somewhat with a midweek win against Vancouver in the reinvigorated MLS Reserve League, then settled into a steady pattern of training sessions for the San Jose Earthquakes. Looking to put the RSL loss behind them, the boys in blue-and-black practiced intently in preparation for tonight’s 6 p.m. away match at FC Dallas.

After the Earthquakes reserves dispatched of the Whitecaps on Tuesday, the senior squad took to an early afternoon of fitness and scrimmage drills. The usual suspects were in action on the day, while hopefuls to make Head Coach Frank Yallop’s matchday 18, Steven Lenhart, Scott Sealy, Tim Ward, and Omar Jasseh continued their rehabilitation exercises. Lenhart was looking quite spry for someone coming off of recent knee surgery, but did not participate in any full-speed activities. From the Earthquakes starting XI of last Saturday, midfielder Khari Stephenson was the only player absent, as he prepared to join his Jamaican teammates ahead of this weekend’s international friendlies. Somewhat surprising was Ryan Johnson not joining The Reggae Boyz for these friendlies, as the Quake’s forward seemed to have broken into the program for good in 2010.

On the field, the players were all business during training. Carrying over from the post-game feelings after the loss to RSL, the Earthquakes showed they still had that chip on their collective shoulder at not earning a result after giving such an encouraging performance. Chris Wondolowski exemplified that zeitgeist with a fine display during the end-of-session finishing drill.

Fast forward to Thursday’s training session — unfortunately held in conditions that mirrored the RSL monsoon — and the team was taking shape ahead of Friday’s travel day to Frisco, Texas. With Ward not yet ready to take the field, defender Chris Leitch continued his preparations to start at right back against FC Dallas. He’ll have his hands full with Hoops defender Zach Loyd’s marauding runs down the left side — presuming Loyd is not switched to center back to cover for red-card suspended defender Brek Shea. FC Dallas, coming off a home draw to Chicao last weekend, will need to mix their line-up around to cover for the absence of Shea, and Loyd looks to be the chief candidate to fall back to the center.

Manning the Earthquakes central midfield on Thursday alongside Wondolowski was newcomer Simon Dawkins. After his electrifying MLS introduction against RSL and a solid performance in the Reserve League win against Vancouver, Dawkins looks primed to take over for Stephenson in Yallop’s starting XI this weekend. The loanee from Tottenham has been very impressive with the ball in training, but also shows a good intellect for off-the-ball positioning as well. His interplay with Ellis McLoughlin and Anthony Ampaipitakwong on Tuesday was a great advertisement for his ability to mesh with his new Earthquakes teammates.

Ryan Johnson continues to be the man up top in the Quakes plans for FC Dallas, as MLS SuperDraft day trade product Steven Lenhart was ruled out of this weekend’s match. Yallop indicated that Lenhart was not far enough in his recovery to risk putting out there against Dallas, and he will remain in San Jose in order to continue his rehabilitation.

Second-year defender Ike Opara appears to be the odd man out in the battle for playing time in the center of the Earthquakes defense, as Brandon McDonald and Jason Hernandez continue to display the fine chemistry they have developed together over the last couple seasons. Opara’s ability to be dangerous on set-pieces should give Yallop reason to pause when excluding him from the starting line-up if the season presses on and the Quakes continue to find scoring goals lacking, but for the time being he’ll stay ready to go at a moment’s notice if called into action.

With the loss to Real Salt Lake being more a disappointment than an abysmal performance, no one looks in danger of losing their starting XI position in the Quakes second MLS match of the season. The necessary switch of Dawkins for Stephenson appears to be the only change to look for against FC Dallas later this evening. A look at the probable line-up against FC Dallas, which is best identified as a 4-3-3 formation with Johnson positioned just above the central midfielders, is shown below:

The match tonight begins at 6 p.m. PDT — just after the conclusion of the U.S. Men’s National Team international friendly against Argentina — at Pizza Hut Park in Frisco, Texas. TV and radio broadcasts are available, and Center Line Soccer will have a full review of the match later tonight.