Share All sharing options for: Javier "Chicharito" Hernandez brace leads Mexico to a dominating 3-1 win over Paraguay at a sold-out Oakland Coliseum 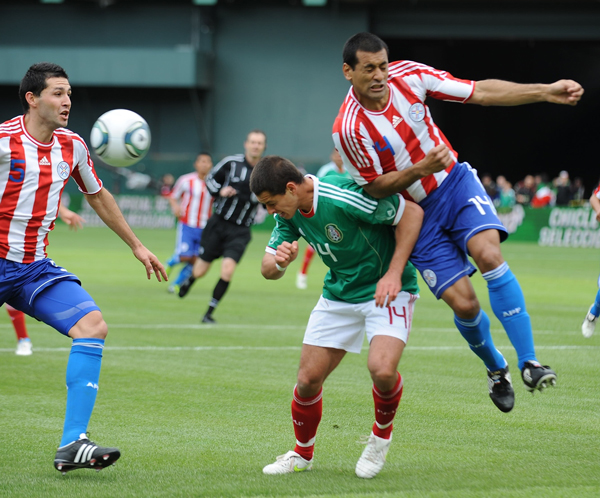 Javier "Chicharito" Hernandez scores the first of his two goals to lead Mexico to a 3-1 victory over Paraguay at the Oakland Coliseum, March 26th, 2011. Photo: Joe Nuxoll, centerlinesoccer.com.

(Oakland, CA) A festive crowd of red, white and green clad fans braved the unsettled weather at the Oakland Coliseum Saturday afternoon to watch their beloved Mexico National Team defeat Paraguay by a 3-1 score. A brace from striker Javier “Chicharito” Hernandez and a goal from Andres Guardado were all that was needed for a Mexico side that was never in any danger of losing the match. A late consolation goal from Paraguay’s Marcos Riveros made the final result look much closer than it actually was.

“In the first half we were a dynamic team,” said Mexico Head Coach Jose Manuel de la Torre through a translator after the match. “We were tenacious as a team. This game is just the beginning of our preparations for the Gold Cup. Our strategy was good, but we hope we can still get better.”

El Tri had their way against a Paraguay defense that was too static for the quicker Mexico forwards. Constantly finding space down the right flank, forward Pablo Barrera constantly tortured the defense with well-delivered crosses into the area. He earned assists on the first two goals, the second in combination with Mexico captain Rafa Marquez.

There was a special pre-game ceremony to honor Marquez on the occasion of his earning his 100th cap for Mexico with the start against Paraguay. He was presented with a commemorative Mexico jersey labeled with the number “100” as reward for his many years of service to El Tri. Earning an assist on the day was a fitting event for the defender, who so often has been an integral part of the Mexican offence.

Paraguay looked nothing like the team that reached the quarterfinals of the 2010 FIFA World Cup just 8 months ago. The lackluster performance by his side drew the ire of Paraguay’s head coach Arbitro Martino after the first of two international friendlies with the top two teams in CONCACAF.

“This was not the team I wanted to see today, especially in the first half,” said Martino through a translator. “This game makes me worried for the Copa America. We made too many errors and our defense was not marking well. This was a step backward for our club. We definitely were resting too much on our laurels from our World Cup success.”

The game was hardly six minutes old when the majority of the 48,110 in attendance were already cheering “Ole!” on every Mexico possession. Perhaps spurred on by that show of energy from the stands, the El Tri offense wasted no time in attacking the Paraguay defense.

In the dying moments of the 7th minute, a ball into space down the right flank left Pablo Barrera with acres of space to run toward the byline and get off a pinpoint cross into the six-yard box. Finding just enough space behind the defense, Javier “Chicharito” Hernandez sent a powerful header low and to the far post beating Paraguay goalkeeper Justo Villar for the opening goal of the match.

In the 12th minute, Paraguay was nearly gifted a chance on goal when some sloppy defending from Francisco Rodriguez sent the ball trickling across the area. With midfielder Enrique Vera racing in to meet the ball at the penalty spot, Rodriguez recovered with just enough time to poke the ball to safety.

Mexico had a good chance to double their lead in the 15th minute after Hernandez played provider from deep in the left corner. He spotted the onrushing Andres Guardado racing in on goal, but the midfielder sent his one-touch shot high and wide of the target.

Paraguay was looking shaky in defense, and Mexico continued to find space on the wings in the attacking third. In the 29th minute, Guardado atoned for his earlier miss with a beautiful turn and finish from a through ball pass from Maraquez. The sequence started with Barrera deep on the right flank looking to make the cross before electing to pass the ball back to Marquez 25 yards from goal. Rather than shoot from distance, as the Mexico captain is apt to do, he sent a perfect pass to Guardado at the penalty spot and the lead was 2-0.

With the smell of blood in the water, Mexico began to pour forward with every possession. A particularly nice overlapping run from defender Ricardo Osorio down the right flank was followed up with some nifty dribbling to get around Paraguay’s Aureliano Torres and turn toward goal from the byline. A deft pass to an in-stride Hernandez and the Manchester United striker gave Mexico its third goal of the match.

“The most important result today was that we earned the win,” said Hernandez after the game through a translator. “If I score goals and the team loses, that is worse than me not scoring and we win. I am very happy that our performance as a team against a tough opponent will give hope to all our fans. I am happy that I scored today, but more happy about the win.”

Paraguay did little to possess the ball in the midfield for long stretches of the first half, and often looked uninterested in entering the attacking third. Often forced to hit the ball back through their defensive back four, Paraguay practically invited the Mexico forwards to camp out in their half of the field.

Mexico’s defensive midfield duo of Israel Castro and Gerardo Torrado time and time again transitioned the ball to the wings with little defensive effort presented by the Paraguayans. With Chicharito stationed centrally, fellow forward Barrera sought space on the right side, and was rarely troubled by the defense. Paraguay’s inability to shut down the wings led to numerous forays by Mexico into opportunistic areas of the field.

Halftime couldn’t come soon enough for Paraguay, as Mexico took a 3-0 lead into the locker rooms at intermission. Head Coach Gerardo Martino certainly didn’t take it easy on his squad, as Paraguay looked much more dangerous after the reset.

But Mexico’s defense held solid, and the momentum swung back in favor of El Tri. A nice run down the right side from Osorio gave the defender the choice of crossing or shooting. He elected to do the latter, and flashed a shot just wide of the far post, when a simple cross to Hernandez in the area might have proven more fruitful.

In the 65th minute, Mexico Head Coach Jose Manuel de la Torre pulled back on the reigns of his offense, subbing out goal scorers Hernandez and Guardado. Both had been relatively quiet in the second half as Mexico played more relaxed holding a three goal lead. While Paraguay was seeing more time in the attacking third, they had little statistically to show for their effort.

The pace of the game slowed to a crawl by the 70th minute, while a scattering of fans tried to bring energy back to the proceedings by initiating the Mexican Wave. Perhaps as a reward for their loyalty, Giovanni Dos Santos was introduced for Zinha, and the crowd responded with their loudest ovation since Chicharito left the game.

By the late stages of the match, Mexico had dropped into a five-deep defensive line, with Dos Santos staying up top as the lone forward, fellow substitute Carlos Vela playing as a withdrawn forward, and the midfield trio rarely venturing near the Paraguayan area. As both team made further substitutions, players and coaches alike seemed content to see the game off. Perhaps Paraguay was saving something for their upcoming friendly with the U.S. Men’s National Team, because they certainly did not prove to be much of a test for Mexico.