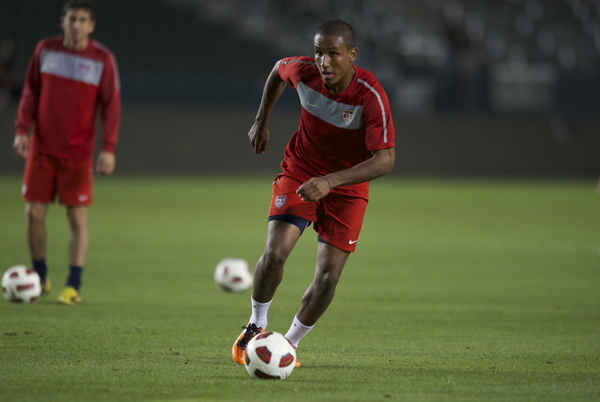 Juan Agudelo, who many are calling the "Next Big Thing" in American Soccer, training with the U.S. Men's National Team earlier this year. Photo: John Todd, isiphotos.com.

With the U.S. Men's National Team set to take on Paraguay in an international friendly this Tuesday evening (7 p.m. PDT; Fox Soccer Channel, Telefutura), Corey checks in with another look at some of the stories behind the American team.

Full disclosure: I want Juan Agudelo to become an elite player and set a new standard for American strikers. I like his confidence. I like his energy. I began using the hashtag #Agudelicious on Twitter.

But I have been hurt before.

The United States Men's National Team has experienced its share of successes and failures. However far we have progressed, we live in constant yearning for the next great talent. It was supposed to be Freddy Adu. Then Jozy Altidore. And don't forget Danny Szetela, Eddie Johnson, or the host of other poster-children of unfulfilled promise.

Not all of these players are lost. There is still time for Adu and Altidore to develop. If they do not, however, we should at least learn from their stories and use that knowledge to guide rising stars in the future. We should know better to fall in love with our eyes closed.

Which brings us back to the latest phenom. Late in the 2010 MLS season whispers of "Juan Agudelo" emerged from shadows cast by two designated players and a new stadium. Staring playoff elimination in the face, the 18 year-old conjured something out of nothing, assisting Juan Pablo Ángel's goal. Of course, the Red Bulls quickly conceded to the Earthquakes, ending their playoff hopes. Suddenly, Agudelo was available for his first call-up to the national team.

When he arrived in South Africa the hype was still in its infancy. When he left, Americans were hopeful, if not hype-ful. Yes, it was merely a friendly, but Agudelo's cheeky match-winning goal provided one of those "Please, be the real thing!" moments.

In week one of the 2011 season - following a short reprieve from the simmering mania - Agudelo's clinical finish earned a victory and MLS "Goal of the Week" honors. It was back on. After Saturday night's right-place-right-time equalizer against Argentina, it was raging.

It feels good to be excited about the kid's future, as well as that of the national team. We should enjoy every moment and give credit where it's due. But we should also remember that this is a journey, not a destination.

Altidore showed tremendous promise in MLS. His move abroad did not seem terribly premature at the time. Managerial changes and stiff competition, however, severely curtailed his playing time. Now, he is at his fourth club in three years and, by most accounts, appears to have plateaued in his development.

There is no one-size-fits-all formula for becoming a good player. For all we know, Agudelo could move abroad this coming summer - to widespread opposition, mind you - and prove us wrong. He could also stay in MLS for years, ensuring playing time but stunting his growth.

Whatever his path, it behooves American soccer fans to be patient. We don't need the best striker in the world. We need players that can consistently play at a high level over a long career. We need lasting hype, even if it's a more modest blend than the type that puts 78,936 people in the Meadowlands on a cold spring night.

Corey Bennett is a Co-Founder of Church of Soccer, licensed attorney, freelance writer, and aspiring soccer magnate. Follow his exploits at @churchofsoccer and @coreybbennett.