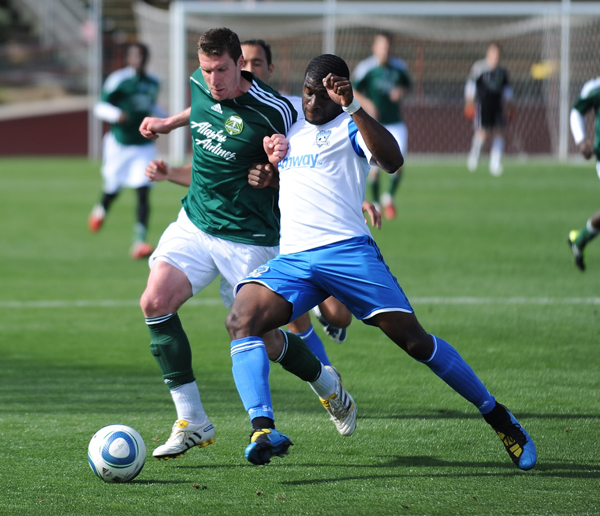 Kenny Cooper and the Portland Timbers FC will travel to Buck Shaw Stadium in April to face Brandon McDonald and the San Jose Earthquakes in the next round of 2011 U.S. Open Cup qualifiers for MLS teams. Photo: Joe Nuxoll, centerlinesoccer.com.

Qualifying matches for MLS teams striving to make the 2011 U.S. Open Cup began earlier this evening, with one game in particular being of interest to the San Jose Earthquakes. At the University of Portland on Merlo Field, the Portland Timbers FC earned their first meaningful victory as an MLS franchise in dispatching Chivas USA 2-0 behind goals from Jack Jewsbury and Eric Brunner. The reward for victory is a second-round qualifying match against the Earthquakes on a date in April to be determined.

While not unusual for MLS teams to play these earlier U.S. Open Cup matches at smaller venues in their home cities, the Timbers surpassed expectations by selling out Merlo Field to the tune of over 5000 forest-green clad supporters. Braving the wind and steady rain that fell throughout the game, the show of support was encouraging for a team that is still waiting to move into their renovated soccer stadium, recently rechristened Jeld-Wen Park.

With both teams fielding starting XI line-ups that featured many first team players, the mood was set for an active and intense contest. The home side was stronger throughout the match, and received their just reward when Jewsbury scored in the 84th minute with a long-range shot that skipped under the arms of the Chivas goalkeeper and just inside the post. Less than five minutes later, Brunner doubled the Timbers lead after netting a rebound off his own missed header from a Jewsbury corner kick. A clearly deflated Chivas side conceded defeat over the ensuing minutes until the final whistle was blown.

While no information has been released on the date and time of the San Jose Earthquakes home match with the Portland Timbers in U.S. Open Cup qualifying, expect the game to be in the month of April on a Tuesday or Wednesday evening. In years past, these qualifying matches have been played at Buck Shaw Stadium at a place in the MLS regular season schedule that has the least impact on the team. The two weeks from April 16th to April 30th make the most sense, as both the Timbers and Earthquakes will be located on the west coast. Check back with Center Line Soccer for all the information you’ll need when the match details are finalized.

UPDATE — The Chicago Fire defeated the Colorado Rapids 2-1 on Wednesday evening to advance to the third and final round of MLS qualifying. The Fire will travel to the winner of the Earthquakes/Timbers match to play for one of the eight entries made available to MLS into the U.S. Open Cup round of sixteen.